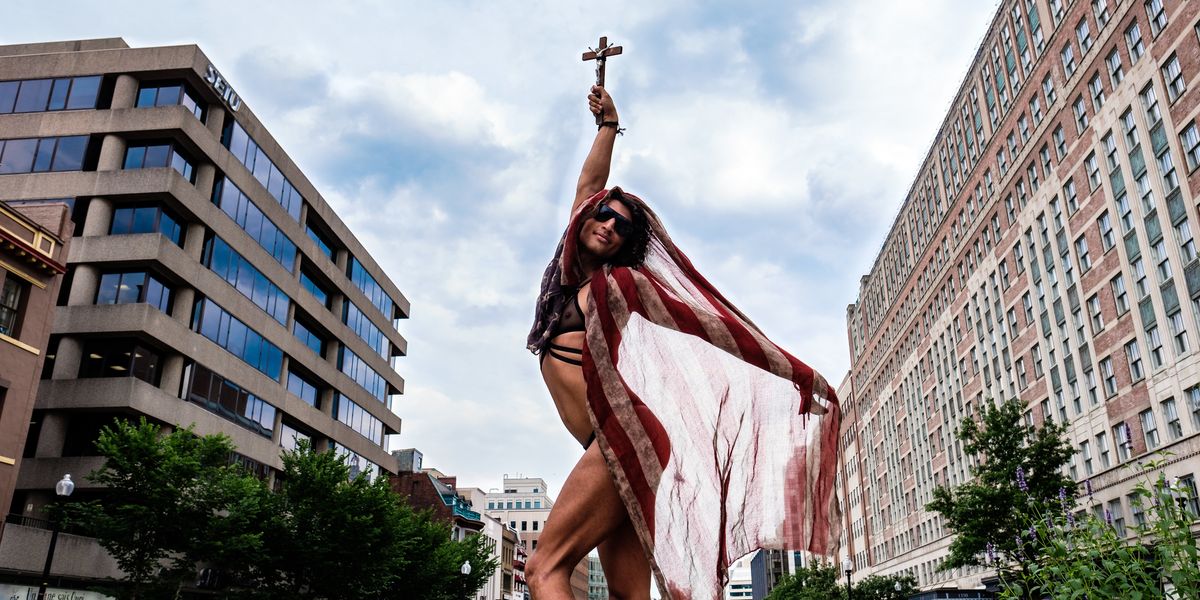 Qween Amor wasn't always this brazen. Now known for her nearly naked twerking protests, the 31-year-old's approach to activism and her trans identity started off slow.

"For 24 years, I was just a gay boy," she says. "Once I started dancing, that all changed. I was able to have a very clear sense of who I was and who I wanted to be. It had all been an unfolding process."

Donning fetishwear and waving a crucifix only slightly smaller than her own curly-haired, devil-horn-topped head, these days Qween Amor twirls and twerks her way through Pride events and political protests around various US cities. She's garnered a sizable fanbase on Instagram, where anyone can see her bare-assed dominations of cop cars, her graceful spins into traffic intersections while wielding poster boards promoting gun control, her public fountain "baptism" during the 2019 NYC Dyke March. Qween Amor's freeform, joyous dancing to Madonna's "Like a Prayer" in front of the infamous Westboro Baptist Church, "godhatesf*gs.com" banner hanging proudly on its hateful edifice, was made for social media.

Watching via Instagram, you realize the guts it takes to protest in this way. If you were there IRL, would you film her — or would you join her? "There's a sense of unity, this thing where you can bring people together in an instant," Amor says of her bystanders. "It doesn't matter who you are, where you come from, what you look like, your orientation, your gender. In these moments, we are all just people."

During childhood, Qween Amor experienced discrimination both at home and in school. "I was really depressed as a kid," she says. "Probably about 16 years old, my mother kicked me out of the house." Between shelters and a few brief stays with friends, Qween Amor's housing was unstable until very recently.

Leaving her hometown of Orlando in 2012 to join Occupy at New York's Zuccotti Park, her conversion van became her home and income source, shuttling activists to rallies and actions and court dates — a rideshare service that regularly round-tripped from New York to DC. Eventually, the van caught fire. That's when she started dancing in public.

"When I used to go out and dance, I'd be fully clothed, and I wouldn't be too loud. I wouldn't do too much," she recalls. "But as time went on, I threw all of that out the window and I picked up a cross. I was like, if I'm going to do this, I'm going to fucking do it. It didn't take long for me to realize that the most important thing for our community right now is to reclaim space."

After a stint sleeping and dancing outside the Office of Veterans Affairs in DC, she moved to the New York subways, busking to earn earn money for food or an occasional hostel stay. One day it occurred to her to offer onlookers a guestbook of sorts:."I wanted to know what people thought," she says. The pages soon filled with positive responses; there wasn't a single negative comment. This became her motivation to keep going.

At the root of Qween Amor's mission is a coming together of all peoples; otherwise, she says, "we're not gonna make it." But a collective fight does not eclipse the urgency of intersectionality; the battle Qween Amor wages with her dancing-as-preaching, twerking-as-sermon strategy makes clear the critical connections between oppressions, with special care to recognize who is disproportionately affected, as well as who's responsible.

These days she lives in New Orleans and is studying for her Emergency Medical Technician certification, funded in part by sex work for lack of financial aid. She expects to be certified in December and aims to apply these new skills in her activism. "I saw one woman who was protesting and she ended up twisting her ankle," Qween Amor recalls. "At the time, I didn't know how to do a splint. I can do a splint now."

Next up, she'll get her nursing degree — the plan all along, repeatedly delayed by her arrest history. "I've been arrested so many times that they've delayed my application to get into the nursing program," she says. "So I had to wait a semester. I don't have any felonies… but there's a lot of disorderly conduct, disturbing the peace, lewd conduct." Charges incurred during her protests are routinely dismissed.

When faced with the prospect of arrest or worse, Qween Amor won't stop dancing. "I'm aware that every time I go out and I dance that I might be assaulted, that I might get arrested," she says. "Knock on wood, I have survived all of the encounters. Muhlaysia Booker did not survive her encounter. Layleen did not survive her encounter." She's well aware that more than 20 trans and non-binary people have been murdered or have died by suspicious circumstances in the US this year alone.

To protect herself — in life, in protest — Qween Amor prays. "A lot of people think what I do with the cross and how I use religion in my work can be seen as disrespectful, or that I'm making a mockery out of it, but I believe in God," she explains. "So a lot of what I do is to dismantle the foundation of religious society that says your faith justifies violence."

Maybe Qween Amor's bare ass in broad daylight seems a shock tactic to passers by, but it's a shock people seem to benefit from. She's startling privileged folks out of their complacency in a systemically oppressive, patriarchal society. She's making space in their minds for her messages and mission. When strangers become active participants, cheering or dancing alongside her, the positive impact of her activism is at its greatest.

"It's about liberating the human spirit," she says. "It's about showing people who they are, and the very heart of our essence."

Activists frequently put their bodies on the line. For marginalized activists, the physical risks are even greater. Every time she twerks against conservatism, every time she dances in defiance of oppression, Qween Amor puts herself in peril — a risk that not everyone can or should take. But activism is now intrinsic to her identity, entwined with her faith. Moving people is what moves her.

"I can't let my suffering go to waste, if that makes any sense," she says. "I have a fire inside of me. I have the will to fight."