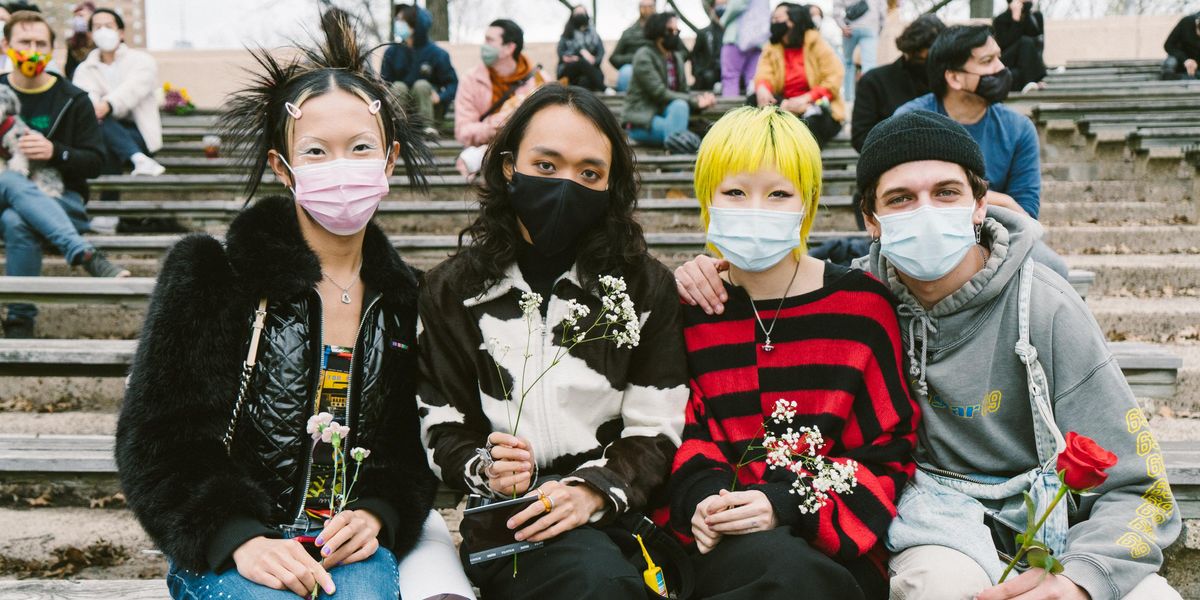 Amidst waves of racist violence against Asian American people during the COVID-19 pandemic, it has been easy for LGBTQ voices to get lost in the mix. So this past Saturday, Asian, Black and Latinx organizers in New York put together an event that would allow the Asian queer community to assemble, grieve and also feel some much-needed joy.

Related | Protect Our Elders: A Movement Against Anti-Asian Hate

"We were very intentionally calling it a community gathering rather than a rally," lead organizer Sammy Kim tells PAPER. After attending various protests and rallies happening in response to racism against AAPI people over the past few months, Kim saw the need for something more gentle-minded.

"A lot of these events can be quite exhausting. People in the streets shouting and chanting, marching. As a non-binary Korean sex worker, I didn't feel like the rallies were created for me. I felt compelled to create a space that was for us, by us, reimagining or rethinking what these gatherings could look like — more restful and tender."

From the early afternoon onwards, a diverse group assembled in the East River Park amphitheater to hear music, poetry and guided meditation, with a focus on care, healing and connection. Attendees were asked to bring flowers and, of course, their best social distancing behavior, as they enjoyed a lineup of queer, trans and nonbinary speakers, musicians and community leaders led by MC Jezz Chung.

One highlight for Kim was LoAn Nguyen, the parent of a queer trans daughter and member of the PFLAG AAPI rainbow parents coalition in New York. "We invited her to speak and share her experience as the parent of a queer daughter who practices mindfulness and connection. A lot of friends came up to me afterwards and said that having her share, they didn't realize it was what they needed to see [that day]. A lot of young queer Asians, we have fraught relationships with our families."

Another powerful moment came when musician Clara Lu played the guzheng, a traditional Chinese instrument, for the assembled crowd. "Thats when I started crying," Kim recalls. "It had deep ties with our ancestry and it was some kind of portal for me, it really connected."

Alongside Kim and Chung, the event came together with the help of some of the New York queer community's best, including Stevie Huynh, Nicholas Valite Andersen, Oscar Nuñez, Mohammed Fayaz, Adam Rhodes, DeVonn Francis, West Dakota, Angela Dimayuga, Rohan Zhou-Lee and Vincent Chong. "We were trying to create a space for our community to feel cared for, and I also felt very cared for and very held by them," Kim says of their co-organizers.

The event provided a template for what the future could look like for the queer AAPI community in New York as it confronts ongoing challenges of racism and violence.

"We have so much power collectively, and I really believe that this is our moment right now, a big opportunity to really be effective and intentional — with not just the queer AAPI community but our Black siblings, and our Latinx and Indigenous communities as well," says Kim. "This is a big moment to learn from one another. Although our struggles are different, they are aligned because we are oppressed by the same powers. Your liberation is my liberation."