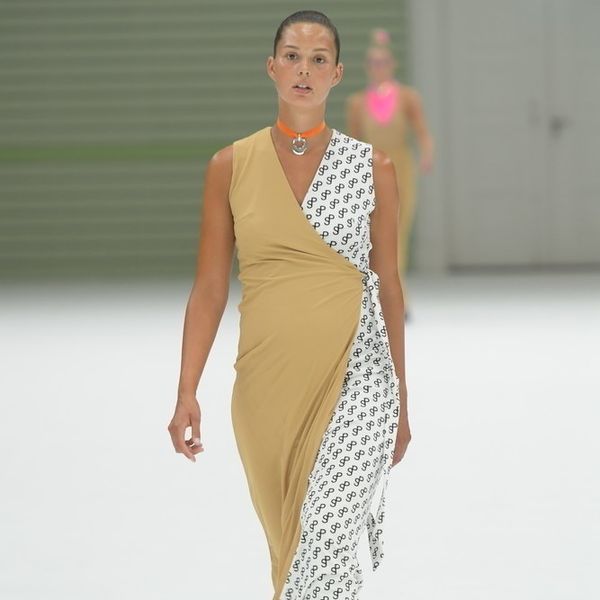 Cheers to Pregnant Models on the Runway

In an Instagram post, Lovejoy revealed that multiple women who worked on the show were pregnant, and that kids were present on set. She also modeled while holding her baby, Nomi, in Astrid Andersen's presentation earlier in the day, during which multiple families posed frozen, as though they were living portraits.

New York Fashion Week was ahead of the curve (the belly?) when it comes to casting pregnant women, but it's still pretty rare. At Gypsy Sport Spring 2016, a pregnant model named Diandra Forrest walked the runway, and the next season she closed the show while holding her baby in her arms. Eckhaus Latta's Spring 2018 show made waves for featuring a heavily pregnant model, artist Maia Ruth Lee, who at that point was just a month out from her due date; the label and casting director Rachel Chandler earned well-deserved accolades for the choice. Veteran Vogue Runway director Nicole Phelps wrote on Instagram that she had been attending fashion shows for 21 years, and only "seen a pregnant model on the runway exactly one other time."

Related | At the Whitney, Eckhaus Latta Makes Shopping an Art

Supermodel Slick Woods also posed pregnant on her the September cover of Elle UK. We hope to see her cast in numerous runway shows this September.

For centuries in Western culture, pregnant women were covered up and hidden away — the word "pregnant" was even deemed too vulgar to use on mid-century American television shows like I Love Lucy. Before Demi Moore's iconic nude cover of Vanity Fair, pregnant celebrities were rarely even photographed at all, and the dominant culture is still cruel to women who gain weight with their pregnancies, or struggle to lose it after (all of those Kim K memes were vile). Women are still kicked out of businesses and offices and Chik-Fil-A's for breastfeeding, aka literally nourishing a child.

So we were pleased to see designers like Saks Potts and Andersen going in this direction. The fashion industry serves as a bellwether for that which is considered beautiful and inspirational, a category in which pregnancy should of course be included. What could possibly be lovelier?