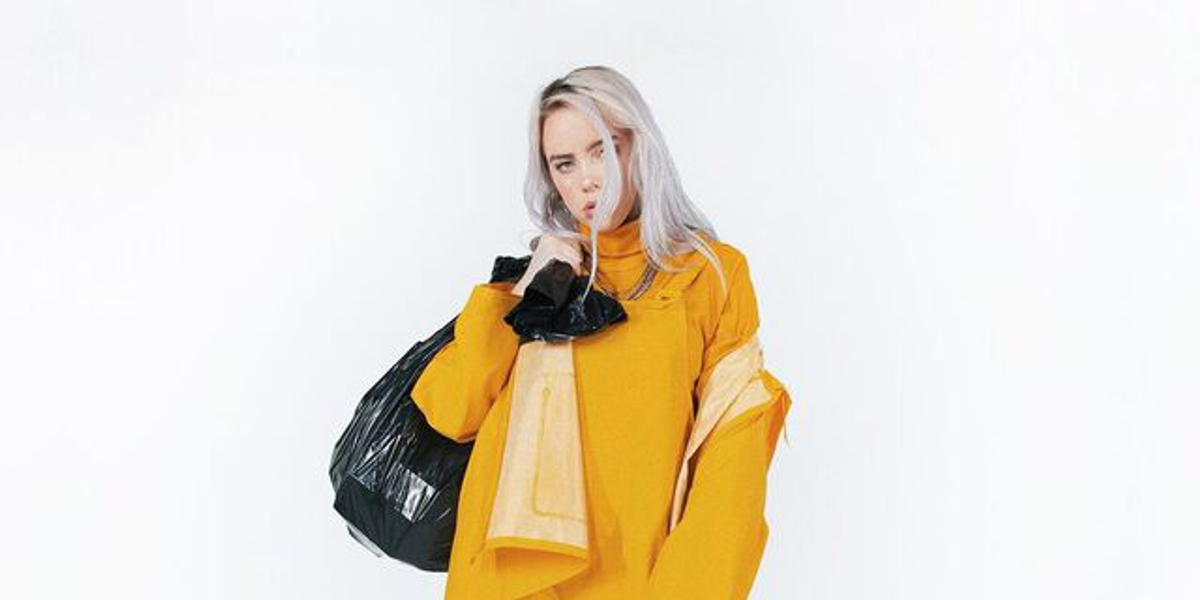 Upon meeting Billie Eilish at NYC's famed Soho House, it's impossible to ignore her presence. Wise beyond her years with a keen eye for fashion, it's also hard to believe she's only 15. "I like to be remembered, so I like to look memorable," the L.A. pop phenom explains. "I think I've proved to people that I'm more important than they think." And she's right -- her icy white-blonde hair, perfectly defined eyebrows, giant hoop earrings and avant-garde cargo pants make her stand out in a crowd. But it isn't her look that's gotten people's attention: it's her voice.

At only 13-years-old, Eilish dropped her first haunting single, a ballad titled "Ocean Eyes," which took on a life of its own on Soundcloud. Her dance teacher originally asked her to write it for a recital, but it resulted in her catching the attention of a variety of labels. But don't expect her to be just another pop star puppet. "I don't like to follow the rules at all," Eilish says. "If somebody tells me to do something, I'll always do the complete opposite of what they tell me to do." And if you're looking for her to collaborate with Ed Sheeran or Lady Gaga, forget it: she only wants to work with rappers (she's a huge fan of Tyler, The Creator).

While her first two singles "Ocean Eyes" and "Six Feet Under" fall more on the pop spectrum, Eilish's latest release, "Bellyache," has more of an R&B production angle -- something that's going to become more prominent as she drops more singles. We caught up with Eilish to talk creating characters in her songs, her idolization of rappers, and why she might be the next Lorde.

I heard you grew up homeschooled. Is that still the case?

I've been homeschooled my whole life. I don't even know what school is like. My brother is homeschooled also, so it's something we do together. Also there are co-ops and homeschool events. There's something called Park Day where we meet up with a bunch of homeschoolers every other Thursdays. Homeschooling has been really interesting because it's kind of my parents' way of having us focus on things we're really interested in instead of being at school and being taught things that you don't really need to know in life -- things you're never going to remember or use. It was a good way to do what I was interested in instead of doing something I was forced to learn.

How did you first become interested in making music?

I've been singing since I was a tiny child. I was always singing and making noise. I had to be shut up because I was making so much noise. I learned ukulele and piano on my own -- my dad taught me some. I've been in a choir since I was eight-years-old, so that's where I learned my technique and how to not ruin my voice. Some people don't know how to treat their voice. I've always known that singing, writing music and performing is what I've wanted to do, so I'm glad that it's happening.

In meeting you, you seem older than you are. Do you get that a lot?

Yeah, it's kind of always been like that. When I was 12, I went to the county fair and did that "guess your age" thing. This woman guessed I was 20, and I was like, "Well, I'm 12, so no." It's been really weird. I never really think of myself as the age I am, but I don't really think of myself as any other age. Thirteen-year-olds look like they're five-year-olds or 20-year-olds.

You've gotten quite a few comparisons to being the next Lorde. Do you see yourself going in that path?

I don't know who "the next" I am. Maybe. I want to incorporate a lot more dance and fashion stuff. I want to work with more of the fashion world's artists--like Tyler The Creator has his own line.

What do you think makes people think of you as pop's next "It Girl?"

I'm really different from a lot of people, and I kind of try to be. I don't like to follow the rules at all. If somebody tells me to do something, I'll always do the complete opposite of what they tell me to do. If somebody starts wearing something a certain way, I'll wear the complete opposite of that. I've always worn what I wanted to and always said what I wanted to say. I'm super, super out there. I try to dress this much above crazy. I like to be remembered, so I like to look memorable.

I think I've proved to people that I'm more important than they think. If I'm sitting there, if I tell you something, you're not going to not listen to me. I don't put up with that stuff. I've made my point to people that I have things to say and I'm going to say them, and if they don't want me to say anything, then I'll leave. I'm kind of intimidating, so people will listen up. I'm kind of scary. A lot of people are just terrified of me. I have a resting bitch face.

How did you decide on "Ocean Eyes" being your first single?

Well, my brother wrote it. I'm a dancer -- I've been one since I was eight-years-old and I was in a dance company with competitions. I danced 11 hours a week usually. Before "Ocean Eyes" came out, my dance teacher asked if I could write and produce a song in a "contemporary dance way" so he could use it for one of the recitals I was going to be in. I was so excited because all of my friends would be dancing to it. My brother came to me with "Ocean Eyes," and it was weird because it was exactly what I was thinking. It was like he jumped into my head, wrote something and came out and gave it to me. I loved it. We just recorded the vocals, did a ton of layers and sat in his room dancing to it to see if it was danceable. Then we finished it. We put it up on Soundcloud with a download link for free. We were just using it to send a link to my dance teacher and had no expectations for it. Overnight it got a thousand plays and we were like, "We made it. We don't need to go any further." We thought we were kings of the world. It all kind of blew up in my face. It completely went over my head for months. I sang "Ocean Eyes" when I was 13.

Who do you look up to the most?

Rappers. Tyler, The Creator, Drake, Earl Sweatshirt, A$AP Rocky and Miguel. I really respect Tyler [The Creator] because he's a genius. I grew up listening to the Beatles, Green Day and Avril Lavigne.

Listening to the songs you've released thus far, I wouldn't see you going in the R&B or rap direction.

I know, it's weird, but we're kind of going towards a hip-hop side. The production is curbing towards hip-hop and R&B because that's what I listen to. It's kind of trap, R&B, mellowy -- the songs are still the same. They haven't really changed except what they're about, because I'm older and different and have gone through different things than what happened a year ago.

Your latest track "Bellyache" just came out. What was the process of making that song? What's it about?

Me and my brother write together always. We like to completely make up things and become characters. We like to have songs that are really fictional. That song is about killing people and feeling guilty about it. [It's about] getting a bellyache because you just killed a bunch of people, which you would if you just killed a bunch of people if you were human, but psychopaths don't really have those feelings. We kind of just became this character that knows they're out of their mind, but also doesn't at the same time. We have a bunch of songs that are like that. You don't always have to feel the way you are while singing. You can write songs about being sad and not be sad. You can write songs about being in love with someone and not be in love with anyone. It's fun to become somebody else or become nobody -- just your imagination.

How much of your songs are characters, versus how much of them are you?

What's the hardest thing you've had to write about?

I haven't gone through a lot of terrible stuff. I think the main thing I've written about is this boy who really tore up my whole self. He kind of took over my everything for about a year -- it was really hard. People hear about it and they're like, "It's just a boy," but it had a huge effect on me. I was always distracted by this. He was terrible, and he treated me terribly. I've written a gazillion songs about him.

Has he ever seen you sing?

He's heard a lot of them. When we were kind of dating, he was on Facebook with me and my brother asked me to play this song we wrote, and it was completely about him and how he destroyed me. He was like, "Huh, new song." He knows and sometimes brags about it, which is so annoying. But, whatever.

Will you be releasing a full-length or debut EP?

We have a bunch of singles at first, but summertime will be either an album or an EP on Interscope. The people there just have a feeling that I just trust -- they just get my ideas.

Who would you want to collaborate with?

Rappers. The first one would be Tyler, The Creator. I really want to do something with Earl Sweatshirt and A$AP Rocky.

I envisioned you wanting to collaborate with pop stars.

Nope [laughs]. I would only want to collaborate with rappers.

What do you think makes your music stand out?

We try to write what everyone is thinking, but no one says. We try to say stuff that doesn't have to be that deep: it could be something random, like "I feel sad," but you say something way deeper in a certain way that makes sense, but you haven't really thought about. We try to be super creative with the lyrics. We try to be really interesting with the lyrics and really conversational -- a lot of them are talking to a person in a poetic way.