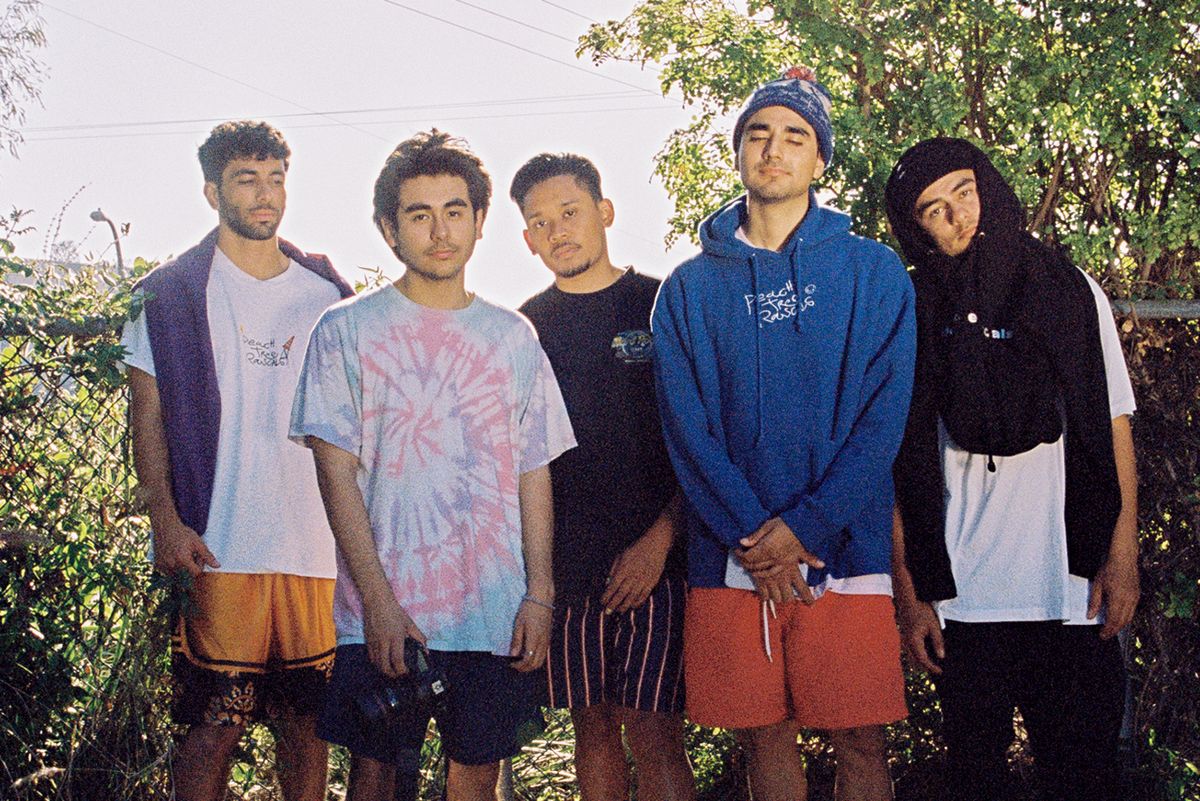 It's early afternoon on a Friday, and the members of Peach Tree Rascals — Dominic Pizano, Issac Pech, Jorge Olazaba, Tarrek Abdel-Khaliq and Joseph Barros — have just woken up, scrambling to make it onto the Zoom call but cracking jokes the minute they connect. They've just pulled an all-nighter making music and they are ready to talk about some of their latest work: the single, "Fumari," and its accompanying visual, which premieres today on PAPER.

The track is their final release of 2020 and it has all the elements of a solid wrap-up to an otherwise straining year. The lyrics and vocals — a highlight being the song's high-energy rap verse — make "Fumari" relatable, but the inclusion of instruments is a crucial component to making the song a hit.

"Usually, when we make a song, I always really want more strings on it," Pizano said. "For 'Fumari,' it was always empty and it just needed to be filled up." Barros added, "It just didn't hit right."

The final product, complete with instrumental bliss, makes a meaningful addition to Peach Tree Rascals' discography. The "Fumari" video embodies the kind of serenity you want to dance in; it's carefree in energy without being careless, all while donning fast-paced, handheld camera movements and a plot featuring a very daunting lunchbox thief in a makeshift heist.

Olazaba, the visual creative behind Peach Tree Rascals, was inspired by cult classic Pulp Fiction and the music video for "Sabotage" by the Beastie Boys. But if the "Fumari" visual feels familiar, especially when considering the group's previous creative looks, that's the point.

"I try to come up with fun, relatable concepts for every video," Olazaba said. "But I do try to keep some semblance of cohesion across my work. I think it's part of making sure we keep true to our brand and self."

While that throughline stays consistent in their branding visually, their musical ventures are more of a mixed bag. Peach Tree Rascals hit the mainstream when their single, "Mariposa," went viral on TikTok and, though the members believe in the song, it isn't the only track that shines a light on their collective creative power. Likewise, "Fumari" isn't the single song that embodies who the group is; there is more to their sonic picture.

"You can't really showcase us with one song," Abdel-Khaliq said. "I think you have to look at everything as a whole. It's like a puzzle, and ['Fumari' is] just another piece of that puzzle."

The group's sound is a unique blend of their influences, which include classic greats like Stevie Wonder and Frank Sinatra, with more modern favorites in artists like Kendrick Lamar and Alabama Shakes. And the variety is apparent in their music; songs like "Mariposa," for example, have a vibrant, upbeat take on the Peach Tree Rascals vibe, while tracks such as "Violet" take on a softer tone, both vocally and sonically.

"Even though we all come together and have a common ground with our taste in music, we can all listen to the same stuff, we each individually have our own taste and our own inspirations that completely differ from one another," Abdel-Khaliq said. "So, when we like work and each of our inspirations show and we find a way to make it work, it shows all of our influences in one, making it something different than the last one."

In the spirit of finding common ground, the group created a 10-song playlist that inspired each of them while creating "Fumari." But Pech is quick to note that calling each track a direct inspiration might be a stretch of the truth. "It's more so just the type of feeling you get from listening to the song," Pech said.

Hear the playlist and a bit from Peach Tree Rascals about why each track made the cut, below.

Barros: I would say the rhythm and the energy for that song is the same as "Fumari," but "Fumari" is a little bit more energetic.

Abdel-Khaliq: This is one of my first favorite songs by Russ. Just something about right when the song starts, your head starts bobbing and you're in the song and everything just hits in a way where you need to move and everything. That's a direct inspiration to "Fumari." That's the kind of song we wanted to make, which is when you start it, you're in the song, you're moving.

Abdel-Khaliq: Oh yeah! It wasn't really a house song, we just like—

Barros: We were fucking around and we were like, "Dom, put some house drums on it." [Laughs] Me and Tarrek just started dancing for like an hour, and then we were like, "Alright, let's change it up."

The Beatles — "Here Comes The Sun"

Barros: I'd say, The Beatles, they had a way of all putting their collective effort into one and they made it blend in together. "Here Comes The Sun" was by George Harrison and they all did their part to make it sound what it needs to be.

Pizano: I put this one on there because it's funky and ["Fumari"] is funky.

Pech: I put that song because, in the second verse on that, he's rapping like a motherfucker. He's just rapping so great and amazing and the song is so uptempo, and you really have to pay attention to keep up with the musicality of the song and the subject matter of the lyrics at the same time. That's what I was kind of going for in my verse for "Fumari."

Tyler, The Creator — "I THINK"

Abdel-Khaliq: That bouncy rhythm, the groovy rhythm and it's just a great song.

Pech: Undeniably, once the drums come in, you can't not move your foot up and down at least or bob your head, do a backflip or something.

Barros: Same with that, it's the rhythm of that, the drums. It's a constant rhythm where, as if you're in your car, you could bump it and your head will be bumping the whole time.

Pech: Also, picking 10 cars, as far as inspiration for us, there has to be at least one Mac Miller song on there. Probably for every song, because he was a pretty versatile artist.

Barros: They're good at putting instruments together and making people dance. When you hear an Earth, Wind & Fire song, it's usually upbeat or they make you feel something. And "Fumari," you get the best of both worlds. You get the upbeat tempo... it makes you feel something.

Barros: The hook is very catchy on that song, and the same with "Fumari." When Tarrek sings the hook, you can't not sing with it and dance at the same time.

Barros: When I wrote the chords for "Fumari," why I put [this song] is because, once you hear those first chords, it catches your ear instantly and it gives it that attack. It gives it some power behind it.

Pizano: I was about to go to sleep and I walked by Joseph's room and he was playing those chords, and it caught my attention right away. And I had to ask him, "Yo, what the fuck? What is that?" [Laughs]

Barros: Those chords in "Don't Wanna Fight," the chords in there give the song power for the vocals, as well, to complement them.