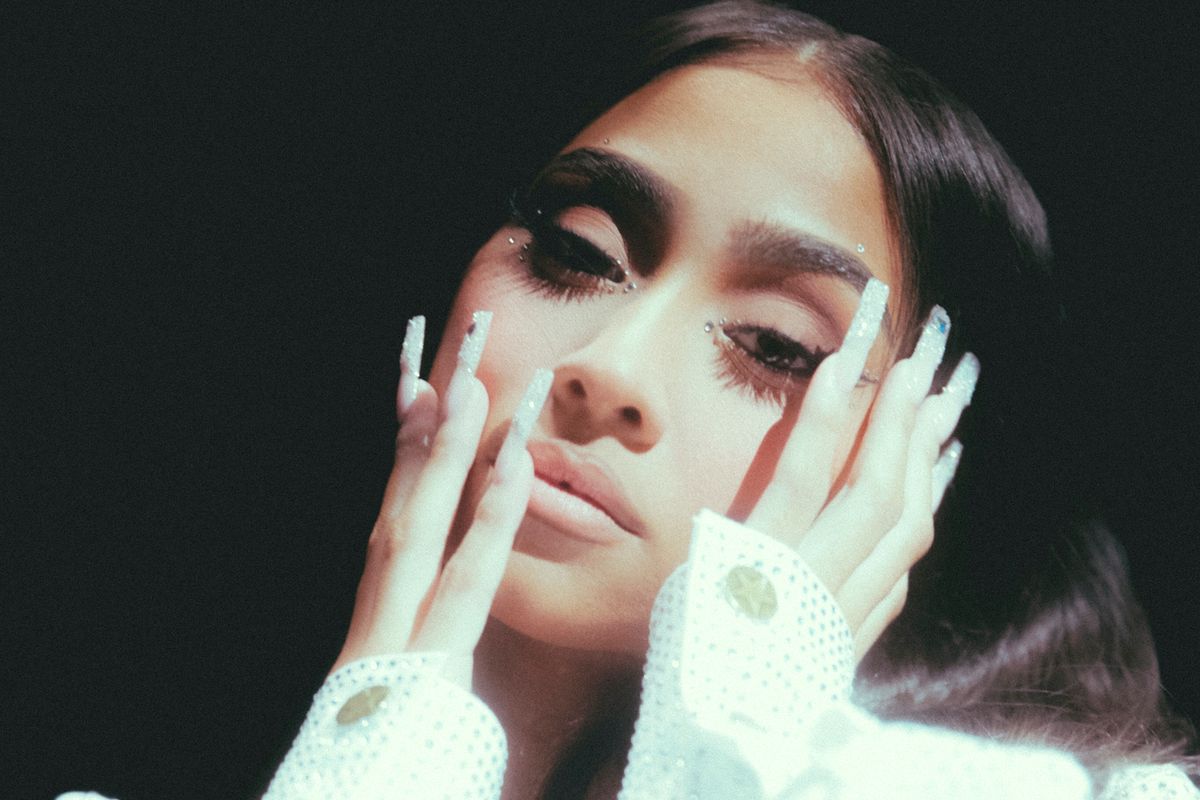 Up until a few years ago, Paloma Mami had never considered making music. Today, the New York-born, Chilean artist's fans are so fervent they literally seek her out — like, in person. They've shown up at her house in Santiago. They've even gone so far as to ask for her at her grandparents' home.

"My grandparents just don't know what to do," she tells PAPER with subtle laughter. "My grandma's just out there gardening and people come ask her for pictures."

That folks approach her abuelos is a somewhat comedic scenario to imagine, but in reality, it's obviously invasive. Bothering the relatives of a famous person is a bit much, no?

In the US, Paloma Mami could still go unnoticed in most crowds, but the 21-year-old's popularity here is growing quickly: especially with "QueLoQue," a collab with Major Lazer that hit the top 20 in dance and electronic songs on Billboard. Earlier this month, the video for Paloma Mami's new single, "For Ya," earned a million views within a day of release. It's since passed the four million count. (That's also approximately how many fans are following her Insta, by the way.)

Paloma's music is written in a kind of Spanglish, but she appeals even to those who find language a barrier to likeability. (A banger is a banger is a bop is a bop, OK? No matter the language.)

Not too long ago, Paloma told an interviewer that a type of fronteo, or fronting, in her messaging was a must — but the lyrics of "For Ya" are decidedly vulnerable. The track depicts a hopeless situation, a story of unrequited love: "I give everything for you," she sings, "knowing you wouldn't do it for me."

Paloma's tone here is high and soft, exuding a sense of fragility. In the video she follows a white light, into which she plummets down, down, down. It's a willing, sad surrender — albeit to a swaying reggaeton rhythm.

There is an intimacy to Paloma's words, and a desolate undercurrent beneath her often delicate delivery. Dropping your fronteo is another kind of empowerment, though — the kind that's rooted in being true to and honest with yourself.

Despite its sense of authenticity, however, "For Ya" actually isn't her own story.

We often like to believe that songs are based on lived experience. Most often it's women who are prescribed this assumption — mainly because of the sexist falsehood that we are overly emotional, particularly about relationships. What else would we be writing about besides these alleged constant emotional undulations?

But Paloma looks outside herself, finding a greater arsenal of widely relatable subject matter especially in the women of her family, who outnumber the men. She may be the narrator, but it's not a memoir. She's conveying a blend of their experiences with partners who didn't return in equal amounts the wealth of love given.

"I think a lot of people can relate to that," Paloma says. "I think it's something that's common, sadly, just giving your all to a person and it not being reciprocated."

This isn't a situation Paloma herself is in right now. In fact, her boyfriend Roa helped write "For Ya." Their songwriting process feels natural; it flows.

"Songs like 'For Ya,' for example, it's a heartbreak song. It's crazy because we're in this relationship but we still can imagine another relationship," she says. "We put ourselves in other people's shoes, a different situation."

Paloma is an art and theater lover, and it's easy to predict that films or a TV series are in her future. She finds something personal, regardless of whether the story she's telling is her own, that anchors her performance — this is basically method acting.

Paloma was raised in New York, a fact she calls a blessing: "I learned a lot culturally," she says. Her summers were spent in Chile, though, and by phone she stayed in touch with relatives there year-round. (Right now, her dad is in New York, but her mother and sister — who, by the way, is an incredible MUA and influencer — live in Chile.)

It was when she relocated to Santiago some four or five years ago that Paloma decided to give music a go. The latest wave of Latinx reggaeton, trap, and R&B was booming, and it blew her mind. She wanted in.

"I was like, wow, I could definitely do this music as well. I could try it out," she recalls.

The move was unexpected, but not totally unprecedented: Paloma is and has always been a lover of the arts, from theater to fashion to painting. (Check her Instagram closely and you'll see her work on her own clothes. Her illustrations might soon appear as merch, she adds.)

Paloma says her relocation to Santiago offered what was, for her, the perfect setup: nobody knew her in Chile. "I'd be starting as an unknown person," she remembers thinking.

A chance meeting with a producer turned to a session, per Paloma's request. "I didn't even know what a studio looked like," she says, "but the first time I went in, I came up with 'Not Steady.' That was the first song I ever made."

Kismet can be credited for how "Not Steady" came about, but Paloma, had she not found that specific producer, would likely have found some other in. It just seems impossible that Paloma wouldn't be a singer: her vocals, throaty but feather-soft, are in part why. The way she fluctuates in tone over the mold of any beat, weaving throughout in surprising twists — there's something fresh but also deeply satisfying in her flow.

On "Not Steady," the fronteo was all about not wanting a partner, 'cause she didn't want or need one. The single took off. Later, she warned, "No Te Enamores de Mi" ("Don't Fall in Love with Me"). Another success.

Maybe Paloma's singing career truly was meant to be. But even fated blessings are not without their difficulties. Within a year of releasing her first two singles, she felt compelled to drop a bop aimed at her critics.

In "Don't Talk About Me," she breaks from the musicality of the cheeky R&B antagonism, slowing things down to plainly strike down the shit-talk: "They say I'm not talented, they say I'm not Chilean, they say I'm hecha (i.e. has had plastic surgery). For real, for real, you all are talking a lot — but who's listening? While you're looking bitter, I'm looking bien rica."

In the same track, Paloma manifests a Grammy win. "I didn't come to snack, I came to eat," she says.

"Fingías" builds more pillars of acknowledged self-worth. The narrator on this number knew all along their partner was deceptive. Now, they say they still love the narrator — but they're done, they've moved, and they've taken with them a healthy blend of apathy and antipathy for their former partner.

Her discography is composed so far of a slew of singles, but a full-length debut is coming soon, Paloma says. "For Ya" is the first teaser in what she says is a diverse collection of songs, many of them a "hybrid of sounds," featuring producers from "all around the world."

"With this album, it's going to be literally something that I know for a fact that Chile and everywhere, they've never heard before, that's never been done in Spanish," she says. "It's a crazy new sound, and I'm really excited for everyone to hear."

Having gotten accustomed to celebrity in Chile, Paloma is ready for the increased intensity, the scrutiny, and maybe the need to write another song like "Don't Talk About Me."

"It's fine, because it comes with it. I really don't mind — as long as people don't show up at my house," she laughs.