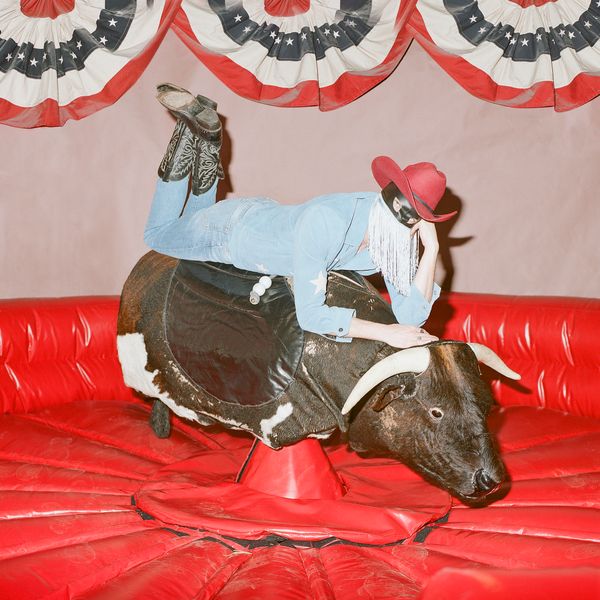 Though he sports eye-catching Gram Parsons-inspired Nudie suits and rodeo gear like a classic country singer, it's Orville Peck's signature mask that stands out. The musician says the accessory is influenced by an amalgamation of things: the idea of the "masked cowboy," a bandit and an outlaw. It also stems from his memory. "There's a photo of me when I was a little kid, and I had a cowboy hat on [with] a handkerchief covering my face because that's just what I thought a cowboy did," he recalls. "I was always obsessed with the imagery of cowboys and the idea that they're this antihero. I grew up without very many friends, so I feel like I'm kind of innately like a lone soul."

Aside from anecdotes like these, he's vague about his upbringing, only sharing that he grew up in a desert somewhere outside of North America and was raised by two creative parents: a mother who taught him how to sew and a father who was a touring sound engineer with glam-rock bands like Suzi Quatro and The Sweet. Before making country music, Peck got his start playing in a variety of punk bands; he's been working full-time as a musician since he was in his teens.

In March, Peck, who is currently based in Toronto, released his debut album, Pony, via Sub Pop. Partly recorded in a cabin on Gabriola Island in British Columbia, this collection of shoegaze-tinged melodies paired with classic American-country vocals captures Peck's admiration of country greats like Dolly Parton and Johnny Cash, with a hint of '80s glam and grunge.

Despite his masked attire, Peck's more candid in other areas of his life. Openly gay, his latest record touches more deeply on his personal life than projects past. "I think this album is really a chance for me to expose and talk about things that I've never really talked or made art about," he says.

With that, there's a visible throughline of melancholy that weaves together the album's singles. "Dead of Night" details an agonizing kind of love that comes in a "take what you can get" form, and "Big Sky" muses on his past relationships and internal heartbreak. On "Turn to Hate," Peck grapples with the idea of freedom and how it can make you lonely as he tries to avoid his own resentment becoming hate.

Alongside his music, Peck is also aware of his potential impact as a queer country musician, especially in terms of representation. "I think some of the most touching and validating things I hear about my songs or me as an artist are the messages I receive: It's young, gay or even old, gay men or queer people... honestly, a lot of people who just feel ostracized from society," he says. "That's really lovely because I grew up feeling pretty similar, loving so many types of music and not really seeing myself represented in it."

The timing of Peck's career couldn't be better. With country music being embraced by wider audiences thanks to the success of artists like Kacey Musgraves, Maren Morris and, most recently, the viral popularity of Lil Nas X, Peck feels right at home. "I fucking think it's so cool that Cardi B is wearing fringe gloves, cowboy hats and chaps, and I think Lil Nas' 'Old Town Road' is super," Peck says. "I think everyone should be more 'Yeehaw.'"