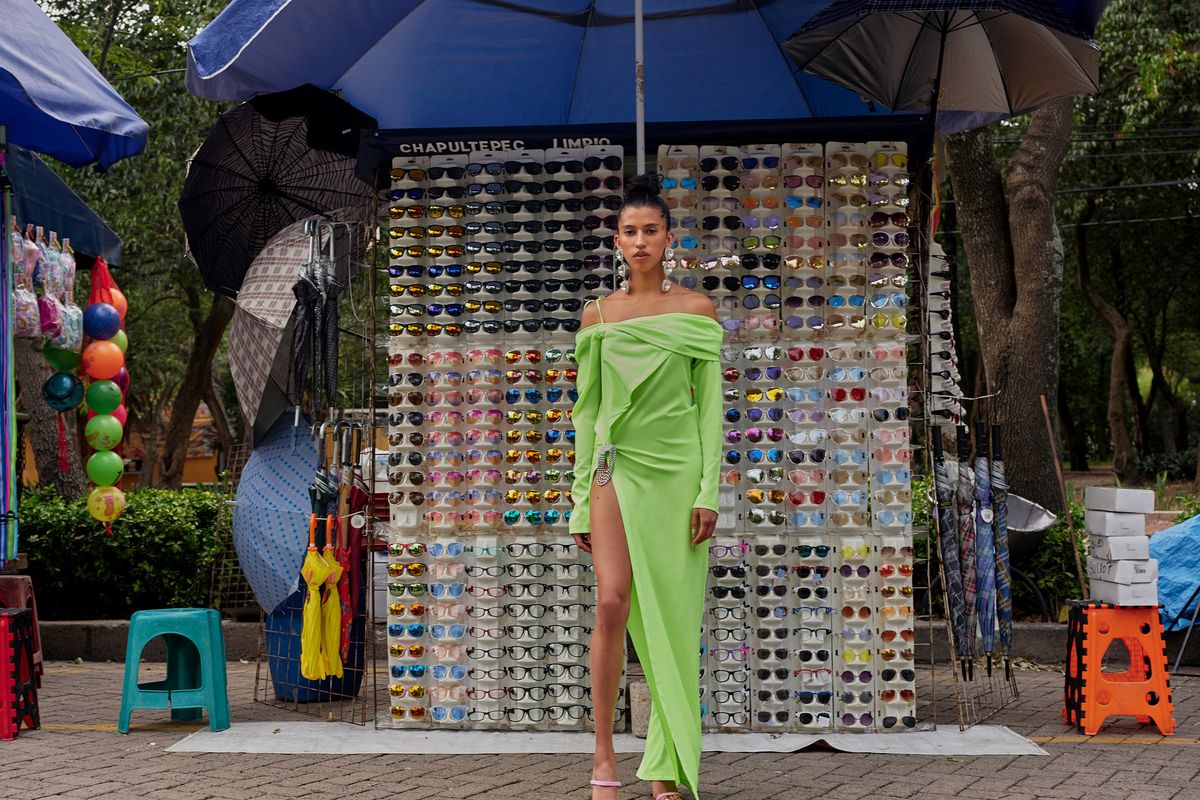 Opening Ceremony is back in the Olympic spirit! Founders Carol Lim and Humberto Leon have returned to their original "country of focus" retail concept, with their IRL and online stores spotlighting the fashion and culture of a new location each year. "We both love to travel, and founded Opening Ceremony after we were inspired by a trip to Hong Kong," Lim tells PAPER. "That spirit of exploration is something that motivates us and keeps us excited."

The destination for 2019-20 was an easy choice: Mexico. That place your friends are always filming their sun-drenched Instagram stories from, and the center of immigration debate in Trump's America. "Carol and I both grew up in California, so Mexico has always been a neighbor to us," Leon adds. "Throughout the years we have loved traveling there and have always been fascinated by the culture, food, art and design. With all that is being said in the current political landscape, it seemed like the perfect time for us to focus on Mexico… Sharing a platform for young Mexican creatives feels like the perfect way for us to do it authentically."

There are no half measures at Opening Ceremony; visit the Howard Street flagship and find it transformed into a Mexican market stall with a downtown Manhattan twist. Alongside established OC favorites like Barragan and Tuza, you'll find younger brands, many of them having never stocked in the US before. Plus ceramics, shopping bags, and other handicrafts sourced from Guadalajara and Mexico City.

Get to know eight young creatives participating in Opening Ceremony's Year of Mexico, below.

My partner and I started out as costume designers designing for different ballet companies, and we slowly transitioned to fashion. It's something we've always been interested in — ballet, we did it because we wanted to pay the bills. There's a focus on quality with our clothes. Making sure that quality is something we always look at. Because in a world like ours when something gets a snag or starts to feel old, it's very easy to dispose of clothes. We want our clients to be so happy with our clothes that they become heirloom items that they keep always. They're investments. We live in a time of disposability, so we're trying to make sure that doesn't happen with what we do. We use French seams always, we want the finish to always be beautiful. Because we value what we do, but we also value the worth of our customers.

I'm a fourth generation jeweler; I studied visual arts and then got into jewelry. I never thought I'd be a jeweler because I was trying to do the opposite to my family. But then I found my voice. In Mexico I searched and didn't find any gender neutral jewelry, no cool jewelry for men with mixed materials. I really like to mix materials. My pieces are simple, but they have a presence, and they work for any gender. My design, I think, just enhances the body in a way. Jewelry becomes part of your soul, so that's interesting. Jewelry becomes part of your story. That's what I'm trying to achieve. It's not fashion jewelry; it's something you take care of, you treasure, that you pass on. Even simple jewelry, it's about the moment you bought it, the moment they gave it to you, it's something really symbolic. Through that symbolism, that's how I find my own existence. Through making people's time worth something.

We make pieces that are inspired by the San Marcos blankets. The San Marcos was a brand of blankets based out of Aguascalientes, Mexico. The man who came up with that blanket took a trip to Spain and saw that they were making their own blankets and was inspired to create a blanket that he felt would resonate with Mexican people, where he was from. So he went back and he created these amazing blankets that usually have tigers and religious iconography and just a variety of images that he felt would resonate with the people. They were a hit, and people would use them during the wintertime, and they became like heirlooms, like these pieces that you hold onto forever. Like you gift them to each other during Christmastime, your mom sends you off to college with it, it's a really loving, loving piece. I've never met anyone that has ever disposed of a cobija ever in my life. When I came up with the idea to use the blankets I was questioning: why am I necessary in this industry? Like, what do I have to contribute? And I felt like there was a void in all of the things that I considered beautiful, and they weren't being manifested visually. And I was like, wow, I have this box of beautiful things and treasures that I can create beautiful things out of.

I'm the brand manager for Dan Cassab here in New York City. It's a brand that was founded in 2016 by Daniella Cassab, a stylist at the time. She by chance met J. Balvin, the reggaeton singer. He fell in love with one of her pieces, and after that the whole brand took off. And she realized this is her passion, what she wanted to do. She's worked closely with many small artisans and tanneries in Mexico, the idea was to have communication between artisans and designers. I think often what ends up is you end up directly copying artisans, it's a huge issue, people copying it and calling it their own brand or asking artisans to do something that is completely foreign to them. So the idea for us to really have real conversations.

We use a balance between artisan techniques and modern design. Like we make cups, but for drinking Mezcal. It's a new concept for a new generation! There are a lot of people doing ceramics in Mexico City right now, so it's a nice exchange of knowledge. It's interesting because Mexico has a lot of ceramics exchange; we make our version of Chinese pottery. Mexico has a strong ceramic identity: mostly hand painted, and sometimes hand built. Some people use fancy electronic pottery machines, some use something with a washing machine motor that they made themselves. We've been working with some artisans who use more interesting raw techniques like wood firing, bringing out the tradition that's there.

There are three of us who founded Hi-Bye, and each one of us has a brand, that we stock in our Mexico City store: Roberto Sanchez, WURST, and Worldwide Limited. We've all been friends since we were teenagers, and it's the first time our clothes have been available in the US, so it's very exciting. We used to intern here at Opening Ceremony, too, so it's really nice for us. Something that's really important is to be able to use our friends and especially the shop to express a different version of Mexico that's not necessarily the visual stereotype. We think there's a lot of stereotypes that are just really untrue. We exist against that.

We met in college, three years back, and we were developing our individual pieces. Then we became friends, started working late nights together. We found we were interested in the same issues around fashion, and in fact we realized we are exactly the same in our design ethos — it was fate, actually, because Hugo failed one semester so got held back a year. We like very clean lines and up until now we've been very purist with the color palette, only using black and white, black and red. When Opening Ceremony contacted us we were very nervous, to be honest, and spent all night cleaning up our studio! But we showed them the clothing and it was actually very chill.

It's been four years since I moved to New York, from Mexico City. I think where I grew up in Mexico City it was hard to find something that was really special, but affordable. That's how I started doing clothing. I moved to New York and did a presentation, and it got attention, everything got really good after that. The dream! Opening Ceremony picked me up after my first collection and they've been really supportive since the beginning. If I could describe my label in three words they would be sassy, flashy, and comfortable.