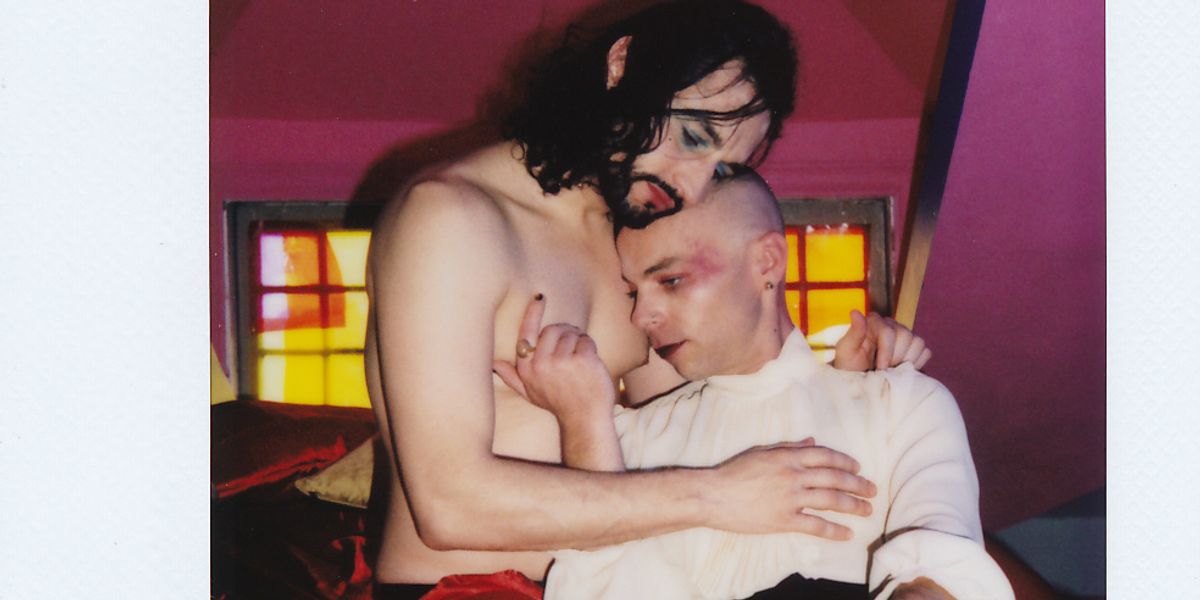 This NSFW Film Is a Tender Look at Queer Loneliness

A recurring theme in the work of filmmaker Tristan Scott-Behrends is the many facets of loneliness common to the human experience.

But as demonstrated in his recent short film Curtain Down — in which comedian Margaret Cho played a funny, but wise mentor figure to his character Storme Du Bois, who struggled with aging — the crisis of feeling alone has a particular resonance with queer people. Loneliness is inherently traumatic, any expert will tell you, but trauma, both the pain of it and the recovery from it, are often the seeds of a fruitful, familial bond to be shared among queer people.

Another strain of this that is constantly a topic of discussion is how the phenomenon of queer loneliness manifests in, or is exacerbated by, the digital age. You can swipe right or left to feel more connected and (also, still, somehow more alone) on your dating or sex app of choice. And with Valentine's Day coming up, we'll all be talking about love as a concept rather than love as an action. In queer circles of constant self-objectification, how can people transform love from fleeting thought to something real and tangible?

Scott-Behrends may have some clues, which you can uncover for yourself in the latest film he has written and directed, Only Trumpets, premiering today with PAPER. In the film, which employs a beautiful wash of colors evoking dark rooms in buddy booths and faded Hollywood glamour, actors Xavier Jimenez March and Daniel Crook play characters who are marginalized by the hierarchical throne of queer desire. A fit, "hot" gay cisgender male sits atop that throne, and the rest of us who aren't that struggle to find connection, whether momentary or long-lasting — or at least, that's the narrative this film works to deconstruct.

The two ultimately see a likeness in each other, as people who are more femme-presenting, and discover a mutual kinship. You see supporting characters scrolling on their phones and becoming archetypes to fit in, sexually and romantically: twink, bear, daddy, jock, the list goes on. Essentially, the film posits that we're all searching for connection, the caveat being that we all have our cycles before meaningful connection can begin. But as Only Trumpets proves, even the most genuine moments of intimacy can be fleeting. Watch the PAPER premiere of Only Trumpets, below, and learn more about the film's themes and their personal significance from director Scott-Behrends.

This film explores an arc of loneliness that starts one way for the leading queer femme character and ends in another. How does loneliness impact you, and in the queer community? What does it leave to chance?

Being alive is a lonely experience. Love isn't the cure, and being in an unfulfilling relationship can be one of the loneliest feelings in the world. That said, queer people are interacting with the world and ourselves through a different experience. I think a lot of this impact is generational. I am 31 years old so while growing up, even in California, even to very open--minded and loving parents, looking around for role models it was very difficult to find healthy representations of older queer people in desirable relationships in real life or in media. Partially because many of the generation I would have been looking up to were either wiped out or traumatized by AIDS. In my earliest sexual development, I had no access to romantic stories about people like me. Any time I saw myself portrayed on screen it was either as a joke — a sexually non-existent effeminate punch line — or a tragic victim of AIDS. There is so much talk around representation around at this moment which really excites me. As I have taken the time to think about it, I am able to see some really clear lines about how the lack of it has directly affected my life, and in turn, the lives of the people I date or sleep with. I am really focused on this idea going forward and am very interested in making work creates representation for what I lacked. I would love to create a magical musical that queer children can see and grow up with the notion that their lives get to be full of magic and love.

"In my earliest sexual development, I had no access to romantic stories about people like me. Anytime I saw myself portrayed on screen, it was either as a joke — a sexually non-existent effeminate punch line — or a tragic victim of AIDS."

Why does it seem as though everyone wants meaningful romantic connection but few people do what it takes to attract it?

There are so many factors. These aren't tools we are given. For queer people of my generation, and certainly those before it and unfortunately, though its getting better, for generations below, there is so much shame, trauma, and misogyny that we are all working through in our own ways. Even when we get good with ourselves, the people we love may still be dealing with those things in their owns ways. Then there is the component of technology — it becomes very easy to deny oneself love when sexual needs and desires can be met quickly with a few swipes on a phone. Dating apps have changed our culture. People are less likely to talk to a stranger at a bar or flirt at the check-out line in the grocery store. We pass that time alone in public looking into our devices to avoid vulnerability, comparing our lives to our friends on Instagram, and swiping the faces looking for someone to go on a date with. I think that the technology can be helpful to some, I have met lovely people that way, but ultimately it just becomes about how someone looks in a photograph. That doesn't interest me at all. We need to put ourselves in positions where we can exchange energy and pheromones with others, see how potential partners carry themselves and interact with the world around them. That is what is sexy.

How do you personally identify with the main character, their love interest, and the performative queer archetypes of sexual attraction and desire you show?

As with all of my work, in some way, this piece comes from experiences that I am working through. I like to use my work to kind of lay out a frustration or personal observation. Through the creation process, I talk to others and learn that I am not alone. I suppose it would probably be more time and cost-effective to just speak to a therapist, but I think films are prettier.

In terms of the performative question, there is a lot to unpack. I will particularly speak to this in terms of gay cis male sex, as that is primarily my experience. This hyper-masculine, Tom of Finland, has become the sexual ideal. It has never made me comfortable. It felt like here we get given this gift of getting to be unicorns in the world, but instead lean even further into these patriarchal ideas of what it means to be male. Giving ourselves boxes to put ourselves and each other in, most of those boxes in some way are a mirror to the porn that exists for gay men, which is full of problematic stereotypes and flat-out racism. I am mostly attracted to other men who are able to just exist in themselves as themselves. But of course when that time comes, I know if I am looking to just get laid, I better leave my fake eyelashes at home and throw on a baseball cap.

Do you believe in romantic happy endings for queer people?

At the end of the day I am a romantic, but I believe that for all people, queer, or not, the Disney-fied fairytale ideas of romance and happy endings should not be what any of us are after. But I think that we should always strive to seek out those moments where we experience magic with ourselves or with others. Sure, I could probably be in a relationship if what I really wanted in life was that, but it's not. I want sparks and stimulation, not that it needs to be that way all the time, but I am happier to have those shorter-lived moments with magical people that may have to be fleeting than to be stuck bored to tears in a relationship that was practical. Ideally there is something somewhere in between. In the meantime I have made a dedication to love myself in the ways that I would love a partner, and if I can succeed at that, then whenever my ending will be shall be a happy one.