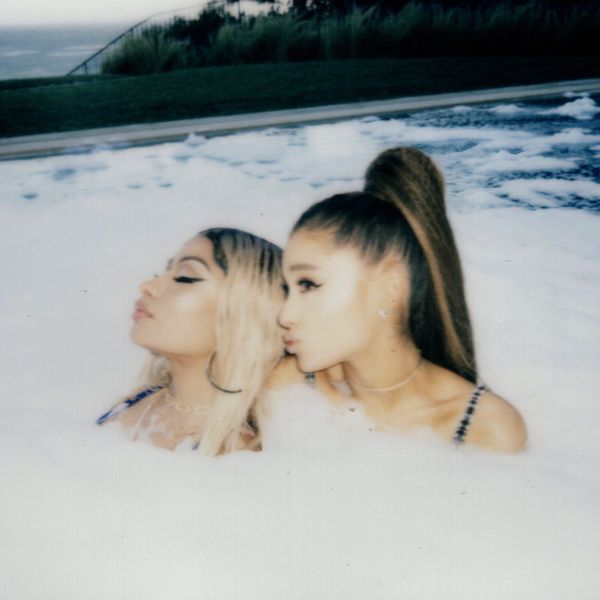 It's only been two days since Nicki Minaj dropped her single "Bed (ft. Ariana Grande)," and it has already hit number one on the iTunes Worldwide Song Chart. To celebrate this, Nicki's taken to Instagram to post unretouched sneak previews for her upcoming music video with Ari, and a never-before-seen bikini photo.

Barbie® on Instagram: “You know the love is real when u send ARIANA fkng GRANDE an UNRETOUCHED #Bed snippet & she gives you the green 💡to post it. Ugh!!!!!…”

The video preview was posted on Thursday, following the song's online release, and after it topped the charts in fifteen different countries. The MV is giving off some serious summer vibes, with the sun, sand, and the two artists clad in bikinis and chilling in a bubble-filled pool.

Once "Bed" hit number one in 24 countries including the US, Nicki posted a sultry, never-before-seen photo of her sporting a blonde bob, sun visor, and the stylishly strappy high-waisted swimmie. "#BED is now #1 in 24 countries including the US. Not on the RAP chart. On ALL GENRES," captioned the rapper. "Thank you so much. Idk what else to say. 😥🤭 #Queen is the #1 PRE-ORDER Album. Thank you to my sister Ari & to all of you in every single one of these countries around the world. #RichSex still in the top 10. My sister Ari has 3 songs in the top 10. Blessings."

Nicki Minaj drops her new album Queen on August 10, 2018. The tracklist will include "Bed," along with her singles "Chun-Li" and "Barbie Tingz." She revealed the album cover to her Insta on June 7th, with the photo taken by Mert Alas and Marcus Piggott. She calls this her "greatest work to date," and we all definitely can't wait to hear more.