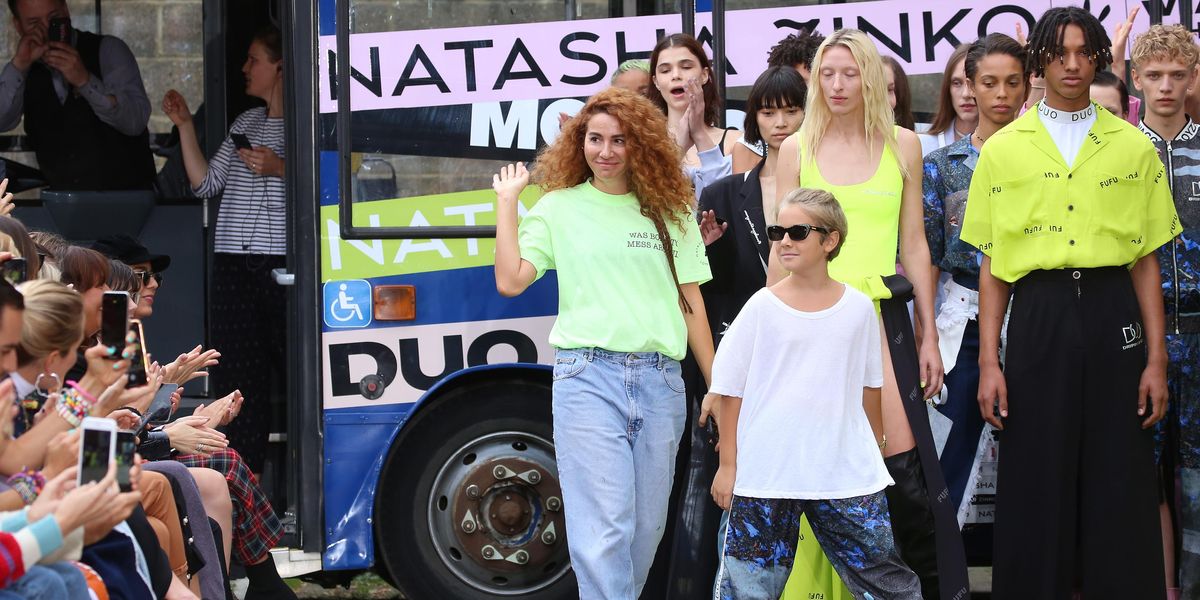 Lasting a decade in fashion is no easy feat for most designers, let alone for someone who's remained steadfastly independent throughout their career as Natasha Zinko has. Thanks to a savvy mix of pop-cultural cachet, underground appeal and the occasional viral fashion moment, Zinko has been able grow at a gradual but healthy pace during a time many of her indie peers were forced to pulled the plug.

Related | Cardi B Matches Her Hair to Her Birkin

It's that latter ingredient of success that has helped Zinko amass a cult following for so many years, partly fueled by some of the world's biggest stars. Most recently there was Cardi B, whose patchwork bandana-style dress sent the Internet buzzing when she matched the paisley prints to her hair. ("We received so many pictures of the people making the same dress at home using their old bandanas," Zinko says.) There was also Jennifer Lopez, of course, who was spotted wearing the designer's "thong pants" on the set of one of her music videos.

To be sure, it wasn't just celebrities that helped boost Zinko's viral factor. You've probably seen her infamous "double jeans" that featured not one but two waistbands that got picked up by every outlet from Mashable to Insider, all of whom claimed that people were "going crazy" and "losing their minds" over them and their $695 price tag (the jeans sold out regardless). Or the bath towel dress she paired with a garter and stockings for her Spring 2020 show.

Part of the allure no doubt lies with the fact that her designs make a powerful fashion statement on social media. Between the deconstructed silhouettes, collage of prints and textures and the mish-mash of references, it's no surprise that her work has struck a chord with the Instagram crowd. It's also why famous names caught on to her label so early on, the beginnings of which started in earnest around four years ago when Hailey Bieber showed up wearing her clothes head to toe during New York Fashion Week.

"We couldn't figure out how it happened," said the brand's president John Murphy. "She was wearing this padded check, denim jacket with a short skirt and we're like how? We finally figured out that she bought it at Kirna Zabete." The same thing happened with Miley Cyrus, who wore their faux fur pink coat out of the blue last December. "I called our PR and asked 'Did you loan this?' and they said no," Murphy adds. "So I found out that she bought it at Satine. [Many times] we don't know about this until it pops up on social media." (The thong pant J.Lo wore was also a purchase, this time from Maxfield in LA, one of Zinko's earliest retail supporters)

Indeed, the list of VIP clients reads like the who's who of the entertainment world: Dua Lipa, Rita Ora, Travis Scott and Lady Gaga have all donned Zinko's eclectic wares. And the success of one of the designer's best-selling items — the Slide — can be traced back to early last summer, when Bieber posted photos on Instagram casually wearing the signature furry sandals. (She's also a big fan of Zinko's baggy light wash jeans, which she's worn on numerous occasions.)

But to attribute Zinko's success solely to celebrities would be a disservice. With her fiery red curly hair, impeccable street style and charming persona, she's long been adored by fashion novices and the industry establishment alike. Since her first ready-to-wear outing in 2015 after starting out in jewelry and subsequent participation at London Fashion Week (Browns was the first UK store to carry her designs), she has always incorporated storytelling through her collections, oftentimes referencing her Ukranian heritage.

For instance, last year marked the culmination of a trilogy of shows that touched on themes of sobriety, guilt and superstitions. She describes her aesthetic as always changing according to her various moods, finding inspiration anywhere and everywhere. But for longtime fans of her work, the NZ signatures — patchwork, bandana prints, smiley faces, slouchy denim — never go out of style.

Sustainability, one of the core tenets of the brand, comes naturally to her as a girl from the Soviet Union, where resources were hard to come by and being frugal was paramount. "In my country that time, everybody did not have a lot of money and we were saving everything, like we would never throw a box away because maybe we would need it tomorrow to put something in it," she says. "Last year we didn't buy fabric, we were just using the ones we had in the workshop. I think it's important to use what you already have."

Travis Scott at an NFL game in Houston wearing a Natasha Zinko shirt. (Photo via Getty)

As it was for everyone else in the industry, Zinko faced her share of difficult challenges last year when the pandemic hit. But beyond bringing her sustainability methods into focus, she was also one of the designers who pivoted to making face masks early on, and her last collection was shown via video which was received well by retail buyers and fans alike.

These days, Zinko is focused on growing the working relationship with her 13-year-old son Ivan, a street style star in his own right. The two started the menswear business a few years ago as a capsule, called DUOltd, which has taken off ever since and is now a sizable operation that he will eventually oversee entirely. She also recently opened a vegan and gluten-free cafe in her London store.

"Ever since I started making clothes I've always wanted to see people wear my stuff," she says. "Now I can see them with my matcha latte and that makes me really happy."