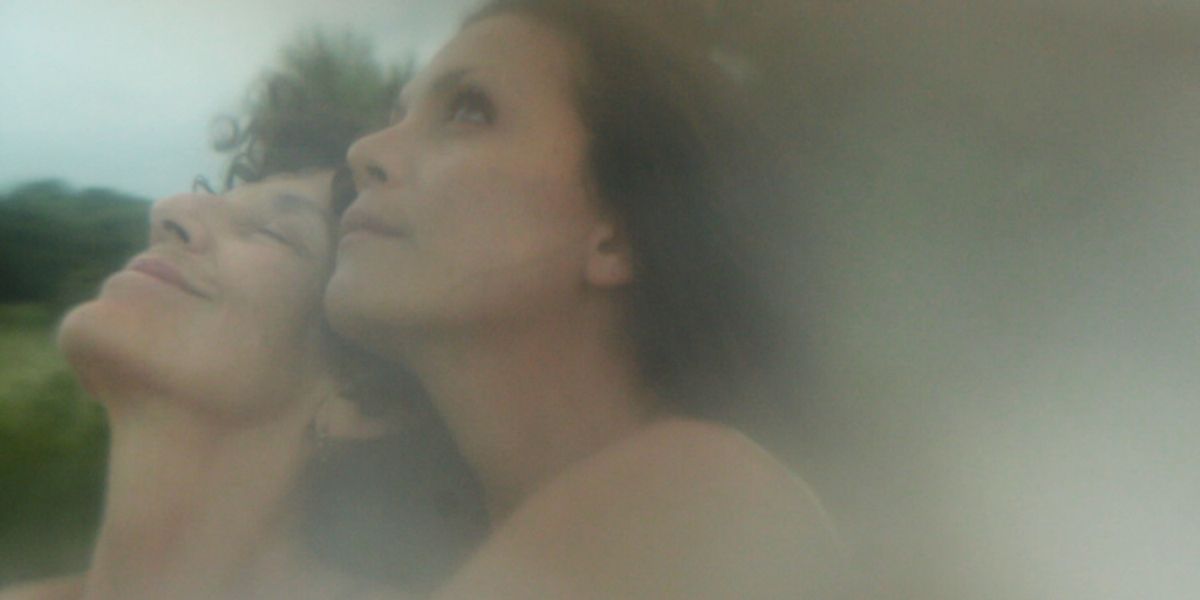 Would You Take Mushrooms With Your Mom? Meet One Woman Who Did and Made a Movie About It

As a writer, you can't not click on an email with a subject line reading "Would You Take Mushrooms With Your Mom? I did... and I'm making a movie about it." You simply can't not click.

The contents inside weren't what I wasn't expecting at all. 30-year-old Brooklynite Rivka Rivera had the bright idea to take her mother, 70-year-old Amy Berkman, on a shroom-ingested journey to an old childhood stomping ground on the Jersey Shore after having done so a year prior and filming documentary footage as an experiment. Rivera, an actress and filmmaker, was born with innate curiosity, which in the case of her new movie, Are You OK? Cause I'm OK, bred a desire to act as myth-buster for common misconceptions around the use of psychedelic drugs as conduits for personal catharsis and all manner of spiritual experience.

Somehow, Rivera, along with the film's director of photography Meredith Adelaide, convinced her mom to go again a year later, armed with a storyboard of how things might go. The finished product explores the dichotomy between Rivera and Berkman's trips — Rivera, the decidedly more internal-focused millennial, separated from her normal impulse to self-document, while her freewheeling, tree-hugging, baby boomer mother, tripped in a Bernie Sanders t-shirt and all. What's most affecting and immediate about the film is the unshakeable bond Rivera has with her mother.

PAPER caught up with Rivera to talk more about the making of Are You OK?, psychedelics as truth serum, tripping through Trumpland, and more.

PAPER: What was the significance of the Jersey Shore location for the film? I'm sure it was more meaningful than a literal GTL situation.

Rivera: We've been going to this part of the island since I was four or five. As a single mom, my mom didn't have a vacation home growing up, so she would take us to rent a house there. So much of our relationship has blossomed and developed there. In a Sean Baker sense, the location became the story; it gave us the story we wanted to follow.

For example, the lighthouse is huge in that part of the island, so any home you go into, you'll find a lighthouse picture, or something about the lighthouse. So that becomes prominent in the story without us having to make shit up. In the beginning, we have my mom walking around in this big blue Bernie Sanders T-shirt, and she's walking around eating ice cream; she's the biggest Bernie bro. And the Jersey Shore is, like, Trumpland. And I'm Puerto Rican, so I remember going down there as a kid and feeling that energy. It was my first experience outside of New York where I was like, "Where are all the people of color?" So we tried to showcase moments like those, too. My mom walking around in the Bernie tee with Trump stickers everywhere is the perfect example of this sense of being out of place.

What were some of your mom's biggest reservations about the trip AND the trip to the shore?

She kept saying that she didn't want to go into a death spiral — it was kind of in the script, but she was actually really scared about thinking about the things we don't typically explore mentally on a daily basis. And it's a mother-daughter thing. She just turned 70, I'm 30, so she was nervous about the death stuff. We talked about it quite a bit leading up to the trip. But of course when we were actually tripping, her fears dissipated, while all the stuff I wasn't dealing with rose to the surface, even though I kept saying "It's gonna be fine, it's gonna be fine!" She also had to get her heart looked at, so she was just nervous about the medical stuff, and when we went back to shoot the film, we portrayed that in the scenes of her on the phone with the doctor and those fears. But I think I lot of it was her not wanting to spiral into a dark place.

I know you're an actress; is your mom an actress, too? For the purposes of this movie, you're playing yourselves, but was there an element of "getting into character?"

I was really nervous about it, yes. Because it's one thing for us to be on mushrooms doing it, and quite another to go back and essentially recreate it. So we had a year in between where we'd rent out a studio space on 14th Street — a white room — and she has history as a dancer and painter, so there's an artist's sensibility. We'd do writing and dance improv together and it got us used to working together in a way beyond just living in the same house. And then when we went to shoot the project, we had our DP who is just as artistic and integral to the process, so it was three women collaborating. My mom blew me away with her ability to go there. I had her do a conversation with her doctor on the phone in one scene — it blew me away how natural and connected she was to the moment. I was like, "Wow, OK, Meryl Streep."

That's amazing — how did your age differences come up? It's interesting that the movie explores this relationship to psychedelics from the perspectives of your 70-year-old mom and 30-year-old you.

It was so funny — I wasn't sure if it was the millennial thing of me just wanting to show everything, but we do grow up like, "Here's my breakfast, here's my lunch, here's my hat, here's my boobs." She's me and I'm her, but she's from another time and I have to check to see if she's okay with showing something, then I am too. When we recreated it, we were able to see the parts of ourselves that were vulnerable and also what was real, and we could exaggerate those. It was an interesting way for us to test our boundaries. We had a fight, but not a real one, and I was telling her to be present. And she said something to me like, "Your art is more important than your compassion." But we were tripping by then.

Why did you feel the need to script this? Do you feel it might add a layer of artifice, like what you'd find on a scripted reality show?

It's the closest word to use to explain storyboarding. We improvised so much, but there was an ideal arc we had in mind. Because think about watching someone tripping, totally unsupervised, as it were. So that approach needless to say served what we were going for. In the editing of the movie, it's interesting to see how interior moments we are having get shown on the exterior — like really narrowing down the exact rhythms of our respective trips. I didn't want this to just be a documentary as much I wanted it to be a self-investigation; to be able to look back and say, "Why did I want to do this, and what does this reveal about me, and what's the most embarrassing, painful part?" That's about this attachment to the camera — another distinctly millennial experience.

What were the most distinct differences in your trips?

Psychologically, she would leave and was having this amazing trip — it was external for her. And I was having a much more internal, solitary experience. In the script, she leaves and we go around the island which is the beautiful place with a lighthouse and all this history, and I stay inside. So my trip is really with the camera, and the final scene is kind of me looking in the mirror with a camera, and being like, "What is this millennial attachment to this thing?" My mom was really free from that in the way that maybe I wasn't. Cameras in a way were my death spiral — it was an emotional coping mechanism.

What do you mean by that?

Just that us as millennials are maybe so consumed with our images and also the images of what's around us that instead of sitting and enjoying the beauty, which there is so much of. It's like I can't enjoy a beautiful sunset without getting this anxiety around needing to capture it somehow.

People often call psychedelics or any mind or mood-altering substance "truth serum." What were some big truths that came out for you?

I think the biggest one came out at the start. I took way more shrooms they she did. I think it was because I was trying to protect her? We had a postcard of not knowing how to do the moment when the trip started. We were laughing on the beach and I'm leaving my body and we have this great footage of that. Then we come back to the house and suddenly I panic, thinking, "You have just taken mushrooms with your mother, this could go terribly wrong."

I was trying to be strong for my mom, but wasn't opening up, and felt totally in my head. Then I go and throw up in the bathroom, and I remember hearing this voice that was like, "It's okay to still need your mother." At 30, you're kind of feeling like you shouldn't need your mom. I find my mom and she's molesting this plant — she was really into touching plants. We went into this room and I was butt naked, and didn't know how to do anything. It was kind of like going back to infancy. She had these crystals, she's a healer. I was a C-section baby, so I didn't have the canal birthing experience, but when she started healing me with her crystals, guiding me to feeling better, it was kind of like I got to have that experience for the first time.

Is the timing of this movie's arrival around Mother's Day intentional? That happens on May 13.

I know! Maybe, I think there's some awareness of that? But maybe it's just more my impatience and wanting to get this out as soon as possible, and the timing happened to be just so. But more than that, I think this is in a way me wanting to honor all mothers — like the maternal energy. I think everyone is a mother to someone in some way. We are trying to be conscious of that. On Mother's Day, I think of all the women in my life who claim that space, beyond just my mother. Although, my mother, of course, can never be replaced, and you'll see in the movie, that I am her, and she is me.

Rivera is currently crowdsourcing this project on Seed & Spark, with the hopes of raising $10,000 over the next month to help offset production costs. Find out how you can support this project here.