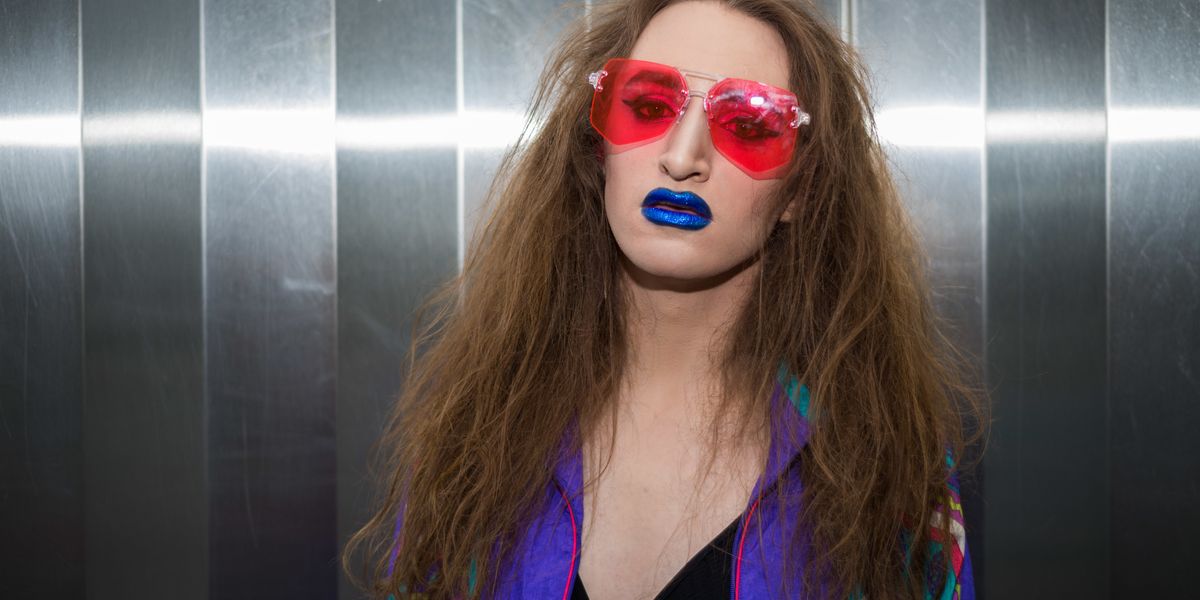 We've all (maybe) been there: you become obsessed with the guy who is unavailable, the guy who leaves, the guy who leaves your texts on read. You write him and say something like, "Hey, hope all is well" with an upside-down smiley face after not hearing from him for days, even though he's done this before. Instead of blocking and cutting your losses, the sad song and dance continues. OK, well, maybe that's my experience, but I know I'm not alone.

Enter Seattle artist Michete, a trans woman performer who makes unapologetically silly but smart underground pop, and also understands what it means, for better or worse to be a "stupid girl."

She released the slumber party-themed video for "Stupid Girl" today, from their latest Cool Tricks mixtape series. It's a wickedly fun foray into the psyche of stupid girls everywhere, both lacerating and humanizing. The song, a catchy affair with unabashedly budget-friendly synth-pop production features a shouty singalong chorus: "I'm a stupid girl/ I am a dumb bitch!" while the verses highlight the offenses.

But Michete has a solution: " When you realize that life has so much to offer outside of romance and that you can be a complete, valid, and fulfilled person without a romantic partner, I think it gets a lot easier to stop being such a dumb bitch," they tell PAPER. Word.

Check out the video, below, and read on for a conversation with Michete about the video's themes and concepts.

Where did the song's inspiration come from?

Michete: It's inspired by situations I've been in and ways I've felt while dealing with men. It's been a long time since I've liked a guy or been romantically involved with anybody, so I can look back on previous situations and be really cognizant of how ridiculous I was being. Like, I was really going through all this pain and emotional strife because of some guy, because I needed his validation so badly. I think a lot of women (and gay men) will relate to the song, cause it's a situation we've all been in. Musically, the song is heavily influenced by Kelis, Gwen Stefani, and Lana Del Rey.

The lyrics to "Stupid Girl" are relatable and so real, but how do stupid girls stop being so stupid?

Honestly, for me, it's all about finding reasons to love yourself and to be excited about life that don't revolve around men or romance. For me, it's my music, my drag, partying, drugs, my friends who I love, simple pleasures like video games or whatever. When you realize that life has so much to offer outside of romance and that you can be a complete, valid, and fulfilled person without a romantic partner, I think it gets a lot easier to stop being such a dumb bitch. But let me be clear: I'm definitely still a dumb bitch in other ways, I just don't get caught up with men anymore.

"When you realize that life has so much to offer outside of romance [...] I think it gets a lot easier to stop being such a dumb bitch."

The concept for the video seems like a queer punk sleepover. What inspired that idea?

I wanted to make something really fun and colorful that fit the theme of the song and showcased my personal taste. A slumber party party video almost felt obvious. It was one of the most fun video shoots I've ever done. Plus, I love any opportunity to show off my acting skills.

I read an op-ed once about the presence of queer rap as something that gets away with infiltrating rap music with highbrow sensibilities. But I think that limits the genre's diversity, and is rooted in classist rhetoric. Where do you feel you fall within that? Do you identify with it at all?

I don't think I'd agree with that sentiment at all. I definitely don't consider what I do to be high-brow. My music is stupid as hell, it's meant to be fun. I want people to listen to my music and be entertained and laugh and dance and feel free.