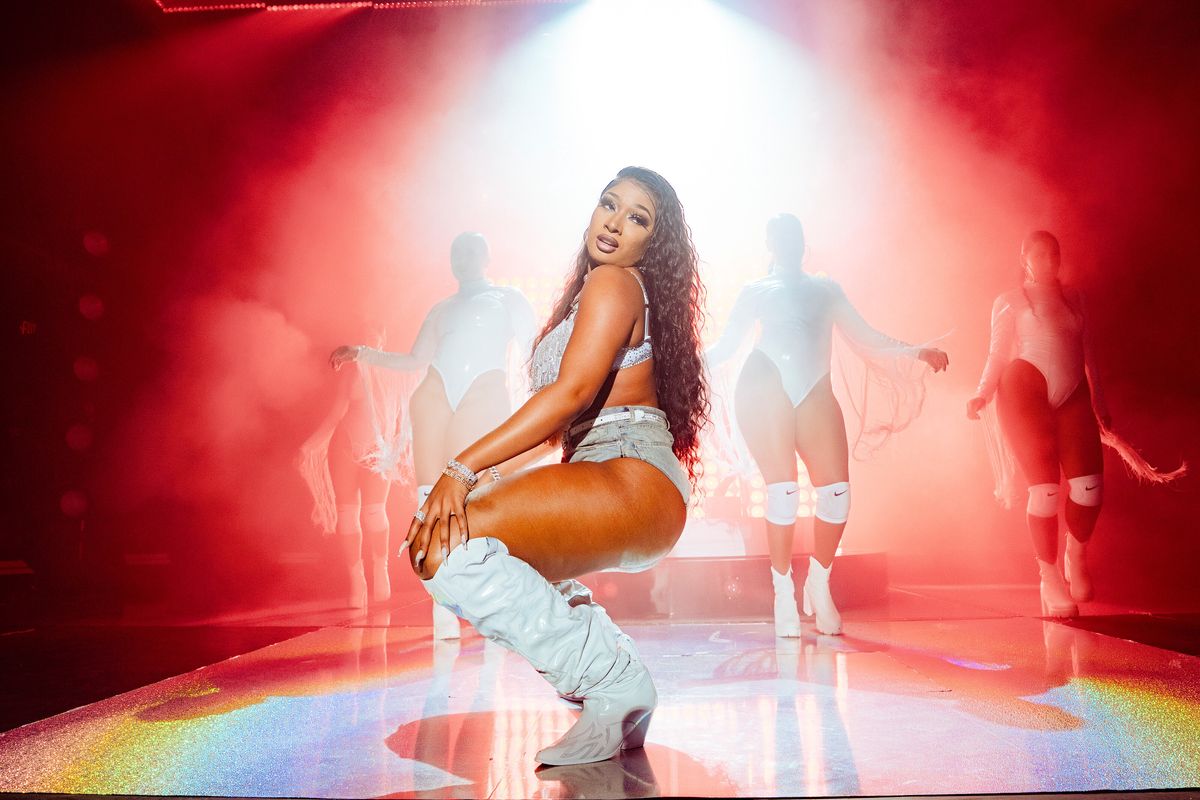 On December 3rd, at White Oak Music Hall, I attended Megan Thee Stallion's last performance of 2019. Her Red Bull "Thee Outlaw" show was her homecoming in a sense — a triumphant return for Houston's sweetheart, a young Black woman from Texas who brought the "motherfuckin Souf" to hundreds of festivals and venues throughout the United States over the past year. Kandy red hot slabs with sinister neon lights that glowed from their underbellies welcomed me as I arrived, alongside a "THIS WHY YA HOE MI55IN" sign bordered by white styrofoam cups of lean — the city's unofficial drink.

It was an audiovisual reminder of the experience to come. Slab cars are physical embodiments of Houston's rap culture — of Megan Thee Stallion's origins and the city she calls home. Most importantly, they're owned by CornBread aka Kandy Red Bread and Paul Wall , an early pioneer of Houston's contemporary rap presence in mainstream hip-hop and Swishahouse fame.

Houston loves Megan Thee Stallion. It was clear, when Texas Southern University's drumline performed an HBCU interpretation of "Big Ole Freak", that their presence was to honor an ex-student who's proud of her alma mater. As Slim Thug and Paul Wall, two of the city's living legends, opened her homecoming performance with a DJ set that paid homage to Houston's forefathers like Lil Troy and Lil Keke, attendees chunked up the Deuce in respect to the North and South side. As a Texan native who resides out of state, there's few experiences where I've felt at home, but in that music hall there was a resounding spirit of homecoming — a familiar aura as attendees encouraged each other to throw ass, reciting every word of Megan Thee Stallion's discography, from her early mixtapes at 1501 Entertainment to the universally acclaimed Fever.

The show felt like a thank you from Megan Thee Stallion to Houston — the city that supported her mom Holly Thomas' rapping career, and prayed over her after Thomas died. The city that provided an only child with sisters in the music industry like Beyonce, Solange and Normani. The city that inspired Homecoming, Beyoncé's Emmy-nominated documentary of her historical Coachella performance that transported audiences across the globe to an HBCU in the Dirty Dirty South. Megan Thee Stallion is Houston, and Houston is Megan Thee Stallion. She's earned her role as the city's ambassador from her early YouTube freestyles, especially the Dallas versus Houston, where she exterminated my hometown outside of our beloved Reunion Tower.

At a young age, Holly Thomas AKA Holly-Wood brought Megan Thee Stallion to studio sessions, where she was exposed to Biggie and Pimp C as her mother executed bars in the background. From 2001 - 2007, Holly-Wood achieved city-wide success through a tribute single to Houston legend DJ Screw that garnered heavy rotation on 97.9 The Box, a local hip-hop station. Her mother's love for hip-hop inspired Megan Pete's transformation into Megan Thee Stallion, and they found love in the exchange of verse, structures, and feedback on how to strengthen Megan Thee Stallion's natural rapping abilities. We've witnessed the lineage of male rappers and their offspring for decades now, but Holly-Wood and Megan Thee Stallion reminded lovers of hip-hop about the genre's maternal line.

In the crowd at the Houston show were Southern rap elders Bun B and Devin The Dude, looking down in admiration as they saw Megan Thee Stallion flawlessly execute a headline set with active crowd participation, choreography, and stage design. As I looked at Bun B, I wondered what Megan Thee Stallion means to him. What she means to Texas hip-hop as a whole. As a demi-god in Southern Rap, B's early career was characterized by the lack of respect afforded to Southern rappers from those based on the coasts. But Houston has produced generations of rappers who have contributed to the development of hip hop, and through Megan Thee Stallion the city has found another champion — alongside Maxo Kream and Travis Scott, her male counterparts who have achieved mainstream success.

But who had every person across the United States saying "Hot Girl Summer" and "Real Fuckin Hot Girl Shit" all 2019? Meg. At 10 PM central time, saddled on a white horse, draped in white glitter and silver jewels with a matching cowboy hat and boots, welcomed by Ginuwine's "Pony," Megan Thee Stallion made her triumphant return.

Megan Thee Stallion has the gift of turning any person into her trick, from celebrities such as Wiz Khalifa, Moneybagg Yo and Trey Songz to the "hotties" at her homecoming performance. Before she performed her feature on Gucci Mane's Big Booty, she summoned for "five hot girls and one hot boy to show they motherfuckin ass," and they appeared within seconds to twerk alongside her. After they left the stage, Megan Thee Stallion rallied her "hotties" again to continue the "Hot Girl" lifestyle, no matter the season, and transitioned into a performance of her Billboard-charting single with Nicki Minaj. A number of alter egos presented themselves throughout the set, from Hot Girl Coach, HTown Hottie, and Tina Show, before her current form as Hot Girl Meg from Fever. Reminiscent of Nicki Minaj's alter egos from her Pink Friday era, Megan Thee Stallion is a student of contemporary womxn hip-hop, and that's why she's one of the best in the game.

Days after her headlining performance, Billboard Women In Music honored Megan Thee Stallion with a Powerhouse Award. "Everybody really knows that it's women who's running the scenes," she said when accepting the award. "I'm just happy to be apart of it. I can't believe that they let me up in here I'm 24, I'm from Texas and I really like to grind. I really like to work. I'm just getting started. Y'all gon' see where I take it." So far we've seen her bring in the New Year with Beyoncé and Blue Ivy, collaborate with Normani, and show appreciation towards her team by taking them on vacation to Cabo — like the Southern sweetheart Holly raised her to be.

No other rapper right now has the sex appeal, freestyle ability and respect from her rap elders that Megan does. She's known for being authentic to the game without selling out. Her debut album, scheduled to be released this year, could be one of the defining moments of the decade in pop culture and music. No matter the trajectory of her career, just remember her line from "Hot Girl": "Bitch, I'm from Texas, we get rowdy." Houston and the Lone Star State will go to war with any state, or coast, for our champion.