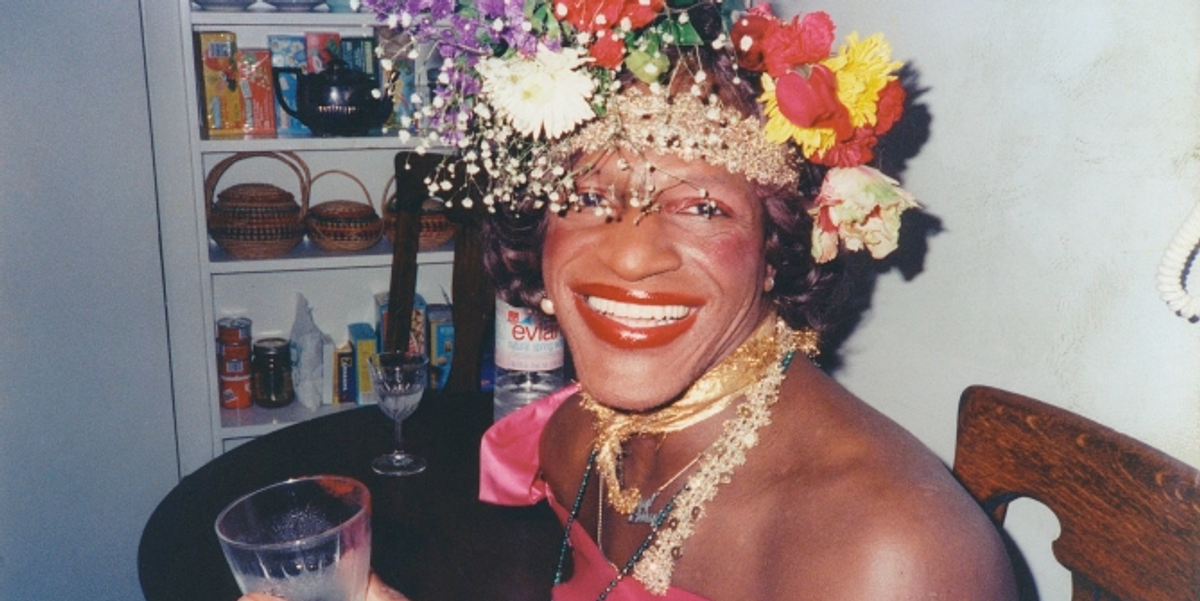 Marsha P. Johnson, trans icon and revolutionary figure in the movement for the liberation of all LGBTQ people, was found dead in the Hudson River on this day twenty-five years ago. Her legacy as the "Rosa Parks" of the LGBTQ rights movement lives on today, and has recently been reexamined in a Netflix-acquired documentary of her life and death.

Raised in New Jersey by a disapproving mother, Johnson moved New York City in the early 1960s to become "the biggest drag queen in the world" and quickly became a fixture in the vibrant queer scene of Greenwich Village. A sex worker and performer, Johnson was a regular at the Stonewall Inn and called herself one of the "Stonewall Girls."

It's been long rumored that Johnson helped start the Stonewall uprising on June 28, 1969, with people claiming to this day that she threw the first brick that shattered the bar's windows. Throughout her life Johnson denied this urban legend, saying that she didn't arrive at the bar until the riot was well underway at 2:00am, but it's a testament to her lasting influence that so many people still believe it.

Today is the anniversary of the #Stonewall Riots of 1969. Today we celebrate trans WOC Marsha P. Johnson, who threw the first brick. pic.twitter.com/IRNWeIQRLy
— SAFQEY (@SAFQEY) June 28, 2017

Johnson joined the Gay Liberation Front in 1970 and later linked up with close friend Sylvia Ramirez, another trans woman of color, to create the Street Transvestite Action Revolutionaries (S.T.A.R.), a gay, gender non-conforming and transgender activist organization. The two also founded S.T.A.R. House, the first shelter for gay and trans youth in 1972, providing food, clothing, housing and advice to the kids who came through their doors. They were a visible presence at liberation marches and pride rallies, fighting for the inclusion of trans people and draq queens in the movement and battling the respectability politics of the emerging gay mainstream.

More than simply an activist, Johnson was a cultural icon. She was photographed by Andy Warhol in 1974 for a series on draq queens, was a member of J. Camicias' performance troupe Hot Peaches, and famously told a judge when asked what the 'P' in her name stood for to "pay it no mind."

Johnson continued her activism into the 1980s as a respected organizer with ACT UP, the AIDS Coalition to Unleash Power. Ten days before her body was found in 1992, Johnson revealed in an interview (seen in the documentary below) that she was HIV positive.

Shortly after the 1992 pride march, Johnson's body was found floating in the Hudson River. Police quickly ruled her death a suicide, and though Johnson had a history of mental illness, her close friends were adamant that she was not suicidal. In 2012, trans activist Mariah Lopez successfully lobbied for the NYPD to reopen Johnson's case and examine it as a possible homicide. As this important Twitter thread points out, the consistently disproportionate rate of violence against black trans women makes Johnson's murder particularly suspect. (As GLAAD notes, 15 transgender women of color have been killed in America in 2017 alone).

A new documentary by filmmaker David France, "The Death and Life of Marsha P. Johnson," examines Johnson's murder and activist Victoria Cruz's efforts to solve it, as part of a larger discussion about the challenges that still face the transgender community. The film premiered at the Tribeca Film Festival and was recently acquired by Netflix.

"Almost single-handedly, Marsha P. Johnson and her best friend Sylvia Rivera touched off a revolution in the way we talk about gender today," France told Variety. "Their names should be household words. But Marsha's life was cut tragically short and Sylvia died shortly thereafter, the victim of a broken heart. Getting to know their story through the investigation undertaken by Victoria Cruz, a seminal activist in her own right, has been one of the great honors of my career."