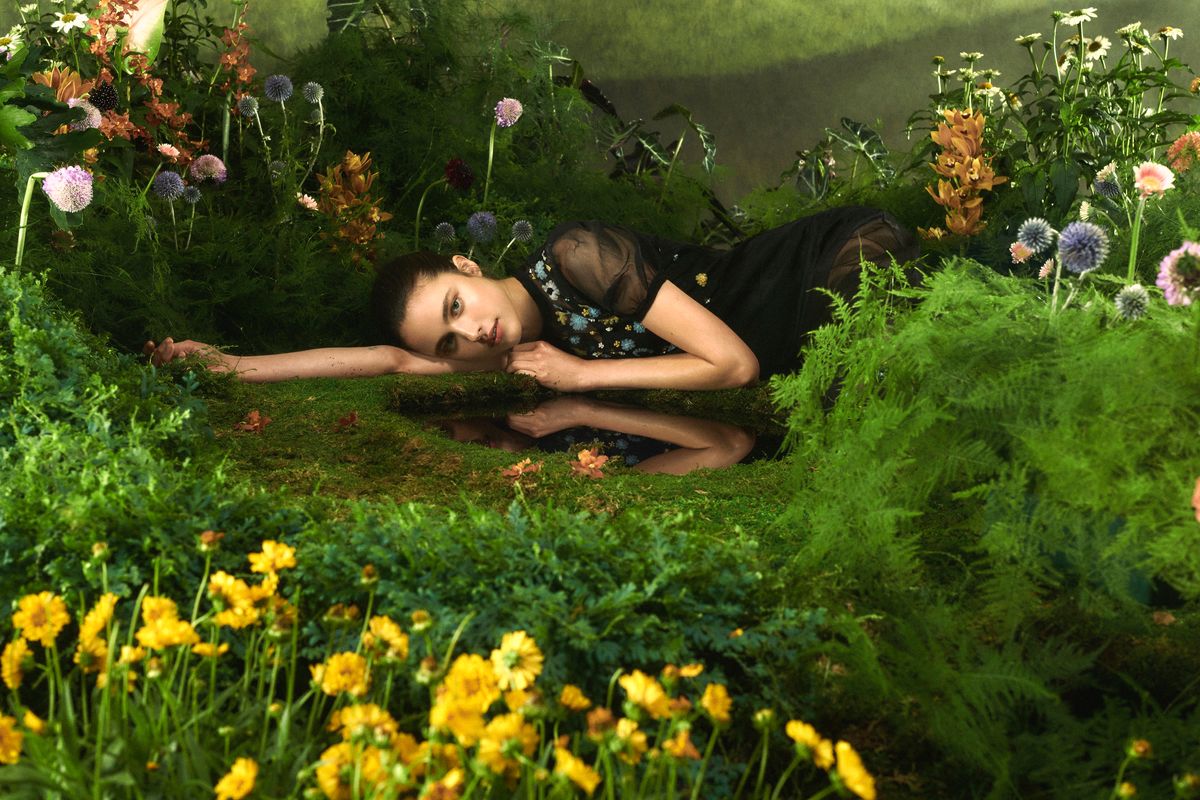 Margaret Qualley suggests we meet under the Washington Square Park arch, and I find her there five minutes early, crouching against the marble. She's busily writing in a notebook, wearing a long black dress with white Converse High Tops, low-key goth among summertime tourists. "This thing makes me seem so much more romantic, huh?" she asks. "But I'm just a poser."

Actually, the diary is more than a prop. "It's basically a means of keeping anxiety at bay. Whatever I'm feeling nervous or anxious about I just put it down on paper, so I can have it there, and hopefully get more quiet in my own mind." The 24-year-old actress is especially fond of the practice before bed, but mid-afternoon works, too. Also, she writes down cool things that happen to her so she can remember them later. She was thoughtful enough to re-read a bunch of entries before our interview, and I'm glad, because there's so much to talk about.

Like the time Quentin Tarantino, her director in this month's rollicking late 1960s mega fantasy Once Upon a Time... in Hollywood, taught her how to smoke on set, using the gourd pipe that Christoph Waltz braggingly puffs from in that scene from Inglourious Basterds. ("You knew it had been a good day of filming when Quentin pulled out his pipe.") Or the time Tarantino stayed up all night developing a new scene for the movie starring her, Lena Dunham, and Brad Pitt, showing up the next day with handwritten lines for the three of them. ("I've kept the script and will frame it.") Or the time she accidentally sat in leading man Leonardo DiCaprio's chair. ("It was chill.") Or the time the film's production closed down the I-10's busiest section so she and Pitt could cruise down it in a vintage car uninterrupted ("Quentin was like, 'You'll never have this experience again.'") Or the time Margot Robbie, who plays a dreamy Sharon Tate, thoughtfully texted her from the first screening at Cannes so she didn't feel too left out. ("It was a really nice message.") Or the time Dunham, well-cast as Manson girl Gypsy, gave her a cranial massage while a hairless kitten watched on ("I found a very dorky entry where I was like, Met Lena today. I think she'll be my friend for life.")

Qualley's just had the best year ever. "So much journaling material," she agrees in the slightest-ever Southern drawl. "I just blow through these things."

There was plenty to reflect on even before she started filming 2019's most anticipated blockbuster. A former ballet dancer, Qualley is the daughter of Andie Macdowell and model Paul Qualley. Her elder brother, Justin, works in real estate. Her sister, "My best friend in the entire world," is the musician Rainey Qualley (Rainsford). She was born in Montana, grew up in North Carolina, and moved to New York City by herself age 16, after retiring the pointe shoes during a bout of self loathing. "I didn't have the proper training when I was really little that would have made me be in the companies that I wanted to be in," she explains. "And I was like, if I'm not going to be the best, then it's not worth it. Which I know is a really messed up thing to say."

To get the conversation about second gen Hollywood kids eating up all the good roles over with, Qualley's level-headed about privilege. "I do sometimes think I don't deserve the life that I have," she says, sincerely. "You know? And obviously dwelling in that undeserving place is not beneficial for anyone. I'd rather help someone else than feel too bad about things. But while I would like to believe that working hard will make it so that I can continue to do this, I'm well-aware doors have been opened for me. I was given opportunities from a very young age that I would not have otherwise had."

With a teenage girl's impulse to rebel against anything endorsed by her mother, Qualley initially suppressed the urge to act. But when a boyfriend took her to a theater class in New York, she heard the call immediately. "I was like, 'Oh, great. I guess I'm going to try really hard to do this, actually, because it turns out I love it,'" she recalls.

Her big break, after just a few months of rabid auditioning, was HBO's The Leftovers, in 2014. Two percent of the world's population had suddenly disappeared without explanation. Justin Theroux played her dad. Being on the show was "like a high pressure acting school," but Qualley definitely got straight A's. She comes across as a manically hard worker, and that jittery stream of energy bounces and clicks on screen: in the underrated Shane Black flick The Nice Guys, Netflix's live action version of Death Note, and this year's provocative Native Son, which premiered at Sundance. She indirectly put her ballet skills to use by going full Christopher Walken in a KENZO fragrance commercial directed by Spike Jonze, and again while depicting Broadway legend Ann Reinking in FX's wonderful biographical miniseries Fosse/Verdon.

Reinking, it so happens, was Qualley's "number one icon as a kid." Now they talk regularly on the phone. Filming the show, opposite Sam Rockwell and Michelle Williams as the titular choreography power couple, was a very specific dream realized. Somehow, quitting ballet has brought her closer to the artform she loves. "I feel, like, pinching myself lucky," she says. "I would never have had that opportunity if I'd strictly just been a dancer."

"I feel, like, pinching myself lucky. I would never have had that opportunity if I'd strictly just been a dancer."

She auditioned for Tarantino around the same period, with no expectations, and didn't hear anything back. So her father, who lives in Panama, suggested they play a trick on fate. "You know how if you interview for a job, the best thing to do is plan a vacation, because you definitely won't be able to take that vacation?" she asks. "My dad told me, book a ticket to Panama, and you'll get a Quentin Tarantino movie." So she got on the plane, and what do you know? Sitting on a remote beach with patchy cell reception, her agent rang to urgently request she fly home and read lines with Brad Pitt. "I was like, 'Nooo,'" she remembers. "'That's crazy!'"

This month will mark the first time Qualley's father actually attends one of her premieres — like many dads before him, he's a huge Tarantino fan. "His favorite scene in movie history is the opening of From Dusk Till Dawn, so I've seen that particular one so many times, I know every single line." She punched in a few during filming, garnering some cred. She does a pretty good imitation of frequent Tarantino collaborator Michael Parks, whose Earl McGraw gets killed off in a fast station around the six minute mark. But not before getting super quotable: "Someone would say they needed a drink, and I'd be like,'I'm gonna get tanked tonight.'"

An abstract re-telling of the Manson murders that focuses less on Tate and Polanski, more on the excellent chemistry of Brad Pitt and Leonardo DiCaprio, Once Upon a Time... in Hollywood is an unusually fresh exercise in nostalgia that's utterly idiosyncratic. Tarantino's somehow-coherent alternative version of LA in the summer of 1969 is packed with cameos, movie nerd references, and a surprising amount of Nazis. Qualley plays fictional Manson family member Pussycat, a Californian hippie girl in a crochet crop top who's gradually revealed as corrupt — summer fruit that's rotting at the core. Alongside a cast of creepy cult members living out on Spahn Ranch that includes Dunham, Dakota Fanning, and Austin Butler, she steals a surprising amount of screentime — and more than holds her own against Pitt, whose performance as cynical smirking stuntman Cliff Booth might just be a career best. "I'm in it more than I thought!" she laughs.

As Pussycat, Qualley has the honor of appearing in a quintessential Tarantino/Richardson scene: the kind taking place in a moving vehicle. What happens between her and Pitt on that shut-down highway forms some of the most memorable footage on the entire reel, which is really saying something, because this thing clocks in at almost three hours. Going mostly by instinct, she plays Pussycat wild-eyed and confident, which is just what's required. She went method to reach the appropriate level of deranged, driving to work every day listening to Charles Manson's strange, psychedelic music in the car, then going to sleep watching documentaries about the cult leader lent to her by Tarantino. They gave her "terrifying nightmares." DVD recommendations aside, though, she says the director was encouraging and empowering and freakishly in tune with his actors.

"There's this one part where I make some weird noise with my mouth," she recalls. "The first take I did not do that, but I had the instinct to do something, I wasn't sure what it was, but I didn't feel comfortable to take up space essentially just because I was so nervous to be there. And Quentin came up to me after the take and was like, 'Hey, did you want to make a noise or something?' And I was like, 'Yeah.' And he said, 'Do it. Listen to yourself.'"

Tarantino foot fetish archivists will also be pleased with his latest tribute to the body part, starring the soles of Qualley, pressed up against the dashboard. "Oh, I'm aware," she says of the trope. "I have dancer's feet, though, so I was like, 'You don't want me to take my shoes off! I have disgusting feet. They've been mangled!' It was the one thing I'm scared about, more than any other body part. I was like, can we have a close up on my elbows instead?'"

A wild ride, to say the least. "If that's my last ever movie," Qualley dryly jokes, "I had some good experiences." But you can expect to see much more of the actress (and her, for the record, perfectly nice) toes very soon. Once Upon a Time... in Hollywood is out July 26, and she's also leading a surefire hit adaptation of Joanna Rakoff's My Salinger Year, which just wrapped in Montreal. "I still feel like I definitely don't know what I'm doing," she continues. "What is life, dude? What is life?"