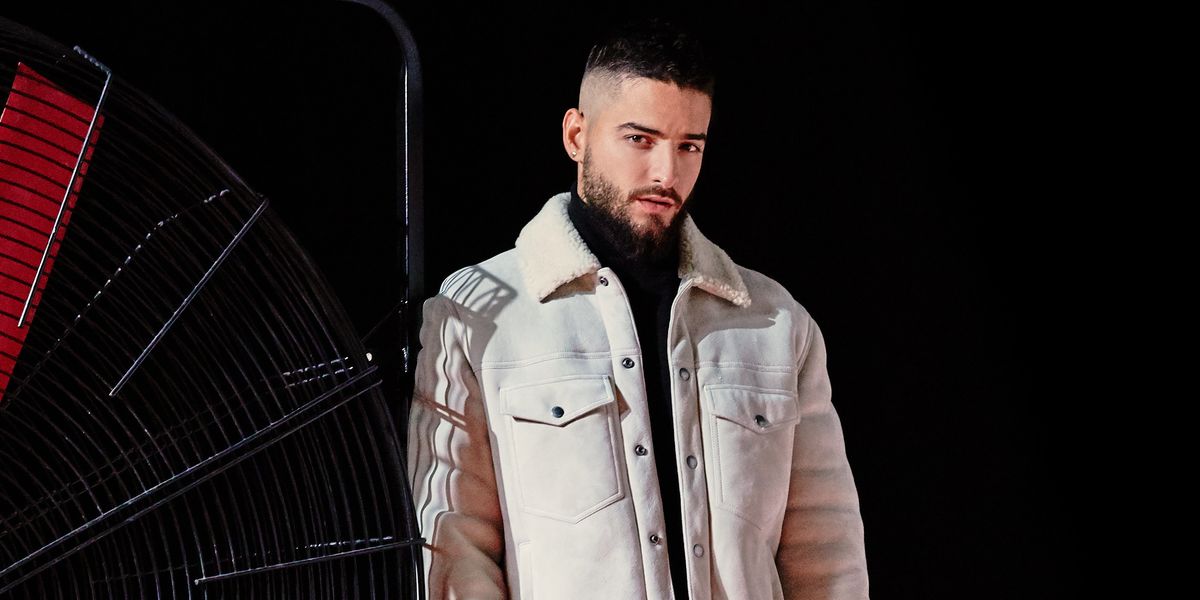 Maluma Fandemonium Is Just Getting Started

Maluma is exhausted and planning his exit strategy. "Guys, let's pack everything up so as soon as I'm done, we can go," he tells his team before our interview begins. He's sitting on a couch in the back corner of a Miami warehouse space, drinking a beer and chatting with his manager shortly after wrapping an afternoon photo shoot.

His relaxed tone obscures the urgency of his situation. Immediately after my arrival, I'm told he and his team are anxious to catch a flight out of the city. They're mum on the details, but I later learn he's headed to Portugal to shoot a music video for "Medellín," the lead single off Madonna's new album, Madame X (he'll also appear on a second track on the record called "Bitch I'm Loca").

A feature on the Queen of Pop's lead single anoints his status as a global pop phenomenon. And if he's in a rush now, his pace of life is about to increase exponentially. It's been two weeks since the release of "HP," the lead single off his fourth studio album, 11:11, out now. On the day of the shoot, he announces via Instagram that the song's music video has already surpassed 50 million views on YouTube. Meanwhile, ahead of his world tour, Miami radio stations are playing ads for his October date at the American Airlines Arena more than half a year in advance and his latest hit, "Amigos Con Derechos," a collaboration with the Mexican pop band Reik, plays on the city's many Spanish language stations seemingly every 30 minutes.

Dressed in a pink statement sweater, yellow tinted shades and knee-high striped socks, Maluma takes an occasional sip of beer as he talks about the physical rigors of life on the road.

"Oh my god, I get ripped on my tours," he says. "Because it's like two hours of doing cardio — like spinning class." He leans back as he describes the feeling, his body remembering the grind it'll experience once again in a few months. "But I love it, because it feels kind of like therapy, too... When I'm onstage, I feel like I'm meditating on another plane."

Twenty-five-year-old Maluma, born Juan Luis Londoño Arias in Medellín, Colombia, began seriously pursuing a musical career at the age of 16 after forgoing his original dream of playing soccer professionally. But he says his years of soccer training play an integral role in his musical career to this day.

"I'm still a huge fan of sports. I love exercising, and that's something that soccer gave me: discipline, constancy, perseverance, character, the ability to make decisions."

But his love of the sport resulted in a setback recently. "I just had knee surgery, see?" He rubs a vertical, clean but still-fading scar on his knee: the result of an injury he sustained while playing soccer in Miami. He's traveling with a physical therapist these days. "I feel like in six months I can go back to the field because I really miss it."

If that sounds like a risky move for a guy heading out on a physically demanding world tour over the next few months, that's pretty on-brand for Maluma. Over the last decade, he's cultivated a bad-boy stage persona, often courting his fair share of controversy with suggestive song lyrics and racy music videos.

In 2016, Maluma's song "Cuatro Babys," in which the artist brags about juggling four girlfriends who are sexually eager and available to him at all times, spurred a Change.org petition demanding the track be removed from digital platforms after it was deemed to be demeaning to women. The petition received over 92,000 signatures. The following year, he doubled down on the criticism with "Felices Los 4," a follow-up of sorts with cavalier lyrics about infidelity. And in 2018, he responded to the string of criticisms with "Mala Mía" (translation: "My Bad"). From its music video's opening, showing Maluma buried in bed underneath dozens of women, to its lyrics ("This is my life / It's only mine... If it bothers you, my bad"), the song was a playful but defiant response to the critiques Maluma has faced as his profile has grown over the last couple of years.

In person, he's humble and grounded in conversation, but Maluma isn't shy about playing up his heartthrob status in music videos and on social media, on which he posts almost daily. Shirtless photos are one to three scrolls away at any given moment. Selling sex doesn't hurt, but Maluma has also set himself apart by taking on a more global approach to music-making than many of his peers. His 2018 album, F.A.M.E., was technically trilingual, with Maluma singing in English and Spanish and dueting on "Corazón" with Brazilian funk ostentação singer Nego do Borel, who sang his verses in Portuguese.

It's a forward-thinking approach at a time when America's Latinx population stands on the verge of becoming a majority-minority over the next couple of decades. With many more sympathetic ears, a crossover to American charts is not as tenuous as it once was for Latinx artists. Songs based in reggaeton rhythms, like Puerto Rican singer Luis Fonsi's "Despacito" and, more recently, DJ Snake's "Taki Taki," continually surpass the streaming numbers of the world's biggest English-language pop stars. Moreover, two decades after the late-'90s Latin music boom that came to be known as the "Latin Invasion," its stars, including Jennifer Lopez and frequent Maluma collaborator Shakira, have found longevity in U.S. markets, far outlasting expectations for what was thought to be a musical fad at the time. It's likely that today's Latin artists, particularly those as sonically promiscuous as Maluma, will find ways to evolve along with developing trends.

Maluma's global approach has resulted in famously devoted fans who respond in kind to the singer's racy videos and image, leaving thirsty comments below his frequent Instagram posts. And he admits his fans have gone much farther than that

A few years back, after wrapping a concert in Cali, Colombia, Maluma entered his hotel room and found two young girls sitting on his bed. "They weren't thinking anything bad or obscene, they were just sitting there thinking that they wanted a photo with me," he says. "But the craziest thing was how they got into the room, which is what I still don't know... I took some photos with the girls, and they left. But they didn't want to leave."

"When I get on a stage, I transform and become that artist... when I'm below the stage, I try to be more spiritual and take time for Juan Luis."

Maluma stresses that the nympho-playboy his fans see in his music videos is an alter ego entirely separate from Juan Luis, the actual person behind the world-famous persona. While Maluma might boast of dating four different women at once, Juan Luis has one steady girlfriend, Cuban-Croatian model Natalia Barulich, whom he met when she played his one-night love interest in the music video for "Felices Los 4." Ultimately Juan Luis, Maluma says, is a simple man not far removed from the young boy who chased his dreams on the field and, later, on the stage back in Colombia.

"When I get on a stage, I transform and become that artist," he says. "And when I'm below the stage... I try to be more spiritual and to take a lot more time for Juan Luis." He continues, "I think I try to separate those two personas because my family deserves it."

Maluma brings his family up frequently in conversation. It's clear his family, and his mother especially, are at the forefront of his mind at all times. His stage name is a combination of their first names ("Ma" for his mother, Marlli; "Lu" from his dad's name, Luis; and "Ma" for his older sister, Manuela).

Given his tight relationship with them, have they ever thought he went too far in his work? "No. Honestly, no. I think they trust me. And they know that the majority of decisions I make, I make with their best interest in mind and in my best interest, so I don't think I've ever gone too far."

Presumably, that includes the time when Maluma was first introduced to a wider American audience at the 2018 MTV Video Music Awards. At the end of his performance of "Felices Los 4," one of his backup singers grabbed his face and stole a kiss from him on live television, continuing in that award show's long tradition of controversial onstage kisses.

Maluma played it cool, but he admits the kiss was not planned.

"I don't know," he says. "It's like the dancer wanted to have her moment of fame, man. That shit was crazy." A smile spreads on his face. "But oh well, it was also cool. Things happen for a reason and people talked about it for a while and it was a show that I really enjoyed, so nothing happened. We still didn't go too far."