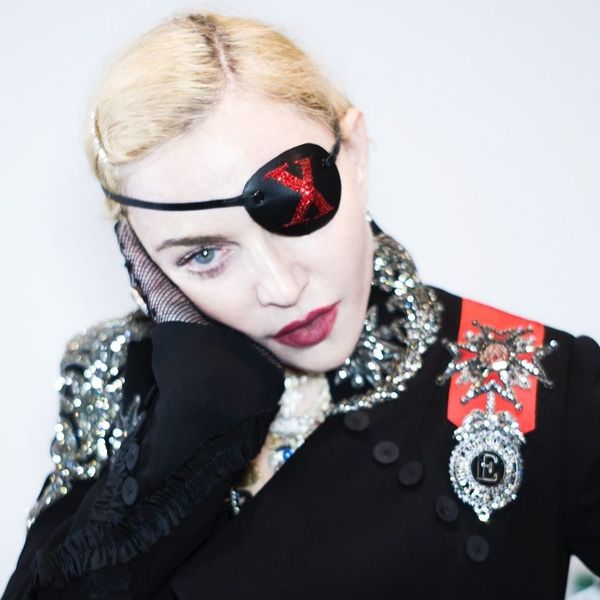 Judging from Madonna's promotional tour for her 14th studio album Madame X, out now, the pop star doesn't seem to be enjoying interviews this era. Another way of considering how Madonna is perceiving press reception for her new album — and albums before — is in how there is nary a critical examination that avoids the subject of her age. In fact, she compared her New York Times profile, whose literal headline is "Madonna at Sixty," to an experience like "being raped."

Whatever the public's perception, expectation, or even condemnation of Madonna might be, no one can put a number to the one thing that feels truest: she is unapologetically herself. With that in mind, Madonna could also be having a great time doing what she's built a legacy on during the Madame X press run: subverting and transcending all expectations of her, especially those of the media.

Her authenticity in being exactly and only Who She Is has, from the beginning, distinguished Madonna's career, and that is evident throughout Madame X. In doing so, she has also stood for the betterment of society, even if that means visible resistance. Consider this 1991 interview with Madonna on Good Morning America, during which she advocates for her right to express herself how she pleases, while also combating homophobia.

Regarding critics of her then-controversial Truth of Dare documentary chronicling her Blond Ambition Tour, Madonna says, "Well that's their problem. I'm presenting life." When asked if she was on a one-woman crusade to change the world and its attitudes about sexuality and self-expression, she confidently responds: "Yes."

This crusade has arguably guided the entire course of Madonna's career, leading up to and including Madame X. What also feels true within that consideration is Madonna's generosity and willingness to share herself in the present— her interests, both sonically and thematically, her fears, her dreams. Madonna's music and visuals have always been interpreted as "good" or "bad" based on what's relevant in the moment, but by leaning into the now, she creates a new possibility for the future.

In 2005, Madonna's Confessions on a Dance Floor leaned into dance music trends, but refreshed it with throwback genre hallmarks and by putting a magnifying glass on her then-experiences of life, fame, love, and spirituality. 2003's American Life, widely considered a political protest album, arrived at the height of George W. Bush-era patriotism. 1998's Ray of Light expanded on popular electronica trends of the moment, but spoke lyrically to her experiences as a then-new mother. 2012's MDNA, which spanned multiple styles with the dance-pop genre, covered the messiness associated with loss and fractured relationships to self and others. It also possessed a language of forgiveness.

There are endless examples of Madonna's ability to be present throughout her life and career should one wish to find them. This presence shows up again on Madame X, an album rooted in collaboration, while embracing the languages (English, Spanish, and Portuguese) and culture of where she lives and is building her life (Lisbon, Portugal) now. The collaborations are with a couple of this generation's most zeitgeist-defining Latin reggaeton and pop artists, Maluma (who guests on "Medellín," and "Bitch I'm Loca") and Anitta ("Faz Gostoso"). The same is true for hip-hop artists Swae Lee ("Crave") and previous collaborator, Migos' Quavo ("Future").

Accordingly, the songs reference the genres she is currently inspired by, and experimenting with. One review in particular sums them up nicely: "Portuguese fado, baile funk, Cape Verdean batuque, and American trap [music]," Pitchfork's Rich Juzwiak writes. The videos for Madame X singles "Medellín" and "Dark Ballet" have thus far promoted ideas of celebration and freedom from bondage, respectively. Collaboration is at the heart of unity — a message also present throughout Madame X, even as it tackles ongoing political divisions, from discrimination and war to systemic oppression and gun violence. Madonna simultaneously shares discoveries about her and others' humanity while parsing these themes out.

"They say be all I can be/ And all I want is peace," she sings on Madame X's "Come Alive."

"I wasn't lost/ I've got the right/ To choose my own life like a full circle," goes the thesis of "Extreme Occident."

"I found a new view," she shares on "I Don't Search I Find," appearing wide-eyed and awestruck. "I found you," she sings while affirming the beauty in others between the lines: "Platinum gold, inside your soul/ Finally, enough love /It's coming."

And finally, an invitation to all who can receive it, on "Future:" She sings, "Come here woke and hear the broken/ Come give hope, come give life/ Only get one, so we gotta live it right/ Come make peace/ Come with faith and inspiration/ Come complete you."

In both Madonna's musical and visual depictions of the "who" behind Madame X, Madonna describes the character as one of many things: a nun, a cha-cha instructor, a freedom fighter, and more. She posits that these facets live within her and that they live within all. The idea of someone self-identifying as "X" could be thought of as a person with no fear or limitations, free to express what they want, when they want, how they want. Free to change the world. Because they say so. A timeless "one-woman crusade."

Who else is genuinely singing about subjects like this — real-world stuff actually impacting humanity, right now — in the mainstream pop landscape? Considering the world's seemingly constant state of upheaval, violence, and destruction, if one had to expect anything from today's most popular artists, it's possibly that more of them would be promoting the kind of transformation Madonna seems to be advocating for on Madame X. Perhaps then, the world would be one step closer to achieving, "finally, enough love."