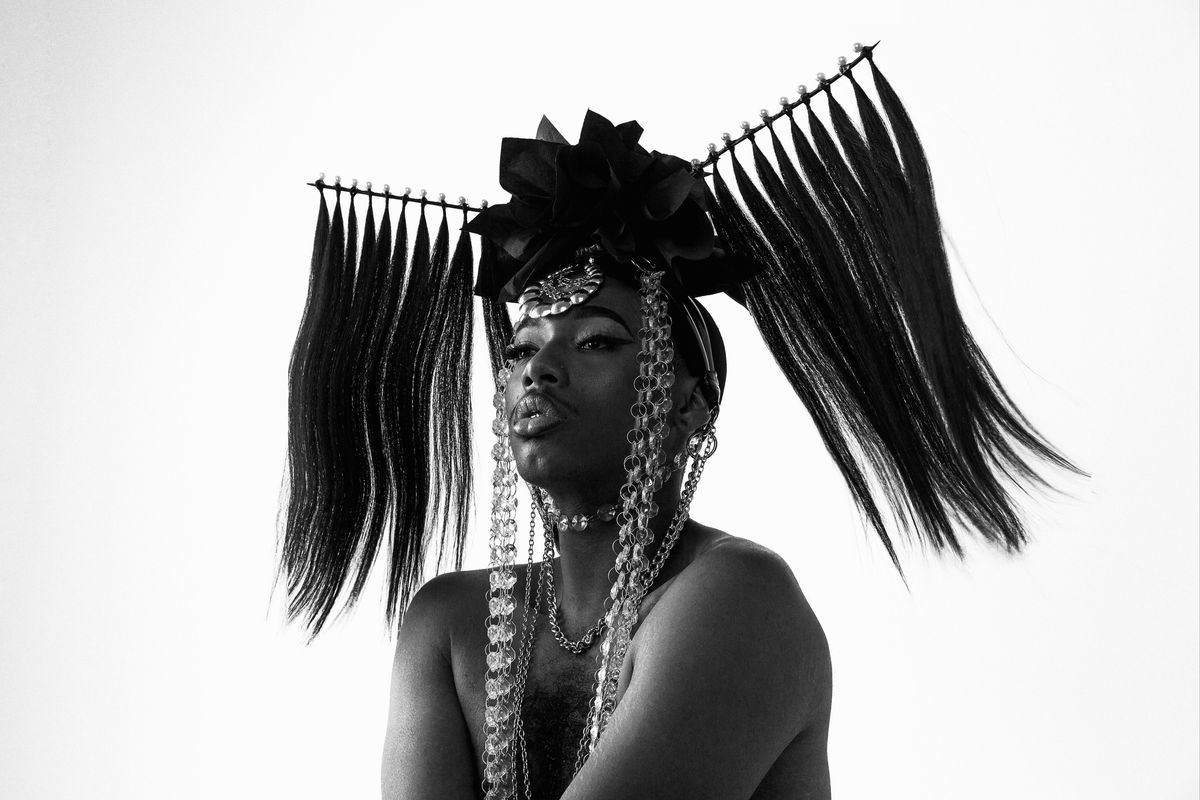 Maarquii, a non-binary artist from Portland, is fearless when it comes to self-love. And as any artist will tell you, especially if you have a intersectional identity, fearlessness is a trait one must learn to embrace. And self-love often means putting yourself first.

Maarquii knows this so well that they created a whole album of sassy, empowering anthems asserting their personal prowess and undeniable skill as a left-of-center hip-hop musician, last year's C.A.B.O., an acronym for "cut a bitch off."

The album's title track, a bass-rattling, expensive-sounding banger is essentially Maarquii's thesis, eviscerating naysayers with clever wordplay: "Smooth ya down like my edges/ Trim ya like hedges/ Progression is the message." That song, though, even with respect to its fierce message, was written from a place of mourning, Maarquii tells PAPER.

"I had gotten into it with my best friend ever and — we're both in our late twenties approaching 30," and their friend was apparently not growing. So, as the song says, "snip, snip." It has the kind of sense of humor you might find in a Missy Elliott track, which makes sense considering that she is one of Maarquii's greatest influences.

To recapture the anthemic nature of "C.A.B.O," Maarquii for the first time relinquished some creative control to a Portland-based director named Tiki when it came to making the video. The resulting clip, premiering exclusively with PAPER, features Maarquii, rocking long red hair, styling a friends hair in an empty lot, twerking on a truck, and standing tall with guards flanking them on either side.

Maarquii lets us all know why they're not the one to mess with — or, as they rap in the song, they're not "the two," either. It's less about intimidation than it is about standing your ground.

You're part of an interesting movement in hip-hop, where queer artists are adopting some of the posturing of hip-hop but they're still very much themselves. It's almost like, I'm gonna give you gangster but I'm still gonna give you a queer, non-binary version of that.

Yes absolutely. Well, you know, as queer people, we're inherently tough, so that plays a factor. And also, this for me was the first time that I allowed someone else to try their hand at the creative direction. Normally that's me. I'll sit and I'll come up with the creative and storyboard everything and then I'll meet with the videographer and work out how I want to execute it. Tiki, who actually set the creative and sent me the storyboard and the deck, was like I really want to try my hand at visual for "C.A.B.O," and he said this for awhile now and I was like, Well, we'll see girl when we get there. But when it was time, they sent me the deck and it was literally everything and all of the themes and the tone of the video that was coming to me, it was like thought Bitch, you are on my fucking wavelength. I was so gagged and I was like let's go. From there I styled mostly everything, I know how I want myself styled, I know how I want anyone else styled.

Were you nervous once you saw the end product?

Well, I think it's normal for people like me who want to be in control to then think, Oh my god, are the girls going to like it? Is this wack? And then thinking I could have done this better.

Too bad it's fierce.

I just came back to it after the holidays and had a moment where I got a little teary-eyed because I was really proud of it. And I am.

Obviously there was something in you that shifted that made you want to give someone else a shot at directing you.

I just love collaborating with people, and it was just a moment of me trying to exercise trusting people with my vision because I know that moving forward, and if I'm going to move forward, I have to take risks like that and be willing to have my vision and have what I'm trying to do be received and be expanded upon by collaborators. That was me testing myself in a way. I'm really glad that I did.

There comes a point in any independent artists' career where they have to ask for some kind of help.

Yes, ma'am. That's been my biggest lesson so far.

One of the lyrics in "C.A.B.O" is "progression is the message." So you're making progress, even if a second later you say you can "cut a bitch off" in the song.

Absolutely. I wrote "C.A.B.O," because I moved to L.A. for like seven months a few years ago from Portland. And when I came out here I was fresh off a lot of really crazy things that happened. My friend's house had caught fire and then I left this really crazy relationship all within the same three months. In light of that, I really took some time to think about the relationships in my life, platonic and romantic, in families, all around.

I really started to have these conversations with myself about the boundaries that I needed to start putting up and in place with people in order to preserve my energy and my health. When I moved back to Portland after living here for a little bit I realized, I had these instances where I realized it was time to put those conversations that I had with myself in action. There was one huge catalyst: I had gotten into it with my best friend ever and — we're both in our late twenties approaching thirty — and there were things he continued to do that we were doing in high school, and I was like, "Girl, you have not changed and you're not showing any signs of changing, you're like a huge influence in my life, and I just can't."

I was walking home from the studio one night, I was mourning this person, and that's when I wrote "C.A.B.O," sort of like I'm trying to grow and progress and anything — friends, dudes, even in myself like habits that no longer serve — those have to go. But then also you cut things off but you also allow new things, so that's where trust comes in for me.