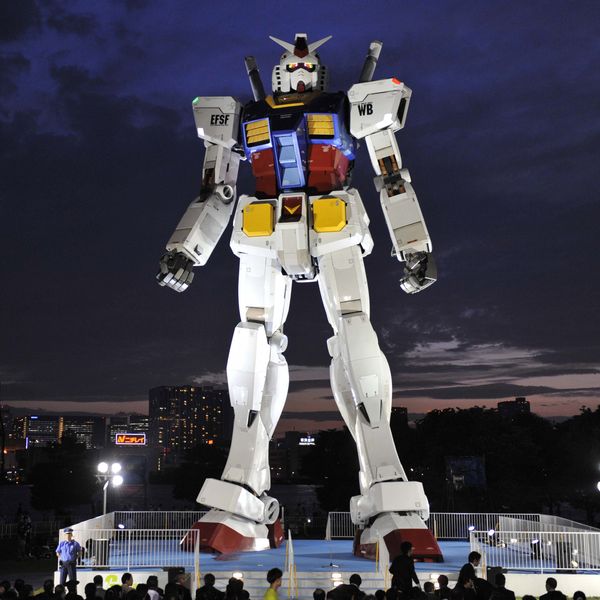 One of the highest grossing franchises of all time with copious amounts books, movies, TV shows, video games, countless spin-offs and entire sub-section of the toy and hobby industry specifically devoted to plastic robot model kits, the Gundam series is perhaps one of Japan's most prolific cultural exports on par with the likes of Pokemon, Hello Kitty and Sailor Moon. First premiered in 1979, the genre-defining Gundam imagined a futuristic dystopian world where humans piloted giant robot mecha suits to wage intergalactic war and look pretty kick-ass while doing it.

And while the aliens haven't started their invasion (yet), it turns out that 2020 is already dystopian enough on its own to warrant the creation of our very own 60-foot tall robot protector. Residents of Yokohama, Japan captured footage of a 1:1 scale replica of the RX-78-2 unit as its creators took it out on little test run right on the bay. Demonstrating an impressively wide range of motion, albeit at a very lethargic pace, the life-size Gundam showed off its ability to walk, kneel, articulate its fingers, point to the sky and stare down the puny humans it will one day crush like grapes beneath its feet.

Its actually a lot more impressive than it sounds on paper — if it was any other year, the giant robot would have probably made more of a splash but between pandemics, protests, natural disasters, murder hornets, Carole Baskin being on Dancing with the Stars and whatever new wacky biblical plague we happen to be dealing with this week, it's not hard to see why it might have flown under your radar. You would even be forgiven for initially dismissing it as some sort of elaborate CGI deepfake (we've been burned before), but it turns out the massive replica RX-78-2 is quite real and actually meant to be the main attraction for a new Gundam-themed amusement park.

The Gundam Factory was initially scheduled to open in October but for obvious COVID-19 related reasons, that has been delayed indefinitely. For the time being, the Gundam will stand guard in the Port of Yokohama just in case Godzilla decides he wants to try anything funny before the year is up.