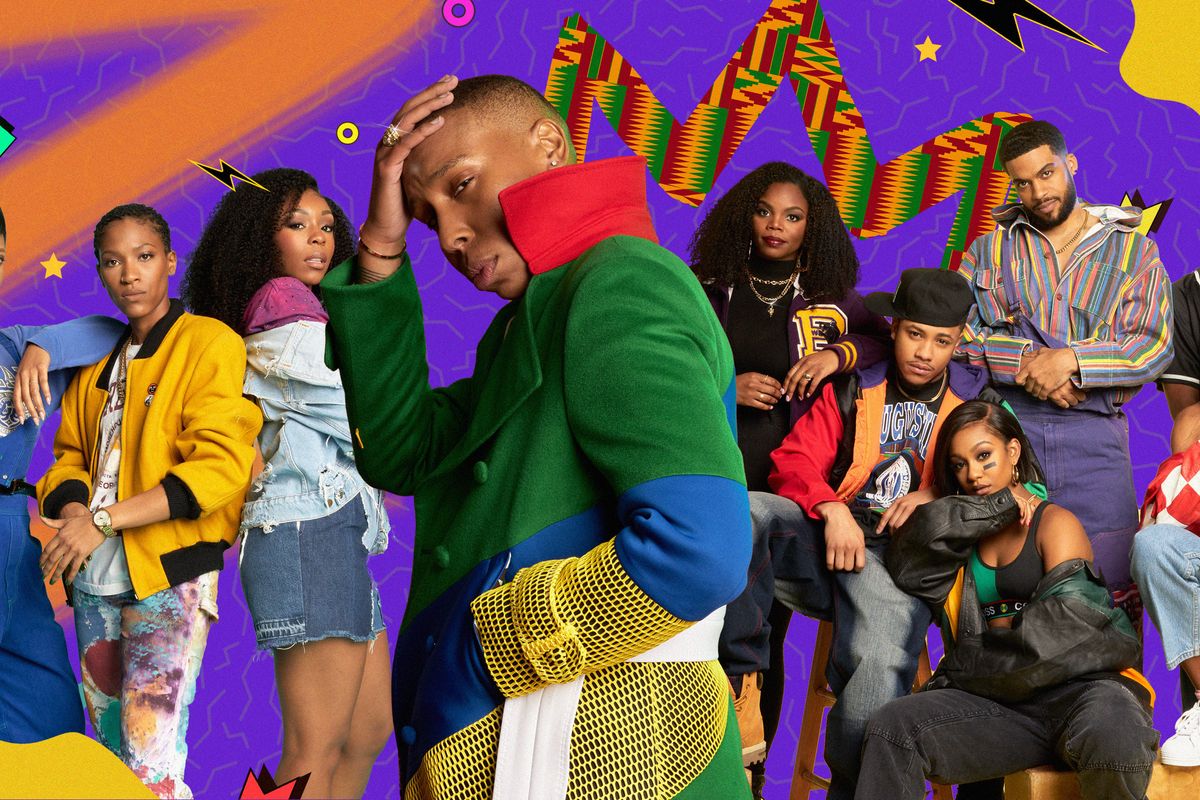 This article is a sponsored collaboration between BET and PAPER

I know immediately when Lena Waithe arrives on set. Somehow, against all laws of physics, the air shifts to accommodate her presence. Speaking voices become hushed and the distance between the people on set suddenly becomes vast, as if we are all subconsciously creating more room for her to occupy. The energy in the building becomes electric and everything is suddenly charged — the guest of honor has arrived.

I'd followed Waithe's career fastidiously since her breakthrough role as Denise on Netflix's Master of None, watching her rise to acclaim as a queer storyteller with a strong voice and an ingrained understanding of the importance of visibility. In the past five years, Waithe has won an Emmy, created and executive produced two shows (The Chi and Boomerang) with three more in the pipeline, appeared in a film directed by the legendary Steven Spielberg (Ready Player One) and written her first feature film, Queen & Slim. When we meet in mid-January, she's preparing for the return of her hit BET show Boomerang and the debut of her new series, Twenties, also on the cable network

Boomerang, which is a sequel of sorts to the classic 1992 film starring Eddie Murphy and Robin Givens as romantic and professional rivals at a high-stakes advertising agency, takes place in present-day Atlanta and centers around a group of Black millennials at various stages of professional development figuring out their lives and relationships. Actors Tetona Jackson and Tequan Richmond appear as the daughter and son of Murphy and Givens' characters, respectively, and are joined by castmates Leland Bernard Martin, Brittany Inge, Lala Milan and RJ Walker. The series is by no means a retread of the film, but it smartly engages with the original's themes of ambition, sexual politics and gender parity in the workplace by re-contextualizing them for a generation that's more conscious of the vagaries of interpersonal relationships.

Under Waithe's watchful producer's eye, this cast is finding ways to reframe old stories, from the men's depiction of a deep and sincere friendship that goes beyond the braggadocio-based bonding of the original, to incorporating both a lesbian Black woman and a bisexual Black man in the main cast with little to no fanfare. But more specifically, it announces that a new generation of Black Hollywood has arrived. They are the new Halle Berrys, Chris Rocks and Martin Lawrences. In a generation, they'll be the new standard-bearers of the Black entertainment elite.

It's a realization that feels of a piece with what seems to be Waithe's overarching thesis for her existing and forthcoming body of work. There are so many stories about Black people being made now that the burden of being the Only One has been lifted. With the breathing room that affords, why not push the boundaries a little and tell some meaty, nuanced stories? This, after all, is the "new Black renaissance." It's a phrase that comes up in the pilot for Waithe's new show Twenties,and it rings true for all of Waithe's stars when I ask how it feels to be among Hollywood's new class.

"It's a privilege! It's a responsibility. It's a gift," says Inge. Walker is more succinct: "It's lit!"

Part of that gift is an opportunity to see both themselves and other kinds of Black people onscreen.

"There's less pressure to be these cookie-cutter perfect ideals of blackness," Inge explains. "We are able to not be worried about trying to be these perfect characters. There's layers to us, and I think people need to see themselves and see their layers and specific complexities represented."

Twenties, Waithe's genuinely fantastic new comedy, is loosely based on her own experiences as a writer in the industry. The show stars Jojo T. Gibbs as her fictional analog Hattie, a masculine-presenting lesbian and aspiring comedy writer, alongside Christina Elmore and Gabrielle Graham as her straight best friends Marie (a film executive) and Nia (a former child star). It's a rare dynamic to have a queer character be the center of a friend group that also includes straight people. But for Waithe, it's a non-issue. "What I love about having a queer character next to two heterosexual characters is that you see that all their wants and needs are kind of similar. It's just that their pronouns might change," she says.

Twenties feels like both another entry into her ever-growing television empire and an outlet for the Emmy-winner to explore her own past and present frustrations with the industry she's made her home. Gibbs' Hattie is an overconfident firecracker hellbent on fulfilling her dreams in comedy, but without any of the finesse needed to play the politics that might get her there. Flanked by one friend who mothers to the point of her own destruction and another with overly specific ideas of romance, Hattie is primed to figure out what happens when you're forced to put up or shut up.

The show's three stars each stressed the specificity of their story. "You get to be nuanced. You get to be different. You get to tell stories in a way that they haven't been told," Elmore says. "I'm so excited to see characters who are young and queer and Black and they're not supposed to be standards for every millennial in LA or in the nation. Because we get to tell a very specific story that then becomes universal in its specificity."

That specificity means they can explore familiar stories in ways that feel new because the characters are new. There are lots of overconfident lead characters on television, but how many of them are Black butch lesbians? And there is no shortage of Black women carrying the weight of the world or struggling to navigate the fraught burdens of personal and professional relationships, but Elmore's Marie makes the story unique by focusing on her relationship with her wayward mother. Even Nia's staunch Jamaican pride hints at the underexplored West Indian diaspora in the US. With the freedom to move, the cast can get comfortable in their roles.

"Not to sound too Pollyanna, but people just really care about interesting characters," Waithe says. "The more specific you are, the more people can relate to the character. And I think, just like a lot of Black people have to watch a lot of white shit, as a queer person you grow up watching a lot of straight shit," she continues. "Mary Richards, Carrie Bradshaw, Clair Huxtable — those characters are so influential to me and they all happen to be straight women, but they're all very interesting and complex and funny."

Triumphs aside, it doesn't mean Waithe hasn't had trials. Specific or not, sometimes characters just haven't resonated with an audience the way she might have liked. It's hard to have missed the Discourse™ around her film Queen & Slim. Written by Waithe and directed by Melina Matsoukas, the film generated some startling criticisms that seemed less than generous. Some read her heroine Queen as a shrew who the story insisted on humbling. Others took umbrage with the apparent mea culpa of the positive depiction of Black police officers. Many more fussed over the film's climactic scene in which a violent protest is intercut with the consummation of the couple's relationship. But Waithe says it's all part of the job now.

"I think it's a little tricky particularly for artists of color. Because we want to write things for people that look like us. We want them to like and appreciate it. But there's also the other element that our community is very starved so when one of our things comes out, we nitpick it. But I do feel as a Black artist it is a little tough now because when you sit down at a computer, you're not sitting there alone. That community is breathing down your neck and making sure that you represent us right," she says.

She continues, "I just want to be able to be free to write what I want. But there's also a level of responsibility that we have to have, and I don't ever want to be irresponsible in terms of images I'm putting out. But at the same time, I don't want to make people just sort of be passive when they're watching my content. If you're not uncomfortable — if you aren't looking at things a little differently — then I'm not doing my job."

Luckily, unlike Black creators of the past, Waithe does not have to bear this responsibility alone. With contemporaries like Issa Rae, Justin Simien, Donald Glover and Robin Thede, she's part of a new Black renaissance of her very own.

"Justin Simien, myself and Issa [Rae] had dinner one night just to catch up and chat. And it's a rare thing that all three of us have TV shows," she says. "And we can talk about what that's like, and how it can be frustrating. It's important for us to commiserate and lift each other up. There's very few people who understand what this job is."

With producing responsibilities on Boomerang, Twenties andThe Chi and upcoming roles in HBO's Westworld and Simien's new horror-comedy Bad Hair, it's a wonder how Waithe manages to keep an even keel on her meteoric rise through Hollywood. But what's clear is that she's committed to making sure she's not the only one at the top when she gets there.

"We may be siloed in our own corner, obviously doing our own things. But it's kind of nice to be with the homies that you came up with and the people that are kind of doing things in the same sandbox," she says. "You just feel like, 'Oh, right. I'm not alone in this.'"