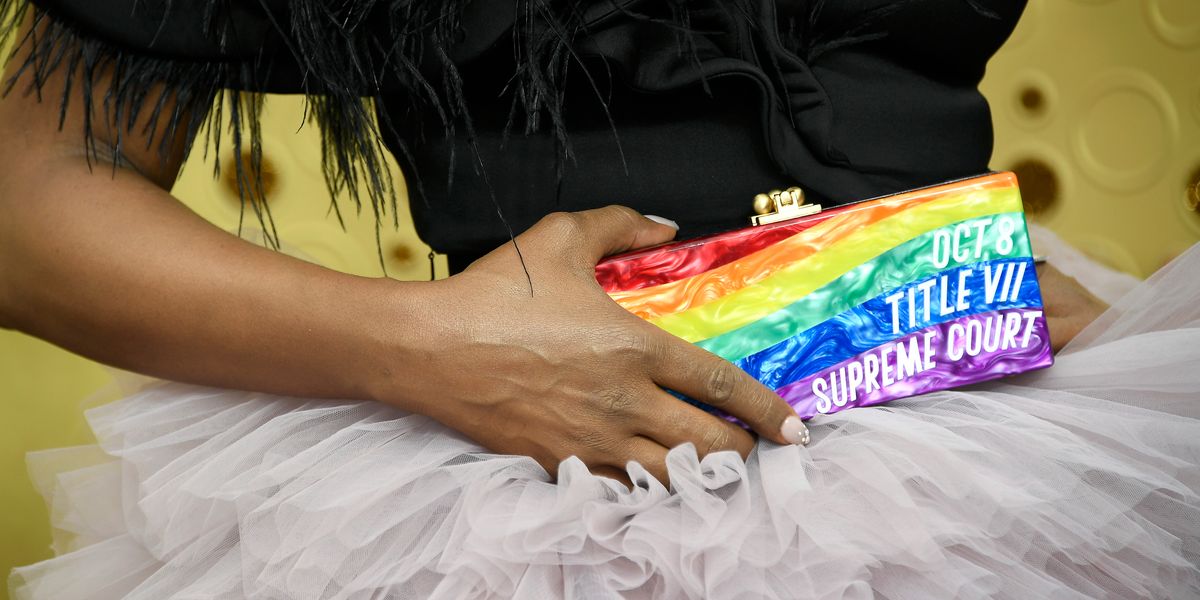 On Sunday night, Orange Is the New Black actress and LGBTQ+ icon Laverne Cox wowed at the 2019 Emmy's purple carpet with her Monsoori gown. But while her big dress was definitely something to behold, it was her small acrylic custom clutch by Edie Parker that truly made a huge fashion statement. On one side, the clutch shows stripes resembling the blue, pink, and white trans flag, along with the hashtag #TRANSISBEAUTIFUL. And on the other side is the rainbow pride flag, with words printed on the stripes that read, "OCT 8," "TITLE VII," and "SUPREME COURT."

The clutch makes a reference to Title VII of the Civil Rights Act of 1964, which is the law that prevents a work place from discriminating against employees on the basis of sex, race, color, national origin and religion. However, last month, the Trump administration filed a brief with the Supreme Court arguing that LGBTQ+ workers are not covered by the said law.

The cases of Donald Zarda and Gerald Bostock, who were allegedly dismissed from their jobs for being gay, will be reviewed by the Supreme Court on Oct. 8. "Maybe it's about raising awareness so everyone knows that our lives are in danger," Cox said in an interview with E! "A lot of people aren't talking about this case and it has implications for the LGBT community. But it has implication for women and anyone who doesn't conform to someone else's idea of how you should be... A man or woman or neither!"

The actress also made a statement with her date to the event, lawyer and trans rights activist Chase Strangio. Strangio also spoke about the issue to E! saying, "This is actually going to transform the lives of LGBTQ people. And people who are not LGBTQ. Anyone who departs from sex stereotypes, like all the fabulous people here, for example. So we really need to show up October 8th and pay attention. Their lives are on the line."

To learn more about the important Supreme Court case, watch this short video featuring Strangio by Now This News. And to learn more about the fight for LGBTQ+ rights, visit the ACLU website. If you want to help support LGBTQ+ colleagues, or all LGBTQ+ workers in the country, you can donate to the ACLU and other organizations seeking to protect all human rights.