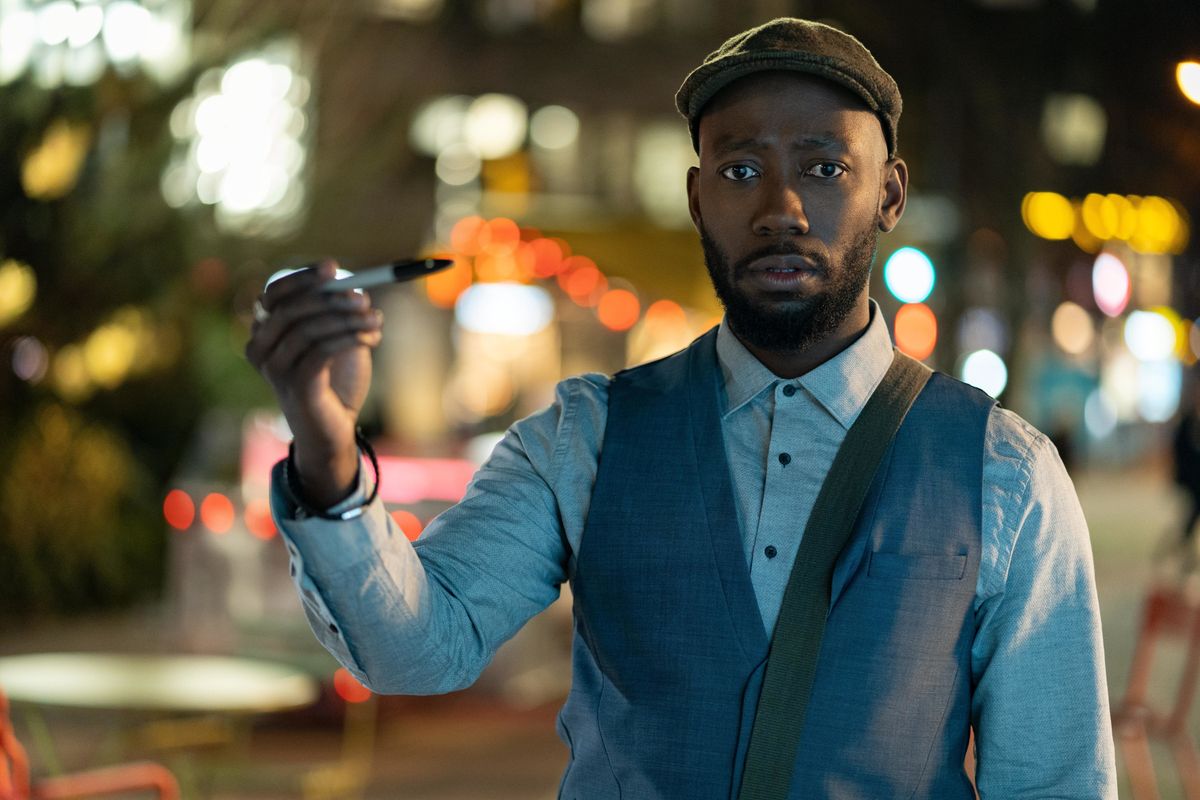 Lamorne Morris on What It Takes to Be 'WOKE'

From the COVID-19 pandemic to the continued racial injustices impacting Black and brown communities, 2020 has certainly been an unprecedented year. And for talented actor and comedian Lamorne Morris, art imitates life in the original Hulu comedy series, WOKE.

Inspired by the life and work of artist Keith Knight, WOKE places Lamorne center stage as Keef, a Black cartoonist on the verge of mainstream success when an unexpected incident with police changes everything. Part live-action comedy, part animated series, WOKE is an absurdly irreverent look at identity and culture. After years of playing supporting roles (New Girl, Barbershop, Desperados), Lamorne is finally in the role he deserves as WOKE's leading man.

On the heels of WOKE's successful first season, PAPER sat down with Lamorne to discuss his come up, being a Black actor in Hollywood, what it means to really be "woke" and why Blackness is not a commodity.

How does it feel to be the leading man of your own TV series, WOKE?

It feels great, it feels absolutely fantastic. It's been a dream come true of mine to lead a series or film and this one was perfect because it mirrors my exact walk in life. The medium is different; this character is an artist — medium meaning pen and ink, and mine being TV and film — but it's still a similar walk in life as far as the choices he has to make, his level of creativity, when to speak up and speak out. Those are all things I've had to deal with.

For you, what does it mean to be 'woke'?

To be openly aware. I think the word "woke" gets tossed around a lot maybe by people who don't necessarily know what they're saying, but it means something different to each individual. For me, it definitely means to be aware. The world has a lot of information going around, especially on social media, but when you can really see through all the fog, smoke and mirrors, you can see what's happening. That's what "woke" means for me. Now, some people take that information and put it into action with something and some don't, but still the meaning is the same. If you know better, you do better.

How much of the character Keef do you embody in real life?

A lot. He's essentially the slightly older version of myself and better looking. We have similar tastes in music, we have similar friend groups, we both have creative bones in our bodies. We even speak the same; our tones, our inflections, are randomly the same at times, so there is big similarity between Keef and I. If you close your eyes, you wouldn't know the difference, however I smell better [Laughs].

What does it mean to have a platform and opportunity as a Black actor, especially when the Black Lives Matter movement is getting so much attention?

Even without the Black Lives Matter movement getting the attention, it still means a lot to be in this position. It's just an added feature to have this going on in the backdrop. Now more than ever, our world is actually having the scary, ugly conversations that this country didn't want to have. Being a Black actor, at least I get a say in how I feel because I have a platform. People are interviewing me, asking me questions, what I think. If I didn't have this platform, I wouldn't be able to speak to what a lot of my followers ask me to. I have friends with opinions who don't have a platform, so it means a lot for me to speak for them. Hopefully this conversation can keep moving in an upward motion.

You play a Black cartoonist on the rise. What are some of Lamorne's favorite real-life cartoons or comics?

I'm an old school Tom & Jerry fan, The Simpsons, Family Guy and I love South Park. Boondocks is also dope. But my real deep love comes from superhero cartoons and comics. I love Spider Man: Into the Spider-Verse, that was dope. Not just because Jake Johnson did a terrible job in it, I just loved everything about it. I always had a love for what Keith Knight was doing, but early on I didn't know who he was. I didn't know I was appreciating him until who I knew who he was. Knew the work, didn't know the face, so always been a distant fan.

"We need more Black technicians, Black camera operators, Black transportation workers, even people who help run the algorithms for streaming services. It goes deep, it goes all the way to the top."

As a Black man in Hollywood, where do you feel the industry needs to embrace representation?

Everywhere. In every aspect of entertainment. Not just on-screen, but off-camera. There is a big hair issue. A lot of Black women and Black men don't have the proper tools to have their hair taken care of on set. We need more people of color in these positions to cater to the necessities we need when we're trying to film. So many times, I've had to go to a barber shop at 4 AM to get a haircut, then drive to the set to do the rest of my job where the rest of my cast gets to show up on set at 6:30 AM, and actually be paid to get their haircut and hair done. But I'm paying out of pocket to get my haircut then submit receipts, to get reimbursed. Now tell me what in the hell kind of sense does that make?

We need more representation behind the camera, in the writers' rooms. There are so many story lines that don't represent what is actually happening with people that look like me, that we have to on-set, on the fly, make adjustments to make it work. We can save a lot of time by hiring more diverse writers' rooms, more diverse groups of directors, people with different voices, not just the same old guard. We need it on-screen, but we more than ever need it off-screen. We need more Black technicians, Black camera operators, Black transportation workers, even people who help run the algorithms for streaming services. It goes deep, it goes all the way to the top. We need more Black casting directors. We need that for the sake of how we're being represented on camera. Because what people see is the show, but what they don't realize is that it takes an entire village just for that one frame or footage to happen.

As an actor, comedian and personality, you are building your own brand. How do you balance it all?

It's just being collaborative with your team. Having check ins with your reps (agents, managers, publicists, business managers) — it's all hands-on deck. I may have one idea of where I think I should go, but with helpful suggestions from the squad I might see I can tackle more by going left than going right. I literally balance it by having conversations with the team. My personal life can take a toll, as well; that's an element I've recently had to add to the equation. You need time to yourself, to not entertain and handle your own personal relationships. Real life takes precedence over everything. So, if your home is not in order, your work life will probably suffer. You have to take care of home first; once you have that stable, I don't want to say it's easy to juggle, but when you have the right team around you it makes it a lot easier.

Before becoming an actor, you wanted to be a basketball player. If you were, what team would you be on?

Well, I would be on the Lakers because I want to be a part of the championship run. But more so, to play with LeBron, I think he's the GOAT and would give me a lot of open shots. I want to reunite with Anthony Davis — we did a movie together, Barbershop. I made him a promise: if he ever needed me on the court, I got him. He hasn't returned any of my calls or text messages or my tweets or my DMs or my knocks at his door or my weekly break-ins, but he will call me when he needs me. When that time comes, I'll be ready. JaVale McGee is a buddy of mine and he is super tall. I've never thrown an official alley-oop to anyone because the people I play basketball with are scrubs, especially you, Kyle, you know who you are. I would love to throw a couple alley-oops to JaVale.

You're known to bring the funny. Who from pop culture do you look up to?

Dave Chappelle. He is the greatest standup comedian of all time. Dave has influenced my life in a million different ways. His journey is something that is very awe-inspiring. I think we all know a lot of his journey but getting a chance to hang out with him a little bit, you get a better chance to see who he is. He is the most genuine person you'll ever be around. Very welcoming. I look up to him.

As far as acting goes, overall, Jamie Foxx is one of my personal heroes, I think he can do everything. There is legit nothing he has ever done that I said I don't like. He can do everything: Sing, dance, act, standup comedy, host TV shows — he's an ultimate all-around entertainer and he's at the top of the list of overall entertainers. If I had to pick the GOAT, Jamie Foxx would have a strong argument for greatest entertainer of all time.

What advice would you give to up and coming Black actors and comedians?

Don't get discouraged and always remain true to your own voice. When you try to be someone else, pretend to have bits or gimmicks that you think worked for other people, it won't work for you. You might get lucky and it might work for a little bit, but when you stay true to your own voice, your voice becomes its own. When I look at someone like Kevin Hart, he has his own thing and it's beautiful to see. He's not pretending to be someone else, that's his style. Dave Chappelle has his style. You want to be the person people steal from. Remain original, there will be a time where your voice becomes the thing. You won't find that pretending to be other people. You know what is funny to you, you know what works and you have to trust it. It may not work today or tomorrow, but one day you'll get it and it will definitely put you at the top of the list of those performers.

My Black is BEAUTIFUL. (I stole that quote from a campaign, "My Black Is Beautiful," my sister Alesha Reneé (Girl Code, Guy Code) was a spokesperson for.)

Thanks to you, the world's a little more "woke." What's next for Lamorne?

What's next? Sleep! [Laughs] The world is "woke," I want to go back to sleep for literally 15 hours, take a nap, regroup and hit the ground running again. I'm anxious for a second season, to keep this conversation going, to get more educated on the state of affairs. And on a more creative note, I'm always developing, always creating. Anyone who wants to collaborate, let me know. Spike Lee, I'm talking to you. Jordan Peele, I'm talking to you. Call me.

Keep Lamorne Booked x Busy by streaming all episodes of WOKE on Hulu and follow @Lamorne.