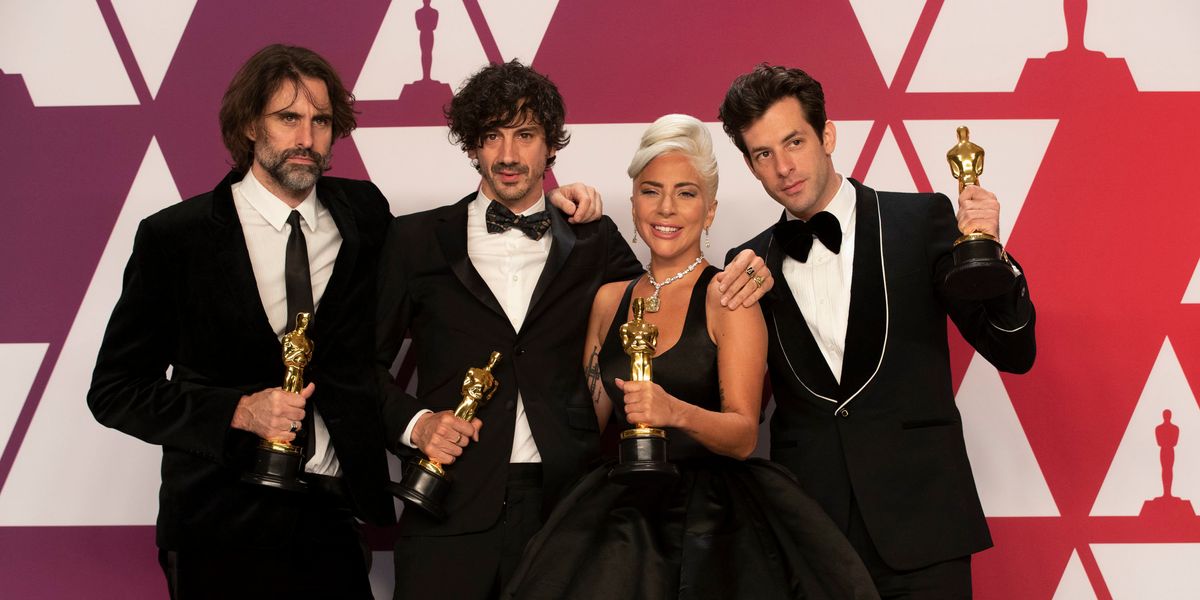 Lady Gaga, who just won an Oscar for her A Star Is Born hit "Shallow," wants the Academy Awards to reconsider gendered acting categories. Speaking to press after exiting the stage with her trophy — accompanied by co-writers Mark Ronson, Andrew Wyatt, and Anthony Rossomando — Gaga used an Australian reporter's question about the Sydney Gay and Lesbian Mardi Gras as an entry point to talk about a tricky issue.

When asked if she had a message for her Australian LGBTQ fans who are currently attending the festival, Gaga sent them her love, then brought conversation back around to the Oscars. "I wish to everyone that is going to that celebration to feel a joy inside of them," she said, adding that, "I also have a true dream in our future, as we evolve as humanity, that these award shows will not be male and female, but that we include everyone."

The Academy currently divides all four of its acting categories — Best Actor, Best Actress, Best Supporting Actor, Best Supporting Actress — by gender. The Emmys and Golden Globes keep to the same tradition, while the Grammys and MTV Movie Awards have recently done away with gendered categories completely. Gaga joins a growing number of performers to demand that the Oscars move with the times.

What could a gender-free Oscars look like? With so many movies and performances to choose from, it's definitely weird to contemplate having only two acting categories each year. Especially as Hollywood's consistently proven gender biases could mean that men are favored for trophies — take a look at this year's Best Director nominations for an example of this dynamic in action.

Related | All the Best Oscars After Party Gossip

Still, gendered awards categories are definitely a queer issue — trans and gender non-conforming actors, for example, can have difficulty knowing whether to submit to "actor" or "actress" categories. Non-binary Billions actor Asia Kate Dillon encountered this issue during Emmys submissions in 2017.

We love Gaga for her eternal devotion to her LGBTQ fanbase! Happy Mardi Gras to all.