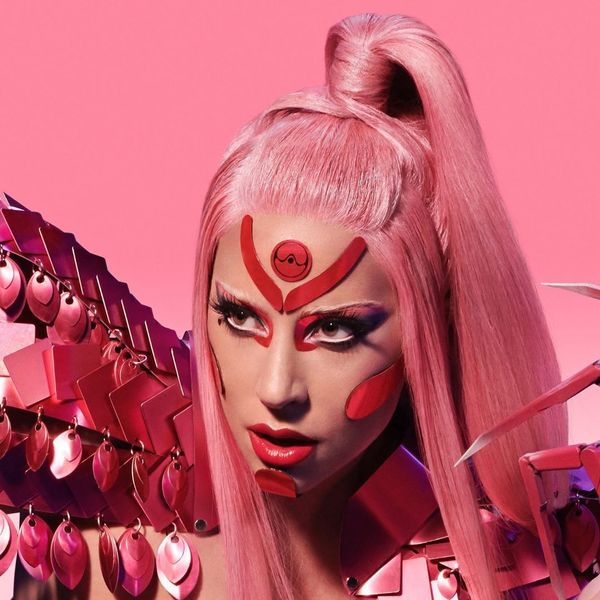 Happy First Week After "Stupid Love" Weekend! Did you learn the awe-inspiring choreography yet? Have you purchased a new pair of patent leather Pleasers to practice it in? How many times did you link arms with your besties and skip down the street singing Gaga's warped-vowel ad-libs? Just me?

To drum up excitement for the long-awaited return of Gaga as our Weirdo Dance-Pop Goddess, she has announced her sixth album, Chromatica, and its release date: April 10. (A "Chromatica" logo was prominently featured in the bottom-right corner of the "Stupid Love" music video, which was pretty much a dead giveaway for stans and conspiracy theorists alike.)

Gaga also discussed the record, which follows 2016's Joanne, in an interview with Zane Lowe on Apple Music's Beats 1. In speaking about the inspiration of Chromatica, Gaga said that because sound has "healed me in my life period," she felt moved to create a record about "healing and bravery," which ultimately led to the album's signwave symbol.

"When we talk about love, I think it's so important to include the fact that it requires a ton of bravery to love someone," she explained. Gaga further elaborated, saying that Chromatica's root word "chromatic" is associated with a broad spectrum of color and sound, and her aim was to be as inclusive as possible when making it.

She continued, adding that Chromatica is a specific place and frame of a mind, more than anything else. She said making music is her "perspective on life," allowing her to see the best in all things.

"I don't know that I've ever made an album that wasn't on Chromatica in some type of way, meaning like my frame of mind is always a part of my music, and this is just my way of kind of expressing, even in a both literal and abstract way," Gaga said, before continuing: "It's also my gift to the world in the best way that I can, and I think that everyone on any given day is doing the absolute best that they can do, and this is my perspective, and here it is, and it's always been my perspective, but now I know that it was my perspective."

With Chromatica on its way very soon, make sure you stream "Stupid Love" as much as humanly possible, below. Also, get your Monster paws on Gaga's new merch here while supplies last.