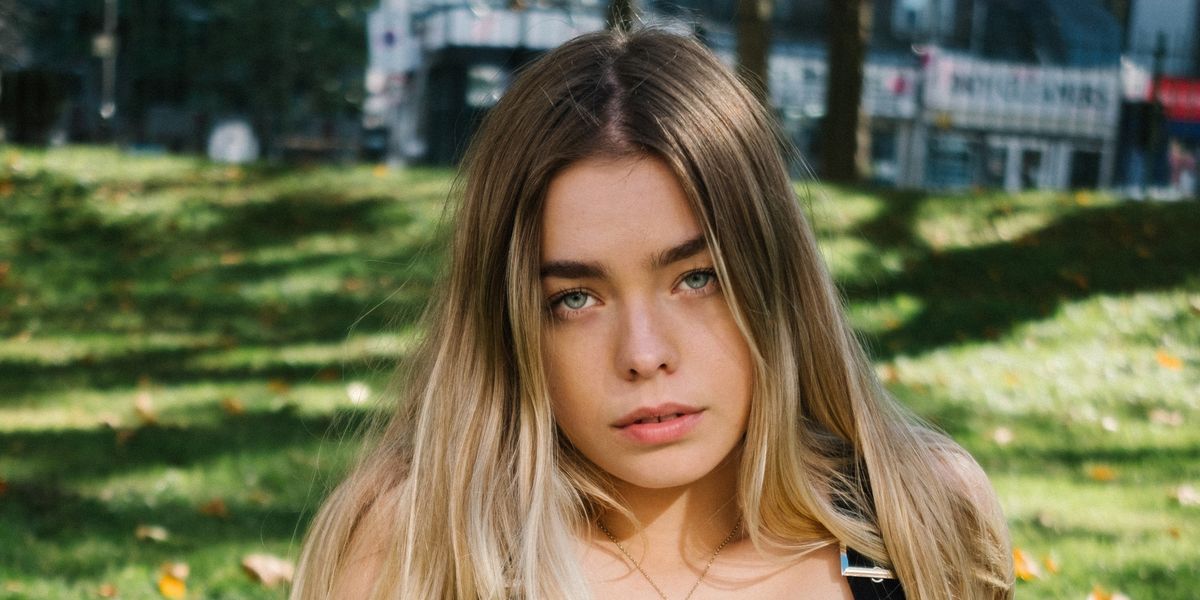 London-based singer/songwriter L Devine has always been determined to make her dreams come true, and insistent on doing things on her own terms. At age 19, Devine uprooted her life in the rural town of Newcastle to move to the English metropolis, selling her car in order to make her first couple of month's rent.

This was a massive gamble; aside from the school friend she moved in with, Devine didn't know anyone in London and almost applied to work at the supermarket across the street until the major labels eventually came knocking. She signed to Warner, released a debut EP, got Charli XCX's endorsement, and quickly became a fixture on everyone's "artists to watch" list. It isn't hard to understand why either — she's charming, disarmingly earnest, and her music never fails to make you feel some type of way.

Her latest single, "Naked Alone," see's Devine branching out from the sound she first introduced on Growing Pains and Peer Pressure. Its groovy, R&B flair makes Devine's cheery refrain about needing a little sexual release go down so smoothly you wouldn't even give it a second thought. Besides, we can all relate to the message of "Naked Alone," even if we're maybe a little shy about admitting it. "I can't take another night on my own," she sings. "Need another body here to keep warm/ Always hated sleeping naked alone."

What was the inspiration for "Naked Alone"?

I moved to London when I was 19. It was the first time I had ever been away from home really, and I just didn't know anyone at all. I moved in with a roommate, but she had a boyfriend so that kind of made it a bit, not worse, it was great to hang out with them, but I would come home by myself and they would be in their room cuddling, snuggling up, doing what lovers do and that would make me more down about not having anyone. I would just go in my room and sleep naked, alone.

What was it like taking that leap and moving to London at age 19?

I moved from Newcastle, which is way-way up north. To you, five hours in a car isn't long at all, but that's pretty much the whole of the UK. That is quite a way to go, especially because the North and the South are so different. I feel like when I go home, I'm going back in time to an old miner's town. Everyone there is so lovely and it's so peaceful, but there's not much going on. Then you go to somewhere like London and everything's so busy. People are friendly, but it's very faceless when you're walking down the street and super fast-paced, but I fell in love with it. You can really be anyone you want in London. I felt so free there. I'm so glad I moved.

How do you think that affected your songwriting? Did it take it to another level?

I think so. I think it's good that I had my past in Newcastle. I had so much time spent in my bedroom just thinking and reflecting on my thoughts because there really wasn't anything to do there. I was just going to the movies and going to a friend's house, but I definitely had a lot more time with my feelings and time to make music. Being from Newcastle helped the obsession grow. Also, Newcastle didn't really have a pop music scene at all; it's very indie, guitar music-based, and that helped me in the way that it really pushed me to get out there.

I'm sure moving also made things easier for you as a queer woman, right?

Definitely. In terms of my queerness, it was the best thing I ever did. You're so free, there's so many interesting people, it's so diverse and multicultural, and I'd never experienced that in Newcastle. I love that about London, that's something I'll never get over.

What was it like growing up queer in Newcastle? When did you first become in tune with your sexuality?

As cliché as it sounds, I always knew. I was way more obsessed with girls than my friends were. I think I always knew, but buried it away when I was in my early teens. I just avoided it. I was like, "That's not a problem, we can just forget about that," and then when you're like 16/17 all those feelings become really strong and you have intense questions about people. That was when I realized there's no escaping this. I've always been pretty secure of myself, so I think I'm lucky that I'm able to say, "Fuck anyone who wasn't going to agree with that," and there were people that weren't. I was really lucky I have a great family and friends that I trusted enough to tell them. I was pretty young in comparison to others. I came out right bang in the middle of high school. I was like, "I'm sick of pretending that I like gross boys."

Was there any hesitation about making that explicit in your music?

I've always been completely free in my songwriting and in myself. But when it was a lot more explicit and in your face, I was a bit more nervous about that. I just didn't want people to think I was cashing in on it, which is so ridiculous because that's who I am and I'm obviously going to write songs about women that I love. I've always done that, I always will do that, and it's never been any different.

Its a really heteronormative double standard.

Not even just in queerness. In the new song "Naked Alone," I feel like even saying the words, "All I really want is some sex," is even a bit taboo for a young girl like me to say, and that was also something that was really important: for me to own my sexuality and every sense of the word. That was a very important song for me to put out. Even though I think in contrast to other songs like "Peer Pressure," which has a strong message, I think "Naked Alone," even though it's literally just about me being horny, I think it's just as important of a message.

Why do you think that's such a taboo?

I don't know if it's because a lot of pop female songwriters are sometimes behind the walls. Behind the scenes, the writers on these songs are middle-aged men, but when you've got people controlling what the song's about, they say what they think a woman should say, which is really, really depressing. It's important to me as a young girl that writes songs to say these real things that I know young girls go through. Me and my friends talk about this shit all the time so why not put it in a song?

What is your philosophy when it comes to pop?

There are no rules and [pop] can be whatever you want it to be. That's why it's the music that I make because I don't want to be in this confined space where I have to be referencing back to my sound and messages that I have in songs. I did feel like that for a bit, I was kind of stressed out after the last EP like, Holy shit... what do people want me to write about now? Then I realized it doesn't fucking matter. Just write good songs, and make shit people either want to dance to or cry to.

"It's important to me as a young girl that writes songs to say these real things that I know young girls go through."

Where do you think you're going to go musically from here?

I wish I had a complete answer to that. With this song, "Naked Alone," I never thought I'd do something like that. If you told me a few years ago, "You're going to make this big funk jam," I'd be like, "Uh, I don't think I'm right for the job." But I'm just going to continue experimenting and going inside my head a bit more to see what's in there and then getting it down on paper. I never know until the day I'm in the studio.

Do you maybe have an inkling of what you want to experiment with next?

I started out doing all these pub gigs in Newcastle, just me and my guitar. I realized I never ever do that anymore and it would definitely be fun to strip everything back for a song. I'm not saying for all my songs, but I think that would be really nice.

Who are your gay music icons?

I would say Robyn definitely. Christine and the Queens, she's both a gay icon and she's queer herself, I mean the list goes on. I've always loved Christine and the Queens; she's artistically a benchmark for me. She's who I look up to; I don't aspire to be her, but I want to put in the same amount of effort and love into her artistry as her.

What would you say is your anthem, like your queer anthem?

That's tricky because I feel like it depends on what it means to you. It might not be a song about being queer, but something by Charli XCX. "Babygirl" by Charli [feat. Uffie].