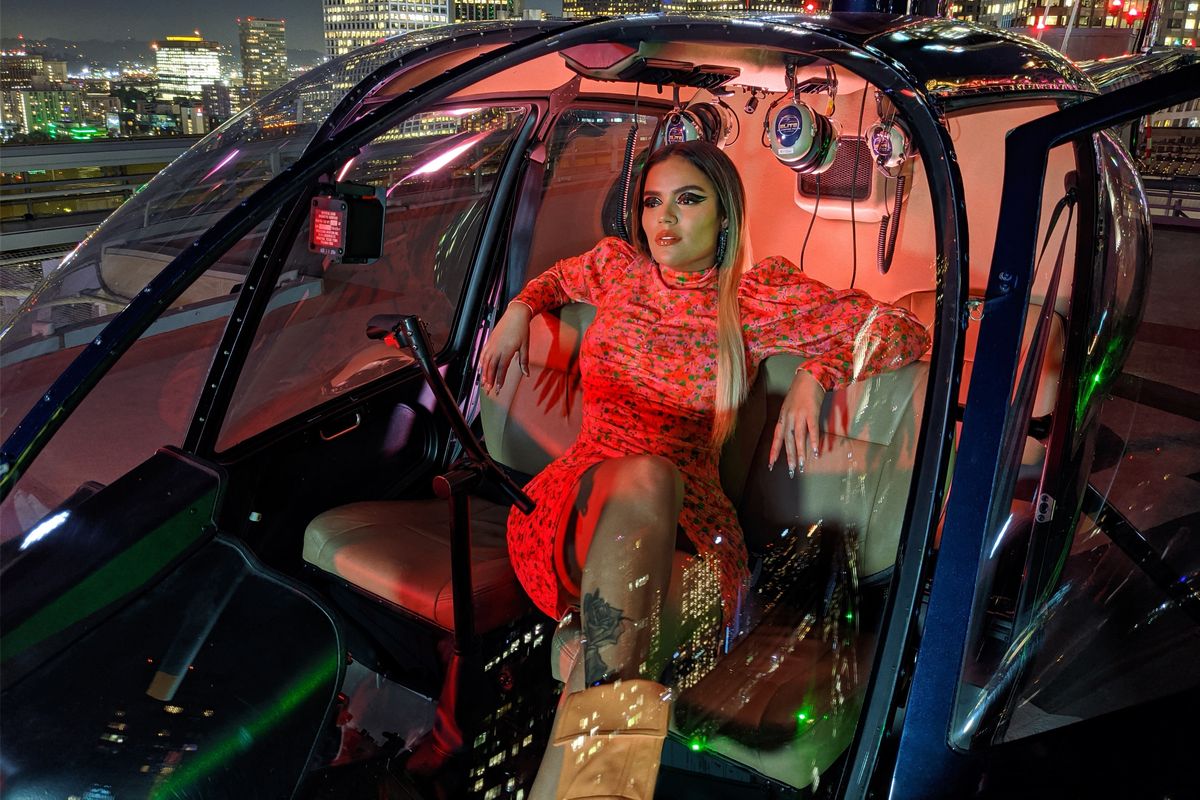 Grainy pictures have been ruining our grids for years now, which is presumably why Google developed Night Sight, and improved it even more for the new Google Pixel 4. The Pixel 4's low light photos are so crisp that we challenged fashion photographer Greg Swales to ditch his usual setup and use one for our entire Karol G digital cover shoot earlier this month. No sunlight, no flash, just the glittering Los Angeles skyline. He wasn't daunted.

Swales is a cover story veteran, having shot the likes of Kim Kardashian, Jennifer Lopez, and Nicki Minaj. This was his first time taking a smartphone to work, but he was an early digital photography convert, and in his everyday life usually ditches the professional gear for the high powered convenience of a phone camera. He can already see a world where using phones for photoshoots become the norm, especially given features like Night Sight. "I think with this phone, it does so much with so little," he adds. "A little bit of moonlight bouncing off the floor can light a face enough to see it in the photo. I could feel confident doing more night shoots and not having as much equipment. The phone just does so much."

Unless you're using a super-bright flash, which tends to create an artificial effect that goes against the naturalism Swales prefers in his photos, the fundamental challenge of night photography is movement. When you're only using ambient light, camera and subject have to stay extremely still to avoid blurring. So yeah, when the photoshoot involves a literal helicopter taking off from the rooftop of a luxury condo in downtown LA during sunset, that can be a little stressful. At one point, it was Swales and Karol G alone on the windy rooftop at 10PM, having lost every hint of natural light, the production crew behind them freaking out just a little.

"So, the helicopter had to leave at 10PM, and the pilot gave us ten seconds to get a photo while it was in the air — but we didn't want any motion blur or movement, and the helicopter obviously makes the wind blow like crazy, and everything's shaking," the photographer recalls. "He goes up in the air and pauses, we quickly run out, Karol goes on her spot, I take as many photos as I can, and he flies away." Luckily Karol G was a pro, and quickly got the memo about staying as still as possible, even in precarious conditions. "Some people were really freaked out, but Karol had her running shoes on and she was game," Swales says. "She gets excited, she's adventurous, she's not afraid to try anything. She was like a superhero."

Swales? He kept his cool by using a tripod and long exposures. It also helped that the Pixel 4's camera also stabilized the images all on its own. "If the subject were to move, it will just delete that frame," he explains. "It's multiple shots being put together to create that crisp final image."

The Night Sight shoot allowed everyone on the production team to get creative. Stylist Sandy Armeni designed Karol's looks to work specifically with the Pixel 4 camera. "With the city behind her we wanted her to look and feel like a superhero," she explains. "We used bright colors and shiny, glittery fabrics to get the best use of light and make it pop in the night." Her favorite 'fits included Karol G's orange Christian Cowan one piece, as well as a bright red GCDS look in the pool.

"What's amazing about the Google Pixel 4 is how it can take almost a black sky and really find the bit of color in it and bring it out," Swales says. "You know at night, our eyes will adjust to dark situations, and we can still see color, though some cameras don't. Night Sight makes adjustments to make night photos more like what our eyes see." This allows for a host of new editorial possibilities. "I was super excited about this project, because I personally love night shoots," he adds. "You can shoot a location at night that everyone has seen and people may not even recognize, it looks so different."

Of course, now that we've got night photography sorted, there are a few more smartphone photography kinks that need to be worked out. "I still think an issue with smartphones is the zoom," he says. "All phone photos always look good with the wide angle, when it's the full resolution of the lens, but the zoom is never quite as good. When you take portraits and beauty shots, you're not using a wide angle lens. But the phones are always the best quality with wide-angle." He will be putting the Pixel 4's Super Res Zoom to the test next, as it promises to vastly improve that.

The best thing about night shooting with the Pixel 4 was that the process forced Swales to get back to the basic concepts of photography: working with light and movement, carefully planning each shot, especially the ones involving helicopters and rooftop pools, and not treating anything as disposable. While he usually snaps around 1000 photos per shoot, when using long exposures to capture as much light as possible, he only snapped 300 photos. "It almost feels more analog in a sense, because with film cameras you don't take as many photos," he explains. "Digital definitely has made us really trigger happy, we just take tons. With professional cameras and people with their phones and selfies — they take so many tries to get it right. With this shoot, it was more intentional and deliberate: wait, get the shot really perfect, get everything ready, and then click."

A magazine shoot on a phone camera? Five years ago, it would have been laughable. Now it's becoming normalized. What's next is likely a completely different challenge. "Now that we have that high-res, crisp detail, it's more about creating memorable images, or surprising people and doing something new," Swales says. "'Because I think now more than ever, the industry is so saturated, we're seeing things so quickly. Photos are almost disposable. So now when I'm creating work, it's not just about, 'Is this good?' It's about, 'Is this memorable? Am I going to care about this 10 years from now? Are people gonna remember it?' I'm trying to take on editorial projects like this, that allow a lot of creativity, rather than repeating a formula of stuff that I know how to do. That's what keeps it exciting."