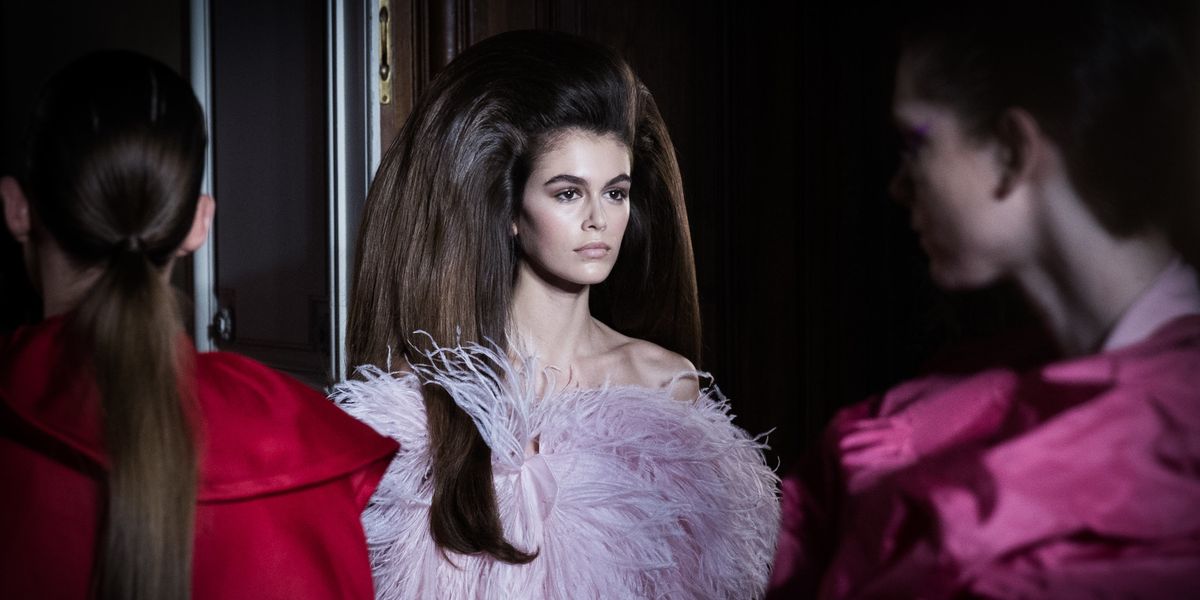 In Kaia Gerber's Honor: A History of Huge Hair

Big hair is back (or perhaps it's always been in — consider the Long Island Medium). While the sky-high tresses at Valentino seemed to make the most waves (a hair pun!), over at Fendi stylist Sam McKnight also went big, constructing neat, elevated beehives. Apparently it's a good time to invest in Aqua Net.

Related | The Higher the Hair, the Closer to Spirit

Big hair is over-the-top, requiring practice and a steady hand. It's frequently featured in fashion shows, popping up during multiple seasons everywhere from Miu Miu to Jeremy Scott to Adam Selman to Chanel. But there's a reason it endures: the styles are flattering, create a moment, and instantly signal sexiness. And these looks are also self-referential; anyone who steps out in one is instantly connected to a lineage of glamorous women and style icons, the hair incomplete without winged eyeliner and a martini.

In 1960, Chicago-based celebrity hairstylist Margaret Vinci Hedt invented the beehive, permanently shifting popular styles from looser waves to backcombed glory. She originally created the style for Modern Beauty Shop magazine, later called Modern Salon. As per Cosmpolitan, Hedt explained the style's origins to the same publication in 2014. "They called me and they said, 'Margaret, hairstyling has gone dead, there's nothing exciting,'" she said. "'We have the pageboy, the flip, the upsweep like the French twist, but nothing is happening around the top of the head.' ... I'll get out of the box and see what I can do."

The style took off due to a mix of glamour and practicality; it was high drama, but stayed put as long as you didn't mess with it too much. As Hedt told TribLocal in 2010, "I used to tell my clients, 'I don't care what your husband does from the neck down, but I don't want them to touch you from the neck up.'"

And with Hedt's invention, the era of tease combs and hair sprays commenced. The sixties were rife with big hair heroes, laying the foundation for future Hollywood types wishing to get closer to heaven (or hell: beehives are also known as B-52s, due to their resemblance to a B-52 Strategic Bomber plane). Girl group The Ronettes were beehive pioneers, wearing massive, piecey 'dos with more hair trailing below; as lead singer Robbie Spector told the Village Voice, "We came from Spanish Harlem. We had high hair anyway." Aretha Franklin, The Supremes, and Breakfast at Tiffany's-era Audrey Hepburn sported tidy, perfectly constructed beehives. Brigitte Bardot did messy bangs underneath a mountain of blonde hair, and fellow icy icône Catherine Deneuve sported beehives in classic films like The Umbrellas of Cherbourg, and bigger hair still in Belle de Jour. Bouffants reigned on Jane Fonda in Barbarella, the stars of Valley of the Dolls, and women like Veruschka and Priscilla Presley, whose famous, impossibly tall hair nearly looks like it weighed a solid 10 pounds. We have no idea how she stood up straight.

Post-sixties, a massive mane may have become less ubiquitous, but it began to signal something, a callback to a particularly glittering era. John Waters' persistent sixties aesthetic lead to teased and sprayed hair on Divine as Babs Johnson in Pink Flamingos and Ricki Lake as Tracy Turnblad in Hairspray (Nikki Blonsky's hair was no lower when she reprised the role in 2007). Kate Pierson and Cindy Wilson of the B-52s took beehives into the '80s, naming their band after the style; Pierson told Interview's Glenn O'Brien (double RIP) that the B-52 was "sort of like a bouffant, only smoother and higher. More sprayed-up." Later on, Amy Winehouse was rarely seen without a Spector-inspired tease and gobs of eyeliner, the style nearly as important to her persona as her irreplaceable voice. Today, you never see Adele without something going on up top, Janelle Monáe's impeccable retro style frequently demands a beehive, the Queen B Beyonce has worn several iterations of the style, and Lana del Rey's whole schtick requires so much hairspray that she probably owns stock in Elnett.

The bees may be dying, but the beehive lives forever.

Aggressively done hair isn't for romantic partners to touch. It's proudly crunchy and outlandish, something designed to stand out more than anything else. In the end, it's for those who would never want to hide. The bees may be dying, but the beehive lives forever.