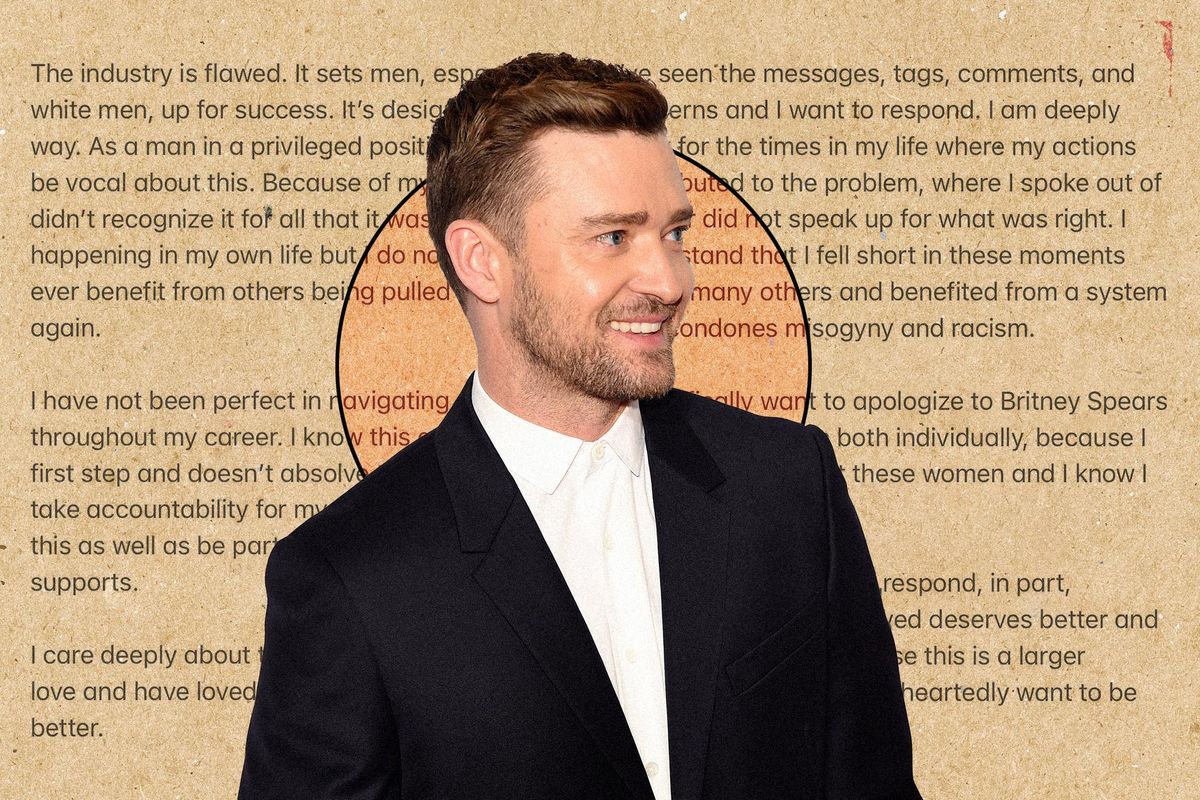 In the summer of 2020, Vanity Fair went bold, declaring the end of the Notes App apology era. "The Notes apology, arranged to make onlookers feel as though the offender had hastily thrown together a message, has now been replaced with the vague feeling someone said, go fetch the graphic designer," wrote Arimeta Diop, citing a string of public apologies that were aestheticized to camouflage among a celebrity or brand's feed. But though the era might have hit pause, it was nothing close to over.

This past Friday, 6221 days after the 2004 Super Bowl in which Justin Timberlake effectively derailed Janet Jackson's career in an incident that became known as "nipplegate," Timberlake issued a public apology posted to his Instagram. Better late than never? He also chose, in this same note, to apologize to his ex-girlfriend Britney Spears, whom he'd broken up with 19 years earlier but continued to speak ill about, like in 2013 when he called her "just some bitch" on stage, or in 2018 when he unambiguously belittled her career decisions.

The letter came exactly one week after a new televised documentary, The New York Times Presents: Framing Britney Spears, reignited conversations about the way the media and men like Timberlake played a role in perpetuating misogyny and stigmatizing mental health, mothering and female sexuality.

Timberlake opted for the tried and true Notes App apology, first popularized amongst the uber-celebrity set by Taylor Swift in 2016 when she chose the pre-installed iPhone app to issue a now-deleted statement damning Kanye West and Kim Kardashian West and accusing them of "character assassination." He used the same app in 2019 to issue another apology over what he described as a "lapse in judgement" after photos began surfacing of him, drunk and holding hands with his Palmer co-star Alisha Wainwright. (Timberlake has been married to actress Jessica Biel since 2012.)

One might think with dollars on the line, entire teams dedicated to crisis management and, in most cases, clearly defined social media presences, celebs might find more personal ways to convey their contrition. After all, the whole turning point of celebrity gossip coverage came with social media allowing celebrities the chance to both tell and frame their own public narratives. But not so for the most part. "Who cares?" one might be asking. "It's the words that matter, not the format." And sure! But the ubiquity of the format, and the way it's associated more with cobbling together thoughts hastily, indicates an inherent thoughtlessness.

"I don't think it's so much the aesthetics of them, but more the lack of effort," says Mark Glasgow, a designer and illustrator. "Not only have you written it on your phone, but you haven't bothered to record anything — although I'm not sure that would be more or less authentic." It's true, on the one hand, a recorded video might allow for visible or verbal nuances that a letter can't convey. It might also give us, the viewer, a better sense of who the apology is really coming from: the celebrity or their team. "I would rather listen to someone stumble or struggle through a video or actually talking it out and showing that 'Hey, I'm here' rather than just this cheap, typed out Notes App," T. Kyle MacMahon said on a recent episode of his podcast Legends Only when discussing the insincerity of Timberlake's apology.

I'm reminded of Snoop Dogg's video apology to Gayle King back in February, 2020 after he released an expletive-laden video condemning King for asking questions about Kobe Bryant's 2003 sexual assault case during an interview with WNBA star Lisa Leslie. "I publicly tore you down by coming at you in a derogatory manner... I should have handled it way different than that," he said in a video that was simple, direct and effective.

Related | Kim Russell Is an Oracle of the Diet Prada Age

But that form of public admission isn't for everyone. One must take into account factors like potential nerves induced by making such a public statement of penance or the idea that one might be at their most comfortable in written form. So really, it's less the note part and more the app part. Think: It's not what you say, it's how you say it.

In the case of Charisma Carpenter, it was both. The actress used her social media channels on Wednesday to make not an apology, but to speak her long unspoken truth: accusing her former Buffy the Vampire Slayer and Angel boss, writer/director Joss Whedon, of toxic and verbally abusive behavior. In her two-part statement, she alleged that Whedon made ongoing threats to fire her, mocked her for her religious beliefs, and called her fat during her pregnancy.

Her words: powerful. Her execution: poignant and affecting. "As well as beautifully written, it was very thought out in terms of format and style which made it seem more prepared... in a good way, like she really thought about it," says Glasgow. "Whereas Notes App is like, 'I'm in the car on the way somewhere.' [Charisma's noted] gave it gravitas rather than 'shit I better fix this thing quickly; better do the bare minimum.' And just to be clear I think that was a good thing. It's a serious subject and deserves, yeah, strategy."

The two-part slide, written with white text over a black background is able to say a lot with limited real estate — and to do it effectively. In thirteen paragraphs split between the slides, with no typos or grammatical errors, Carpenter shares a deeply personal and painful experience with the world on a space all her own, on her terms and on her own timing. It reads as heartbreaking, yet mighty in how clear-headed, intentional and well-prepared it was.

Related | What's the Future for @ShiasOutfits?

Can a public figure issue a sincere apology using the Notes App? Of course. But I'm reminded (too often at this point) of J. Lo's green Versace dress — and how with every rewear the heart grows less fond. Even if it's the celeb's first time issuing a public apology of any nature, the pervasiveness of the App alone can signify insincerity at first glance.

Apologies will persist — they're celebrities after all; it's part of the machinations — but the manner in which they make them, and the thought and care put into, can signal just as much as the apology itself. Just ask Carrie Bradshaw.