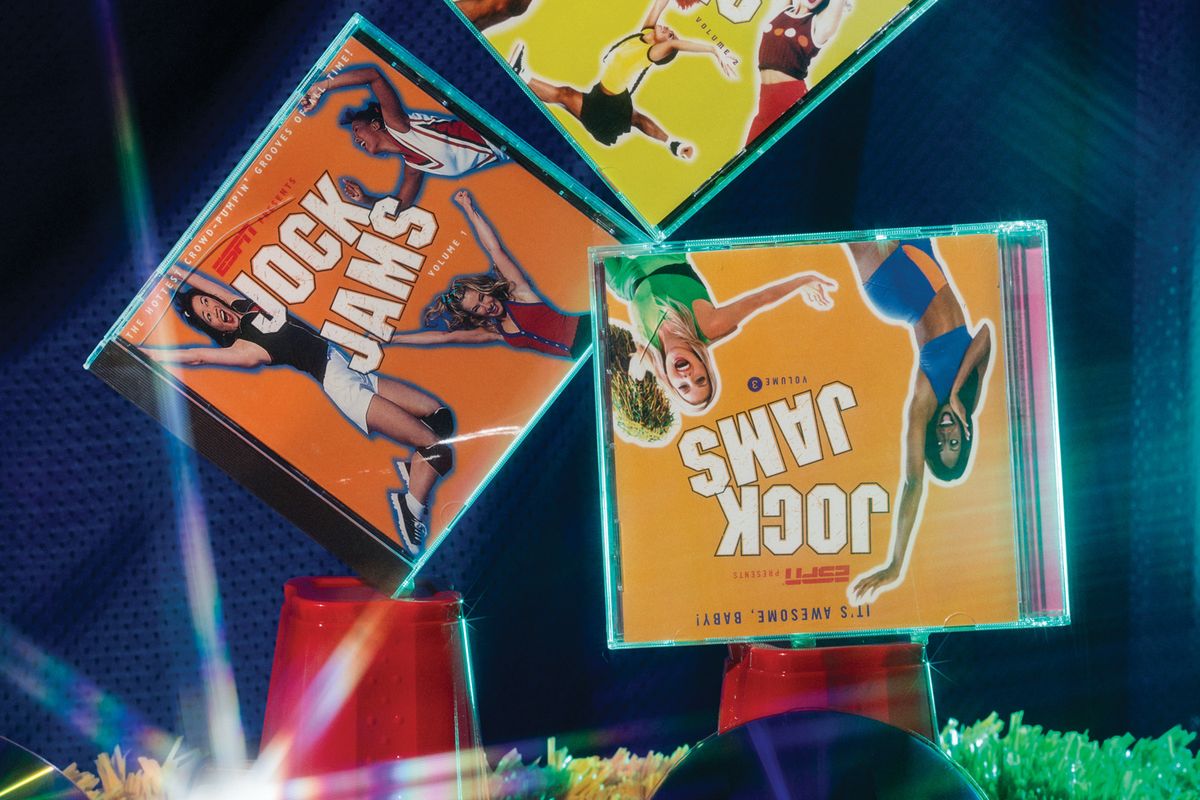 Pump Up the Jock Jams

An ode to the underappreciated greatness of jock jams.

From the wistful opening verse of "The Star-Spangled Banner" to epic Super Bowl halftime shows like 2004's infamous Janet Jackson-versus-Justin Timberlake "Nipplegate" and Lady Gaga's roof-diving, keytar-playing performance in 2017, music and sports have always had an intimate relationship. But those aren't the only examples we have of the powerful connection between the two cultural genres. Two words: 69 Boyz. Certain songs from the late '80s and early '90s, including the Florida-based group's hit "Tootsee Roll," are as commonplace at games as tailgating and kiss cams. Even someone who is uninterested in sports for the most part (like me) can't help but feel some type of way when Technotronic's "Pump up the Jam" is played loud from a speaker. Why yes, I will get my booty on the floor tonight and make your day.

Jock jams are the government term for this type of distinguished sound. They mostly include corny call-and-response hip-hop and caffeinated, lyric-lacking techno that's still catchy enough to convince the most lethargic slug to tap their toe. Songs like The Outhere Brothers' "Boom Boom Boom" and 2 Unlimited's "Get Ready for This" are highly contagious dance and hip-hop tracks that were made to hype up a sports audience. They become instant earworms, the kind that stick in your craw simply when you read the name of the song (like right now). Though many jock jam artists ended up being one-hit wonders like Quad City DJ's, famous for "C'Mon 'N Ride It (The Train)," a legendary act like Salt-N-Pepa — with their can't-help-but-dance tune "Push It" — was part of this illustrious group, too.

The term "jock jam" comes from a series of five compilation CDs released by ESPN and Tommy Boy Records in the mid to late '90s. The first album, released in 1995, kicked off with ring announcer Michael Buffer's famous rallying cry, "Let's get ready to rumble!" before blessing our ears with C&C Music Factory's "Gonna Make You Sweat (Everybody Dance Now)" and "Pump up the Volume" by M|A|R|R|S. Disco and alt-rock songs like Village People's "YMCA" and Republica's "Ready to Go" were also featured in the series, though in my opinion they don't have the same effect as Snap!'s Turbo B rapping "I'm the lyrical Jesse James" in "The Power."

The series was a success, with Jock Jams, Volume 2 reaching number 10 on the Billboard Top 200 and three other albums in the series reaching a 30 or higher slot. Montell Jordan's "This Is How We Do It," featured on Volume 2, took residence at number one on the Billboard 100 for seven weeks in 1995. Black Box's "Strike it Up," from Volume 1, peaked at number eight. The collaboration ended in 2001 with a final farewell, the straightforwardly named Jock Jams: The All-Star Jock Jams. This cherry on top of the Jock Jams series sundae included a wide variety of tunes, from Britney Spears' "…Baby One More Time" to Blur's "Song 2." If only ESPN and Tommy Boy Records held out a few years longer, Outkast's "Hey Ya!" and Fergie's "Fergalicious" would undoubtedly have been included in this beloved series.

I was the co-captain of my high school's drill team, a squad that helped support the marching band at football games and at parades. Wearing pillbox hats and white go-go boots, we'd perform a hybrid of dance and military moves while the band played their instruments. Football season had us assembling into kick-lines on the field at night, but in the afternoons before the games, we'd perform choreographed routines at pep rallies to these same high-energy jock jams (though I do remember one performance to the Mortal Kombat theme song). I can still visualize those afternoons in our school auditorium, the energy that these heart-pumping, booty-shaking songs produced for my peers, the enthusiastic vibe of the crowd building and building. It was thrilling.

Jock jams are a balm to the soul. When the scoreboard looks pitiful and your team is on track to lose, one note of "Who Let the Dogs Out?" could shoot out from the speakers and you'd be cheering once again. They provide a common link, a connection to our fellow man despite the "uncoolness" of the song. There is no room for pretense with jock jams. You can turn to a stranger during halftime to find them singing along to Freak Nasty's "Da Dip" or attempting to Tootsee Roll and feel a sense of kinship you wouldn't find anywhere else.

Unfortunately, there's a lack of jock jams nowadays. Most of the songs you hear at games in 2018 are the same anthems you were doing The Running Man to decades ago. But history is bound to repeat itself. It's only a matter of time before the jock anthem returns to the mainstream's ears with a vengeance. If Bruno Mars is bringing back New Jack Swing, then surely we can have hope for another '90s-era musical genre reboot. Oftentimes music can feel too serious or too cool, and some people only feel safe to express taste for what can be considered lowbrow if they call it a "guilty pleasure." But jock jams are more than that: They are anthems that can unite the world. Let us bring them back. In the words of the great and wise Technotronic, "People don't you know, don't you know it's about time? Can't you hear the jam is pumpin'?"