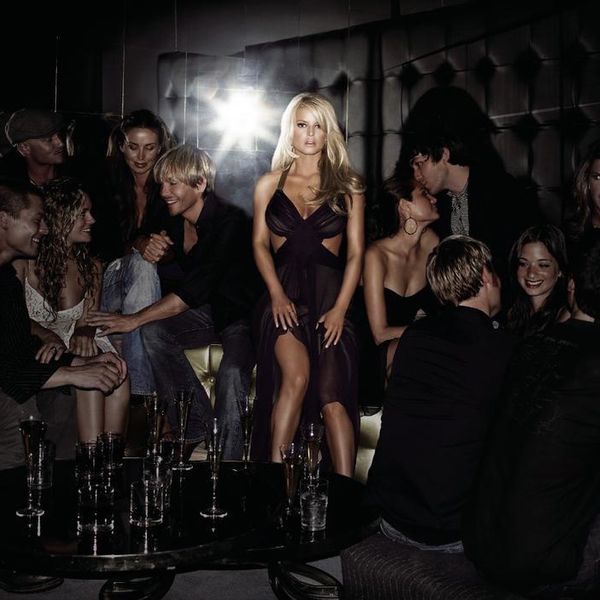 Happy Birthday, Jessica Simpson! The honey-voiced Cancer turns 38 today, and in tribute, we thought it was only fitting to celebrate one of the pop queen's most major moments: the video to "A Public Affair," which arrived, via a TRL world premiere, on July 19, 2006. Let's pour one out for MTV music video world premieres, by the way.

What's iconic about the casting is that "A Public Affair" doesn't shy away from being explicitly for the ladies, with the only men in the video acting as playthings and helpmates for the girl-power group. It's only right then, that they lock arms and literally twirl circles on a roller rink floor through their sea of admirers.

But the video itself is, effectively, a cheeky commentary on private life in the public eye, and how the two inevitably intersect when you're famous. It's also very life imitating art, in that this was released after Simpson divorced Nick Lachey, post-Newlyweds. "All the girls stepping out for a public affair," indeed.

It makes sense that Simpson has her chic Halston-esque crew play up the trope of "famous celebutantes" in the video. In the opening scene, the women perform a pretty hilarious opening bit in a limo, with the glow of camera flashes from the outside highlighting their already-luminous manes and visages, about how just famous they want to be. The foursome riff on things their peers have done to grab the spotlight, including but not limited to "having babies in Africa" and "becoming the most downloaded person on the Internet."

And of course, while the crew all hold their own comedically, Simpson's pouty-pensive facial expression is the kind you have when you just know you are Glamour Personified. "I want to be so famous that every time I fall in love, Oprah does a special about me," she declares. When Ryan Seacrest, limo driver, chimes in about his hairstylist getting his own show on Bravo, the women look at him as though he spouted a fish tail from his forehead. Could you ever be glamour?

As the video continues and camera flashes trail the women throughout the rink, they cast it all off with a lighthearted, but knowing air that only those accustomed to constant public scrutiny could understand. "A Public Affair" was, in its sonic and visual hi-fidelity disco-inflected brightness, both brilliant PR and an uncanny look into how Simpson opted to deal with her very public private life. As the first single and title track to her 2006 album, it presented an image of a post-divorce Simpson who hit the club to cure the blues, cameras be damned.

This, at a time preceding the soon-to-follow fame-is-bullshit confessions of Blackout-era Britney Spears. This, at a time when media-savvy icons like Paris Hilton were the very embodiment of Fame Incarnate. But "A Public Affair," is above all else, an example of what Jessica Simpson (whose music, fashion and beauty brands are currently valued at over $1 billion) did best when she first captured America's hearts in the mid-aughts zeitgeist: She laughed all the way to the bank.