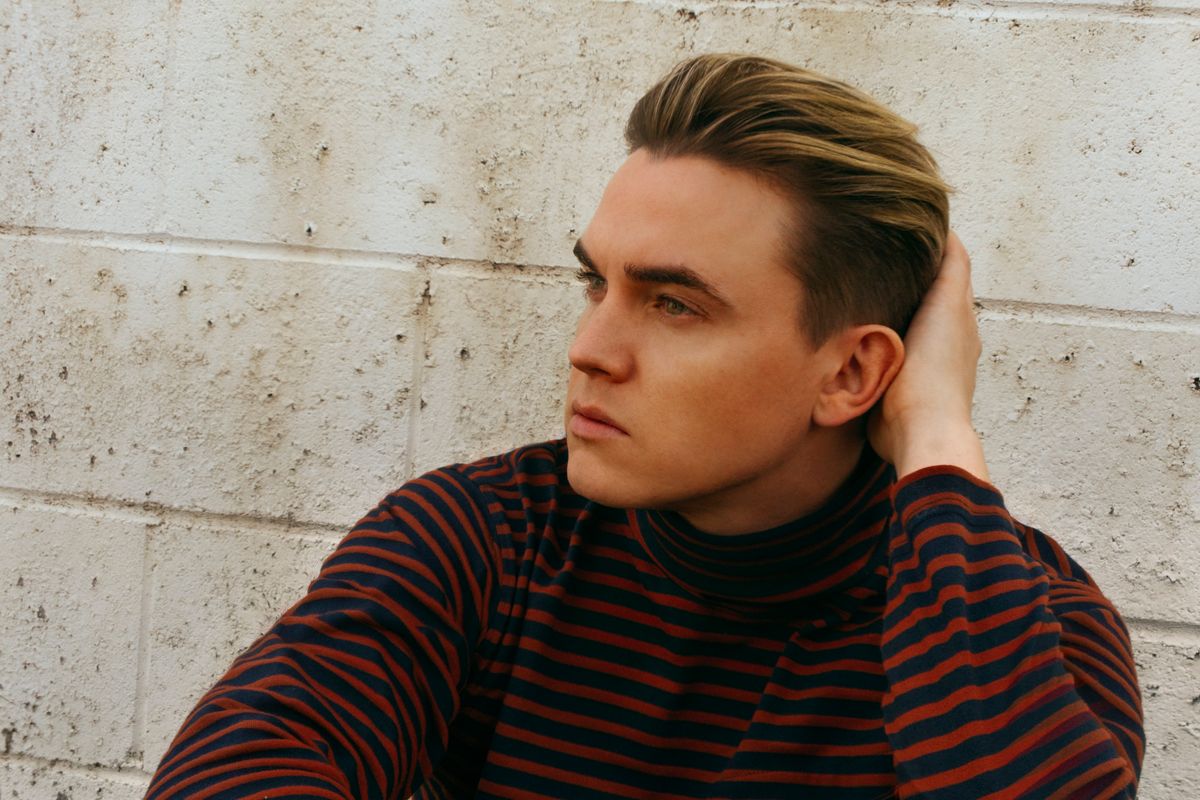 Checking in With Jesse McCartney Under Quarantine

Jesse McCartney's name has been all over social media this past week, trending after it was revealed that he had been the Turtle on FOX's The Masked Singer for season three of the singing competition. Fans of his were disappointed that he didn't ultimately win, instead losing to The Real Housewives of Atlanta star and former Xscape member, Kandi Burruss, but McCartney didn't dwell on the loss for long. Instead, the singer is gearing up to release his first studio album since 2014's In Technicolor — and he's kicking it off with the perfect quarantine single.

When you think about some of pop music's early 2000s perfectionists, McCartney clocks in near the top of everyone's lists. After breaking out with "Beautiful Soul" and penning Leona Lewis' "Bleeding Love," the musician continued to make gems that followed his smooth formula of dreamy vocals and heartthrob lyrics, evolving his sound over time to fit the tropes of any given musical era.

While his new music doesn't exactly transport you back to his days as the sultry singer of 2010's "Shake," it's got all the elements of a quintessential McCartney track. "Friends" is the beach-y and upbeat answer to those missing their closest friends under lockdowns around the world. Along with a catchy and distorted dance break and a chorus of chanting voices, the track ends up feeling like the late nights of festivals past.

To talk about his new single, DIY rollouts under lockdown, and his recent big welcome to the lip syncing app, TikTok, Jesse McCartney chatted with PAPER about all things quarantine-related. Read the full interview, below, and watch the lyric video for "Friends" ahead of the official music video release in the coming weeks.

Hey there! How are you?

I'm doing as best as I can, with the circumstances, but hanging in.

Exactly. I mean, I've been watching your Instagram. I saw you got to do a live performance. So it's like concerts aren't dead completely!

They're not dead completely. We're doing a lot of concerts still and I've got some charitable concerts coming up this weekend — and obviously the single's coming out. I'm definitely staying busy. I'm just getting a lot better at shooting my own videos.

It's been good man. I mean, it's a little bit more work to be totally honest. A lot of people will reach out and be like, "Hey, we want you to do this." I did an interview recently for this other publication, Delish.com, it's more of a food-based thing. They wanted me to do a tour of my kitchen. I was like "Oh, that's great." And they're like, "Normally we send a crew, but you can just shoot it yourself." And I'm like, "Oh, okay. I'll be able to knock it out quickly." And it took like Katie [Peterson] and I six hours to shoot it.

And then there you are on iMovie 10 hours later.

Exactly. I mean, look, we've got nothing else to do and I'm becoming a prolific editor at this point.

Amazing. Have you been recording a lot in the house? Or is it more of you just prepping this new music to go?

Yeah, I haven't been recording really at all. It's just because I, thankfully, finished this entire project just before quarantine. I went into mixing this album just before they called the quarantine. So it was kind of a blessing and a curse. I wouldn't be able to really record top-quality music in my house anyway. I don't have that kind of setup in my home, so I'm thankful that I finished it. But at the same time, I'd like to be touring it and doing more press.

Let's talk about "Friends," which is kind of timely for right now, because I'm definitely missing my friends.

It's funny that it worked out that way. To be totally honest, the song was written probably almost a year ago.

Ahead of the curve.

I had no idea that we were looking at a pandemic before the song was written. I think it does speak to the time. I think it was one of the reasons why we wanted to release it as the next single. It's uplifting. It's got this good spirit to it. And I think there are a lot of people out there, including myself, who are feeling nostalgic for their friends and missing going out to the beach or going to a bar, going out on the town. I know I'm one of those people. And so I think it's the perfect single for the times that we're in.

When everything started locking down, where were you at? Were you touring at all?

No, I was home. I was pretty much just getting prepped and mixing the album. That was pretty much it. I mean, I was going to the gym and trying to get in shape. I was getting ready for an Australian tour that was about to kick off within three or four weeks. So I was getting in shape for that. And then quarantine just left me behind the stove and behind a screen every single day, so that fell to pieces pretty quickly.

Katie and I, we talk about how we can probably gain some weight and lose it all before anyone even knows.

If the 'gram didn't see it, it didn't happen.

Exactly. That's it. We've just been home. It's been a bummer canceling, a lot of touring stuff got canceled. I was supposed to do the So Pop tour in Australia and we were planning on doing an American tour in the summer. We never announced it, but we were hoping to. We were starting to route it and then we had to shut that down. So, obviously everybody's taken a hit. I think in an industry where you rely on people congregating, that especially is going to take a hit.

With that being said, how do you think a song like "Friends" will live outside of that live music space? It very much is a grab-a-beer, see-your-friends type of song.

Where in the process of making this next big project did "Friends" come about? Was it more of a mid-point, a jumping-off point?

I had a lot of songs already put together that I think were more reflective of my relationship with Katie, and sort of the new stage that I'm in, in my life in general. The whole album talked a lot about what it was like for me growing up in the industry and how it's been, the ups and downs of what it's like being in the spotlight at such a young age. I reflect on that a lot, and it's very honest and romantic, but there was a moment where I felt we could slip in something that didn't have anything to do with that. You don't hear a lot of pop songs about friends and songs in general that are about your closest, closest friends, which for me, in my life, are as close to me as my own family. I think this was an opportunity to do that. When I went into the studio I said, "Let's do something that has nothing to do with being in love or nothing to do with my personal life, in terms of the industry, but more about what my relationships are with my closest friends who I see every day or talk to every single day." It's a nice balance of heartfelt and a summer jam. I feel like it checked all the boxes and just went perfectly alongside the rest of the songs on this future album that's coming out.

When you get in the studio and you're making these personal songs, and then you get the urge to make a more lighthearted pop song, does it break up the flow of that more intimate songwriting process?

Well, I think you still have to keep it in the same sonic arena. If you find a way to keep it an uptempo song, it's still cohesive with the rest of the album. There were plenty of uptempo songs that I had to trim the fat and not put them on the project because it just didn't feel like they belonged. But because of its lyrical content, I think "Friends" still has this heartwarming feel lyrically that felt like it matched, but it's a very good point. Sometimes you get in there and certain songs you write might be great, but just don't feel like they're a part of the same project. I hate that as a consumer when I listen to an album. Sometimes I find out that certain songs have been put on that were written years ago from another album.

With producing the video content and the imagery that goes along with "Friends," and then also with the rest of the project, are you approaching that any differently in terms of having it be a more solitary process?

We're releasing a lyric video with the single, just because we were so restricted with what we could do, our resources were so limited with what we could do because of the pandemic. You can't have a film crew, you can't shoot your stereotypical music video. We're actually leaning and thinking about doing something where none of that is required and doing something that's a bit more quarantine-based. I can't go too much into specifics, it's not completely concrete yet, but it's definitely affected how we've had to rethink shooting content for this album. I'm just thankful we got all of the photo shoots and images of me done before. But the biggest struggle I find right now is the music video angle and how we can achieve great content within the confines that we're in.

Are you consuming any other artists' quarantine-produced content? Are you getting inspiration from the ways people are getting creative with their music video processes?

I haven't seen a lot of music videos honestly since I've been in quarantine just because we spend so much time, my fiancé and I, shooting our own content. It takes days to edit and get all the right beats and put together bits and do the writing. I've honestly just been so focused on my own work, I haven't had a lot of time — but I have been on Instagram and I've been seeing a lot of people doing their quarantine videos. I just recently joined TikTok because I just found myself becoming immediately addicted to that app. Something I did not need was another social media addiction.

I find TikTok exciting, something about the artists being on there. I just end up watching all the funny videos, that's my problem.

Yeah. You start watching some of the dance videos and listening to music and then all of a sudden you're 50 videos into the flip-switch videos. But yeah, there's a lot of people killing it. And I just joined last week and that's the one thing I had yet to get to.