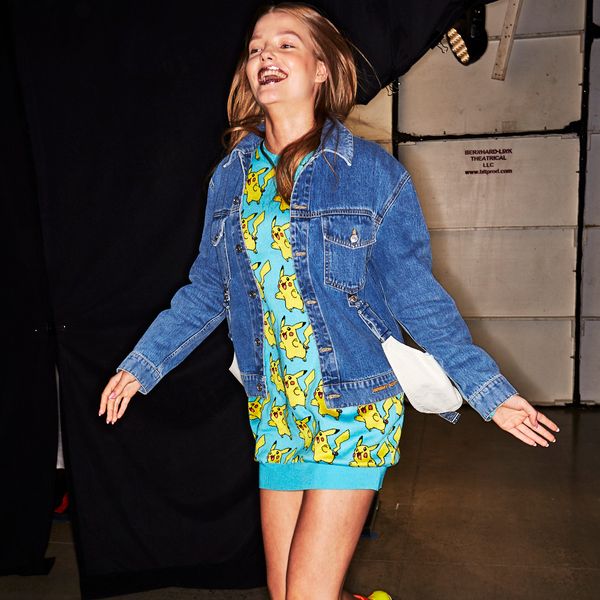 At his spring 2019 show, Jeremy Scott sent models down the runway in stylized rain and snow boots. Padded, knee-high, and platform versions of the utility footwear were seen in chartreuse, red, and silver, and even encrusted in faux diamonds.

Boots the House Down

Thigh-high heeled boots were extended up the legs, through the torso, and to the shoulders where they morphed into overalls. Divided by a zipper from the crotch upward, the curious accessory-garment combo came in camouflage, bright yellow, patch-work denim, and forest green parachute nylon.

The most eye-catching details in Scott's collection were bold, appliquéd neon words including sex, resist, peace, power, and riot, and prints of Polaroids selfies taken by the designer in 1996. The images — applied to dresses, skirts, sweatshirts, and body suits — are of Scott in experimental hair and makeup before his namesake brand was established.

Offset walked the runway in bright blue pants, yellow wellies, and a red sweater covered in a Pikachu motif as his wife Cardi B, cousin Quavo, and celebrities including Madonna progeny Lourdes Leon, Caitlyn Jenner, and Paris Hilton looked on from the front row.

Related | Jeremy Scott Made Cardi B a Custom Stroller

Offset on the runway (Photo via ImaxTree)

At the end of his show, Scott appeared on the runway in a white t-shirt emblazoned with the words "Tell your senator no on Kavanaugh," referring to Trump's controversial nominee for Associate Justice of The Supreme Court. The message was accompanied by a phone number (202-902-7129) to a line that connects constituents with their senators.