Empress Of: 'I Wanted This Record to Sound Broken'

Lorely Rodriguez is reading Many Lives: Many Masters by Brian Weiss, a book about past-life therapy that Maggie Rogers bought for her on their 2019 tour (notably supporting Rogers' debut album Heard It In a Past Life). The title came up while the two artists were discussing spirituality and "bigger energies, but not necessarily religion." Touring doesn't leave Rodriguez much time to read, but while quarantined in Los Angeles awaiting the release of her third album I'm Your Empress Of, she can't put it down.

Rodriguez says she's not typically the self-help type — but still, it's the sort of idiosyncratic, metaphysically-oriented activity I'd expect to find her doing in quarantine. The 30-year-old Berklee College of Music graduate and daughter of Honduran immigrants broke out as Empress Of in 2015, with Me, a record of cryptically profound, ecstatic bilingual synth-pop. She sounded like no one else at the time, cerebral but danceable, alien yet emotional.

Empress Of came down to earth and embraced pop on her indelible sophomore effort Us — one of 2018's best albums. Since then, Rodriguez has thrived in the space opened up by the breakdown between mainstream and alternative music, shared by folks like FKA Twigs, Caroline Polachek, Dev Hynes, Clairo and Solange. Besides Rogers, Rodriguez has opened for Lizzo, Hynes' Blood Orange and Mura Masa, and featured on songs with Khalid and MØ. "On Me, I realized I could write pop music and I loved it," she says. "I loved going into rooms with artists that are so different from me and learning from them."

"[While writing Us] I was in a really settled place," she continues. She had just moved to Los Angeles and carved out a block of time to write her sophomore album. Meanwhile, I'm Your Empress Of came together on the road, in the midst of a tour and painful breakup. "I was physically and emotionally unsettled. I was traveling all around the world. A lot of those beats I made on airplanes or in greenrooms our tour buses. There was this driving chaotic energy to the production." Us took her longer than she'd hoped to write. Rodriguez finds "settledness" creatively challenging, so it will tell you something about her emotional state that the new record wrote itself: "I came home for a few months, and I was like 'woah, something's happening to me.' I felt so creative."

Rodriguez co-produced both of her last two albums with Jim-E Stack (Charli XCX, Perfume Genius, HAIM). Us favored frothy synths and percussion with naked vocals firmly in the foreground. I'm Your Empress Of meanwhile, is a maze of clashing symbols, jagged club beats and knotted melodies. She opts for blurry vocal effects on songs like "Not The One," "Awful" and "Love Is a Drug," which turn her lyrics into beat-keeping chants, in contrast to of Us's detail-heavy storytelling. There's a few moments of the blissed out euphoria that fans have come to expect from Empress Of — like the chorus of "U Give It Up" — but overall, I'm Your Empress Of is a darker, more challenging listen.

"With both Me and Us, I felt like everything needed to be polished and intentional. Here, I learned that sometimes the bad takes sound good." says Rodriguez. "This record sounds really urgent and immediate. There's a lot of desperation. I wanted to translate that [desperation] into every aspect of it. When mixing, I wanted to keep the grittiness, like 'Don't worry about the background noise.'"

Speaking about Us in 2018, Rodriguez said, "A younger version of me would try to mask a lot of stuff by being dreamy, but the lyrics on this record are really straightforward." Indeed, she was at her most astral and prophetic on her debut. "I've been eyeing your plate of diamonds/ With an envy that kills the pride/ See the solstice that lived before/ Wasn't easy to let die," she sermonized on Me's "Standard." Meanwhile, Us was a series of vivid scenes and confessions. "I don't even smoke weed/ It gives me anxiety" she sang on the song of the same name. She poetically remembered an afternoon on "Everything to Me:" "Drinking beer out of the bag/ Watching cars and yellow cabs."

I'm Your Empress Of's lyrics sound less like diary entries or poetry than fragmented drunken thoughts. "I'm asking you baby/ Choose me over her," she begs on "Give Me Another Chance." She accuses on "Bit of Rain: "You never listen when I said it hurts." Maybe it seems counterintuitive that a songwriter gets simpler as she gets better, but this trajectory will be familiar to any writer who's had to stamp out the habit obscuring ideas in ornate language. "Sometimes not overthinking makes your message even more powerful," says Rodriguez. "There's a lot of lyrics I'd otherwise feel embarrassed about. That's the growth on this record, finding those vulnerable spots, not focusing on poetry or beautiful lyrics. It's the two AM phone calls or texts to your ex asking them to take you back. It's the rebound hook-up."

Empress Of has always been of the music-as-therapy school of songwriting. But on I'm Your Empress Of, writing was more of a life-line than ever. "I'm really bad at expressing myself in relationships and with family," says Rodriguez. "I was really heartbroken when I was on tour and I didn't process it until I went home and started writing." During one songwriting session, Rodriguez realized she needed to take her mental health more seriously. "I need some help, I need some help, I need myself, I need myself," she sings on "Awful," which also contains the excellent gut-punching rhyme, "I get off on being awful to myself." "I realized I needed to talk to someone after writing that song," she says.

The album charts the full life and death of a relationship, from the thrill of letting someone call you "baby," to screaming matches, to apologies like "an anthology of empty words," to self-medication with casual sex, to begging for another chance, to wishing desperately to move on. With this story arc in mind, what of the album's deceptively straightforward title? Whose Empress Of, exactly?

The album offers two different answers. On the opener and title track, Rodriguez sings the lyric "I'm your Empress Of," over and over again on a helium plinking keyboard. Her mother Reina, who returns as a character through spoken interludes across the album, speaks the line "I only have one girl/ But the only girl is like having thousands of girls/ Because look how she reproduces herself in each bunch of you." On her album cover, Rodriguez wears a multicolored bell skirt and bandeau woven from hundreds of shiny, plasticky purple and pink ribbons and bows like a human present. "When a song is done, it's not mine anymore, it's the listener's. I love that my songs, that came from a place of pain, that pain becomes someone else's. They can use it for whatever they need. I'm giving these songs to you," says Rodriguez. 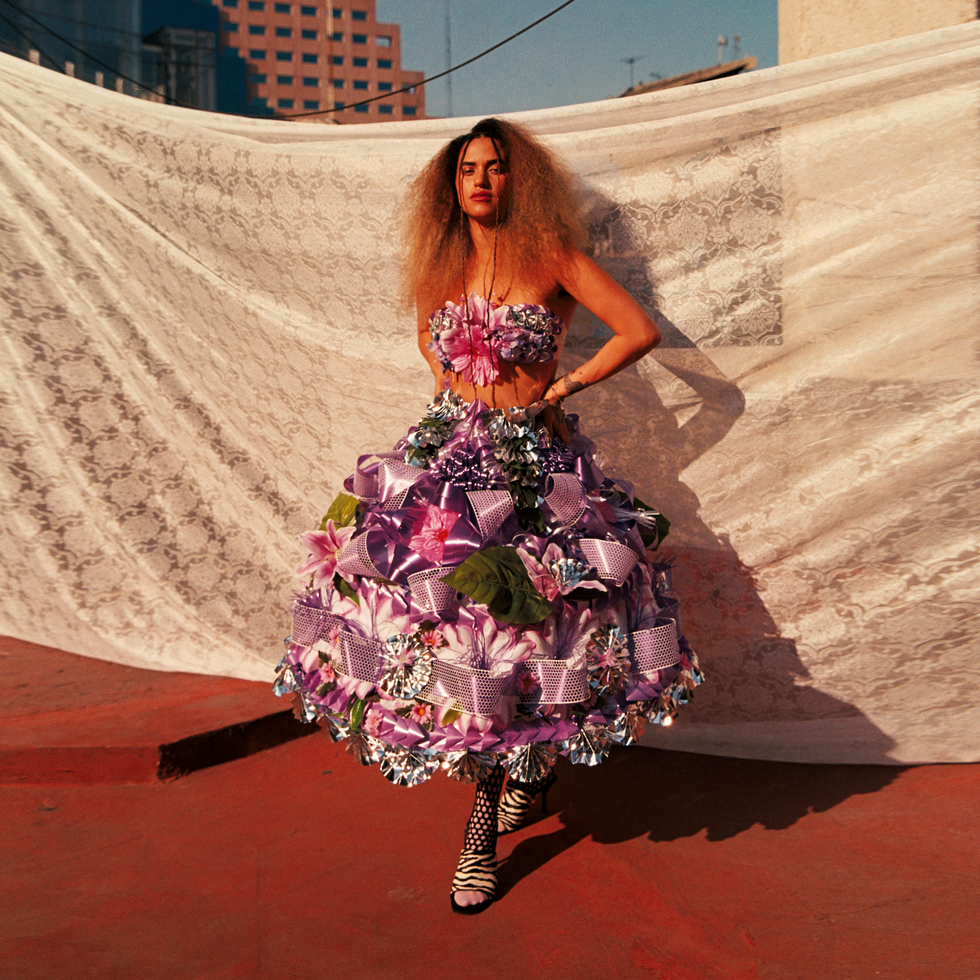 This feels like the easy answer. Across the album, often in the voice of her mother, you can hear Rodriguez questioning how to claim and define herself as a woman, after losing herself so completely in a relationship. "I can't decide what type of girl I like/ What type of girl to be," Rodriguez sings on "Hold Me Like Water." Her mother opens the album on the title track, but she returns on "U Give It Up" and "Void," speaking lines like: "Life is not easy/ Being a woman is not easy/ Woman can be misinterpreted" and "You wanna make yourself the woman/ That nobody is gonna mistreat" and "Woman is a word'/ But you make yourself the woman you wanna be."

This last lyric calls back to Empress Of's 2016 breakout single "Woman Is a Word." The soundbites of her mother were unscripted. "She talks so much shit," says Rodriguez. "She's just always running her mouth so I told her, 'Mom, come over. I'm going to record you.'" Her mother quoted her daughter's song unprompted. "That song I wrote resonated with her," she goes on. "Even though she comes from a different generation, different background, culturally growing up in Honduras, and me growing up in the states. I put that in because these painful experiences resonate with more people than you think."

Take a Virtual Tour of Fashion's Most Iconic Images