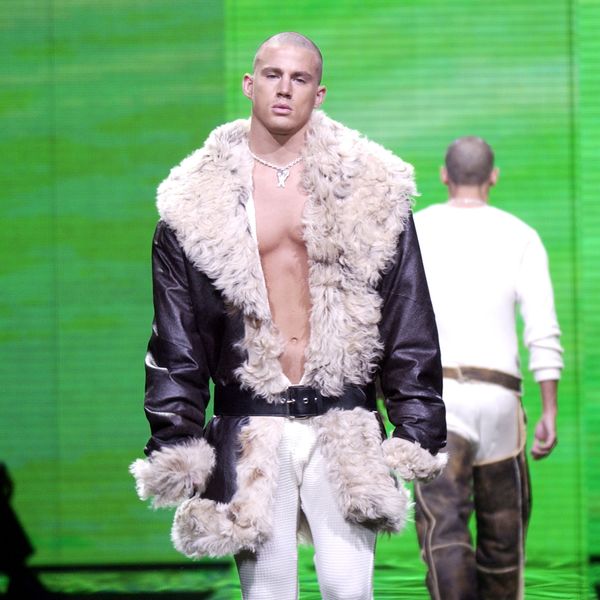 Hollyweird: How Channing Tatum Went From Stripper to Fashion Model

His transfixing smize. His cheese-cutter cheekbones. His hypnotic moves. Before acting and after hanging up his stripper thong, Channing Tatum used to stalk the runways of Milan and New York as a fashion model. He walked for brands like Marc Ecko and Sean John, and mugged in campaigns for Abercrombie & Fitch. Tatum's first modeling gig was in 2000, shooting with photographer Bruce Weber. On that set, he met supermodel Karolina Kurkova — not bad for a hunky neophyte. "I was this new guy, a nobody; she was the first to talk to me," he told InStyle in 2010. "By the end of the day, we were rolling in the mud, singing Madonna songs."

Working with VVIPs for his first job launched Tatum's fashion career in a big way. "Bruce [Weber] is the rite of passage," Tatum later explained to Vanity Fair in 2013. "If you're a male model, he christens you."

Prior to his christening, Tatum was a stripper in Miami — a time which inspired the plot of blockbuster panty-wetter Magic Mike. One day, in the street he was approached by a man who urged him to consider modeling. "He was creepy," Tatum told VF, "and actually he did end up to be just a complete creep, trying to, like, fuck me, and I was like, 'All right, man,' but it piqued my interest."

However, he didn't waste any time heading into a modeling agency to see what they'd make of his all-American look. He was signed by Jason Kanner at New York agency Major Model. When he and his six-pack began getting booked for jobs, "the travel schedule, the food, the demands brought things together for me," Tatum explained to Esquire in 2014. "Suddenly, every hour of the day was accounted for. Busy. And I never want to be without that again."

Despite his success working with the likes of Armani and Dolce & Gabbana, Tatum had his sights set even higher than a Times Square billboard. In a post-show interview in 2002 with the fashion critic Tim Blanks, Tatum expressed his desire to land in Hollywood. "I'd love to go into acting," he says, "[I'm] always looking for new opportunities."

One of those opportunities, his big break, one could argue, was appearing as a shirtless bartender of the music video for Ricky Martin's "She Bangs." He made $400 for his time.