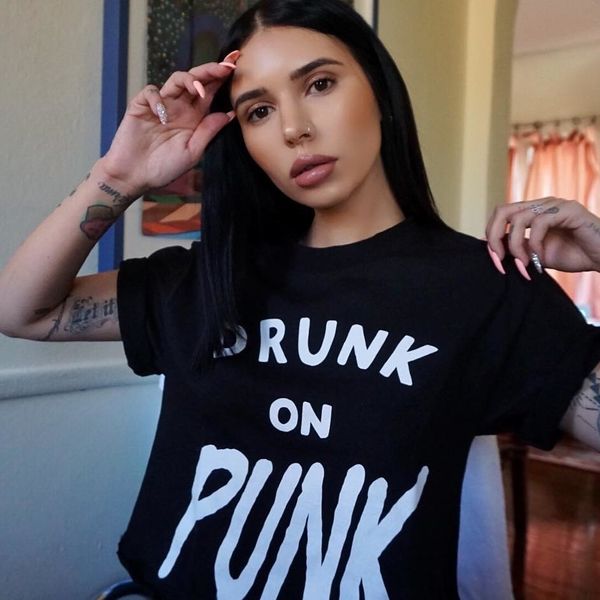 The sun is just beginning to set on the LA Strip when Hanna Beth arrives — a vision of glitter and Gucci amidst the wood-paneled sports bar she's suggested for our meeting. And though stranger people have definitely wandered into this establishment before, somewhat inexplicably, heads begin to turn as she settles down in the corner with her tequila soda, a small smile on her face as she turns her attention to a waiter who desperately wants to chat her up.

"What do you do?" He asks excitedly — a question she answers with a deadpan, "I'm a florist." And while it was meant to be a conversation-ending statement, it's something the waiter latches onto, proceeding to ask her about the floral arrangements in the bar.

Somewhat remarkably though, she doesn't waver from anything less than polite during the interaction — something I comment on once he finally leaves our periphery.

"I'm always like 'I do some things on the internet,'" Hanna — who's occupied job titles ranging from BuzzNet blogger to club promoter to reality TV star — explains, a slight eye-roll detectable from above the rim of her glasses. "I'm more proud that I wrote a book that people bought or that I did. I don't even tell people that I did [Diane Von Furstenberg's House of DVF reality show] and I won it."

Despite her unassuming attitude though, there's something undeniably magnetic about her — something that has obviously contributed to her position as an internet fixation for the past decade-plus. Arguably a social media maven before most people had the foresight to even consider it a career, Hanna influenced a generation of suburban misfits to embrace Gloomy Bear merch and an extreme side part as one of the de-facto Queens of Myspace. Alongside the likes of Kiki Kannibal and Izzy Hilton, Hanna joined a crew of powerful online icons who helped morph internet culture into the beast it is today — selfies, influencers, et al.

Speaking of the latter, Hanna laid the blueprint for the influencer model we have today when she first signed up for a Myspace account at 15. As she explains it, what she was doing as a teen — going on Model Mayhem, finding any photographer who would shoot her, styling and doing her own makeup — is precisely what she believes Instagram has turned into today.

"People say that [I'm an icon, that they look up to me], and I don't fully understand it or get it," she says. "I feel like since I did it all then, I have a hard time getting into it now or feeling inspired by it now, because I've done it for so long."

Hanna pauses for a moment, adding that it feels "so different now" since "everyone's kind of like the same."

"Back then, it was exciting to be yourself — to really be yourself, and people loved that," she says. "Now I feel like everyone wants you to be the same... Back then it didn't matter how many likes you got or what was going on."

"Now I feel like everyone wants you to be the same... Back then it didn't matter how many likes you got or what was going on."

Things are quieter for Hanna now. At 30, she's less interested in shots in the club and friending strangers on the internet. Instead, most of her evenings are spent binge-watching Blacklist with her best friend, bowling, or hanging out with her younger brothers — activities she relishes as definitively offline. In fact, if there's one big difference in her life now, it's that Hanna has established a staunch separation between the URL and IRL in the past decade-plus.

Perhaps it's a lesson she learned after dealing with the constant scrutiny and innumerable blog posts surrounding her personal life during the height of her internet fame — with everything from her friendship with ex-BFF Audrey Kitching to her relationships with the likes of Metro Station's Trace Cyrus being called into question and gossiped about. Or maybe it's just because she grew up and got tired of all the peripheral bullshit that seemed to tag along with her desire to just talk about her interests. Either way, her exposure to all the public pressure surrounding intensely personal moments — like her first serious break up with Boys Like Girls' Martin Johnson — proved to be a trigger for much darker things.

"It was my first relationship ever. I didn't know how to act. I was awkward," Hanna says. "I'd been bullied my entire life, dealing with all these fucking crazy things. I never knew how to deal with my feelings growing up, so I would turn to other ways. I would always hurt myself instead of feeling feelings. I'd rather cut it out with other things, so I've dealt with different addictions."

It's a topic we don't delve into further, but at the same time, I wonder whether or not it was difficult for her to hang out around all the men ostensibly plying her with compliments and Coors Lights. After all, in the past decade, ample discourse surrounding the dynamics of the Myspace emo scene has emerged, with many arguing that it had a large hand in objectifying women who — more often than not — were presented as siren-like concepts, as Jessica Hopper pointed out in her 2003 essay "Where the Girls Aren't." Other former Myspace scene queens, like Kiki Kannibal, have also spoken out about the rampant amount of sexual abuse and harassment they faced at the hands of many emo lynchpins.

For Hanna though, she says that wasn't really her biggest problem — citing "the little bit of power" she had thanks to her social media presence. And though she admits it's hard to definitively say what contributed to this, Hanna does hint at how she may have been preoccupied with less-than-ideal relationships behind closed doors.

"I've been in horrible relationship situations where I've been really badly mistreated, I've been verbally abused, mentally, all of that," she says. "I would let guy's opinions dictate how I felt a lot."

Added to the hoopla any headline about her break ups or hook ups would make on LiveJournal, Hanna has since learned to shy away from posting about her personal life, instead opting to focus on beauty-related business via her Instagram. Despite all of this though, Hanna still wouldn't change a single thing about her trajectory — after all, as she puts it, Myspace was what helped her find "purpose" during those pivotal teenage years.

"I didn't understand like what I was going to do in life, because I was just like, 'What the fuck is going on?'" she says, explaining that the ability to connect with others outside the bubble she was born into was a life-affirming experience.

"I went from being a loser wearing a back brace with no friends and being bullied to an internet person."

"I went from being a loser wearing a back brace with no friends and being bullied to an internet person," Hanna pauses for a moment, taking stock of it all. "It was just hard for me to wrap my head around everything I guess."

And because of this, Hanna prefers to look at the positive. To her, it's much more useful to encourage all the young women following her to delve into their passions and channel their energy toward the endeavors that matter to them. Much like what she did with fashion — something she says "saved her life."

"I felt inspired by something and then that kind of turned into my whole thing," she says, a hint of wistfulness coloring her voice. "And kids were like, 'Oh yeah, I feel the same way, too,' and that gave me something to live for."