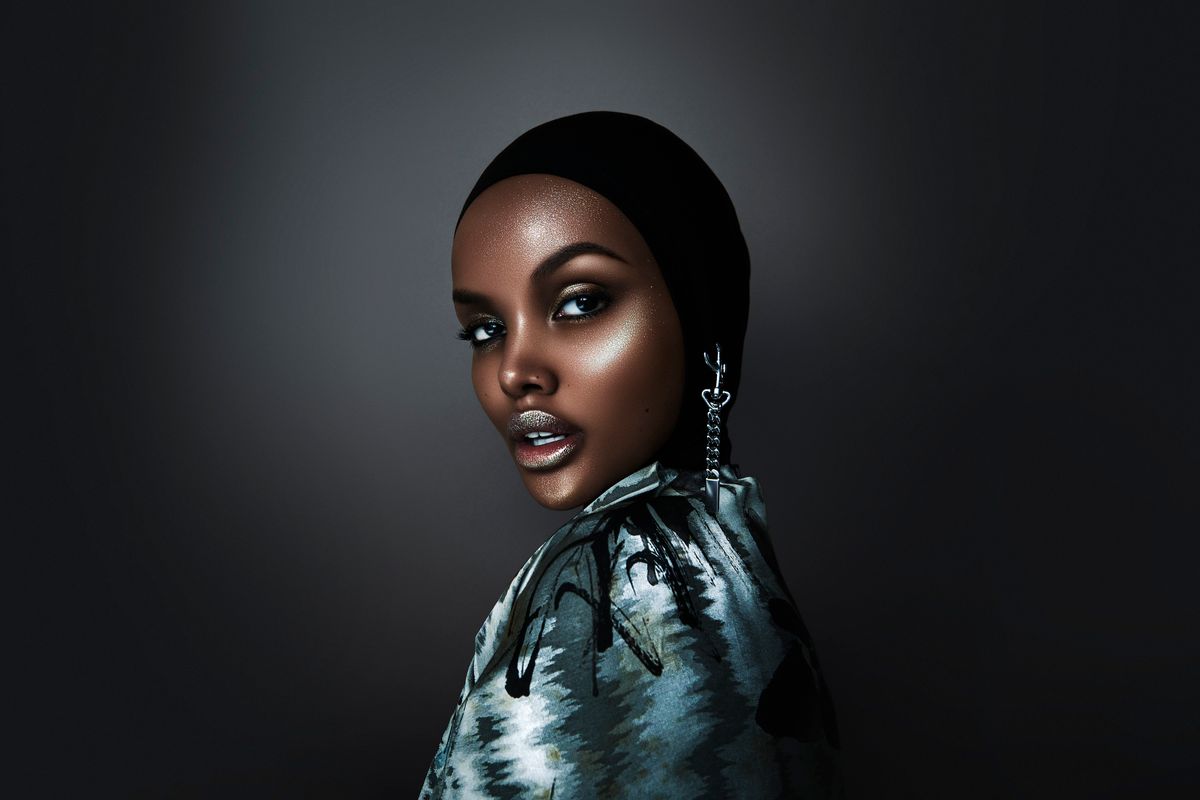 Halima Wants the Next Generation to Dream Big

Halima Aden recommends two staples for women who practice modest fashion: a nude-toned hijab and a turtleneck. "You know how you need a good nude shoe? You need a good nude hijab," the model says. She's animated, offering up a ready laugh. We're chatting in a restaurant in a Minneapolis suburb about 20 minutes away from the city center, equidistant to where we both grew up. I arrived late but thankfully Halima was later. "You know, Somali time," she said as she walked in, instantly recognizing that we're both Somali, a common occurrence in Minnesota, which has the largest population of Somalis in the country and recently elected America's first Somali-American congressperson, Ilhan Omar.

Aden was born in the massive Kakuma refugee camp in Kenya to Somali parents who had fled the country during its periods of instability. The family moved to Missouri when Aden was 7 before eventually settling in St. Cloud, Minnesota. At 19, she competed in the 2016 Miss Minnesota USA Pageant, where she was the first contestant to wear a hijab as well as a burkini in the swimsuit portion. Footage of Aden in the pageant circulated around the Internet and got picked up by outlets like the Today Show and USA Today, leading to her becoming the first-ever hijabi to land a major modeling contract (with IMG).

In February 2017, she added a new thread to the fashion industry's story with her catwalk debut at Kanye West's Yeezy Season 5 presentation — a moment so groundbreaking it felt unreal. The organic excitement over Aden's runway appearance also felt rare in such an oversaturated, manufactured market. She went on to appear on the covers of publications like Allure and British Vogue, cementing her status as the new face of modest fashion, which has historically been associated with light-skinned or non-black Arab women.

But even as her star rose within the fashion industry, Aden remained committed to her roots, staying in Minnesota rather than relocating to the industry epicenters of New York City, Paris or Milan. What those who might dismiss "flyover country" fail to understand about the Midwest and the marginalized people who live there is the love so many residents have for the cities they live in. As Aden explains, your background doesn't matter in these places — communities of Somalis and non-Somalis alike are committed to helping their neighbors, especially when they're new to the area. "People that I did not share a faith with, that did not come from the same background as me, were the ones that raised me," Aden says. "It wasn't always Somali people; in fact, Somali people needed help just like my family."

"I'm focused on the next big generation [...] What can I do to encourage girls to dream big?"

Now that she's found success in fashion, Aden wants to pay it forward. "I want to be known for encouraging other girls to go out and have their own success stories," she says. "I'm focused on the next generation. I want to one day see a hijabi at the Met Gala. I want to see a hijabi being a lead actress. Think of all the many firsts that are still out there. What can I do to encourage girls to dream big, to bring it home?" Last year she became a UNICEF ambassador, a position through which she advocates for migrants and refugees. She returned to her birthplace — Kakuma — with UNICEF to deliver a TEDx Talk (the first ever to take place inside a refugee camp) where she shared her story and once more stressed the value of connecting with, and learning from, those with different backgrounds.

Aden currently balances her humanitarian work with walking fashion week runways and shooting editorials for the likes of CR Fashion Book, British Glamour and, now, PAPER. It's this pairing that Aden says she wants to be known for: "combining the fun stuff with the stuff that really matters — fashion with advocacy." For someone who has already been able to elegantly merge what once were largely separate domains — fashion and faith, pageants and modesty — there's little doubt that her work in both arenas is poised to create a unique and lasting legacy.