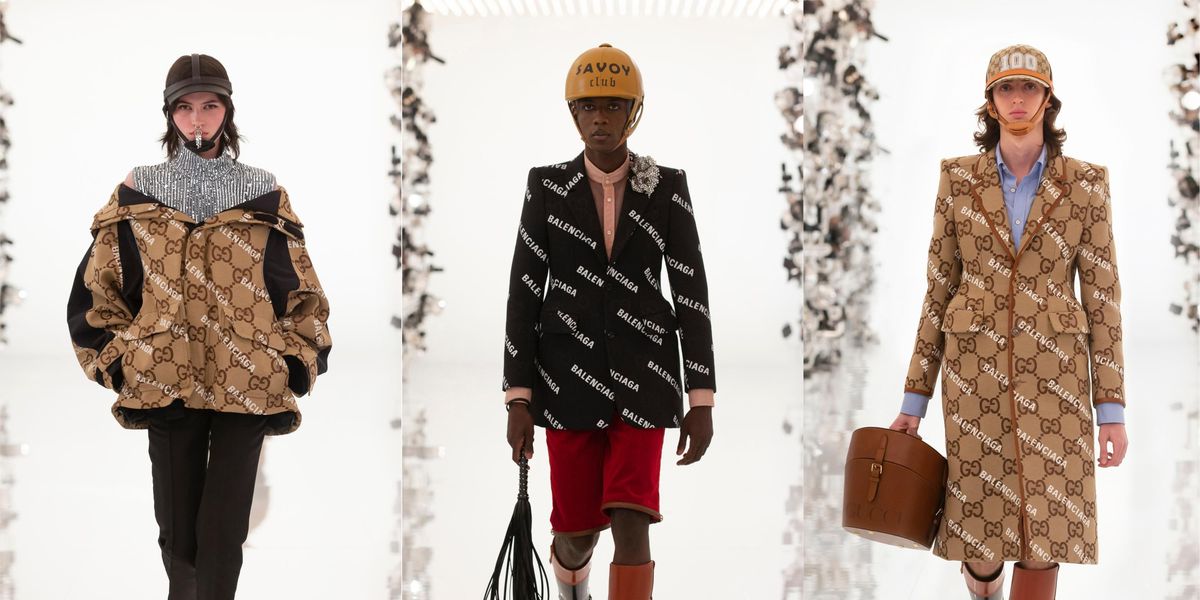 Gucci's first runway show since December's fashion film featuring Harry Styles took place earlier this morning, and all anyone could talk about was the Balenciaga looks. Sure, there were fun moments like the nod to Tom Ford's time at the house, as well as a harness that depicted its signature horsebit motif, but seeing the Gucci and Balenciaga logos together made for some of the most buzzy moments of the show.

Related | Gucci Is Going Against the Traditional Fashion Calendar

Both fashion houses are owned by luxury conglomerate Kering, but Gucci's press team points out that this is should not be referred to as a "collaboration"—rather, this is part of Alessandro Michele's vision of a "hacking lab" where he experiments and "hacks" a selection of Demna Gvasalia's Balenciaga designs for the Aria collection. Indeed, not only are their monograms combined together, but Gvasalia's hourglass silhouettes and signature branding elements are deeply embedded throughout.

The brand is celebrating their 100th anniversary this year, so they included more references to the brand's history as well, including looks that featured London's Savoy Hotel logo (founder Guccio Gucci worked there as a bellhop before starting Gucci as a luggage brand) as well as the aforementioned red velvet suit.

For the first time, pieces from Gucci's high jewelry collection, called Hortus Deliciarum, were shown on the runway, including crystal-covered hearts and gold embellished brooches. In the show notes, Michele called the collection a "deep and ecstatic diving in everything we yearningly miss today ... a jubilee of breath."

Italian-Canadian screenwriter and artist (and go-to Michele collaborator) Floria Sigismondi directed the film, which culminated with a scene resembling a mythical forest complete with white horses and beams of light. The runway portion, meanwhile, featured hundreds of cameras affixed around the walls not unlike Prada's debut Raf Simons show.

On Gucci's Instagram Stories, Gvasalia and Michele had a chat about the show, which the Gucci creative director said was a look back at the history of the brand, particularly the '90s which he loved while calling Tom Ford a genius. Equestrian references, plus some touches of fetish and kink (whips and leather abounded) were about as maximalist as this collection got compared to past seasons, with the focus more on silhouette this time around.

See the full runway show in the video, below.