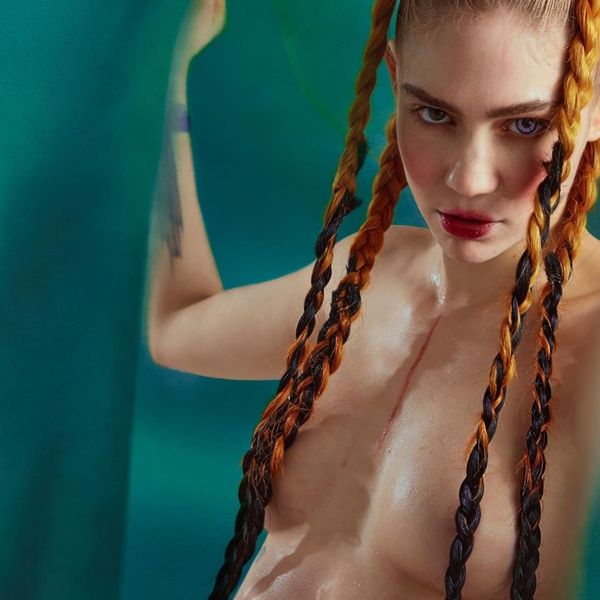 Well, we almost made it eight days into 2020 before we were forced to grapple with the ramifications of Grimes' pregnancy but this week of ignorant bliss is now over and the time has come for us to face some harsh realities and uncomfortable truths.

The Art Angels musician dropped the bombshell news late this afternoon, posting a photo of herself topless with an image of a baby superimposed over what appears to be a visibly pregnant belly. Given Grimes' track record, for a few moments it was entirely plausible to dismiss the photo as being some weird form of promotion for her upcoming album, MISS ANTHROPOCENE, which is slated to drop February 21st but that period of denial would too come to a swift end.

Grimes confirmed in the comments of her post that she was in fact pregnant, describing the experience of being knocked up as "a feral and war-like state of being." From their the conversation quickly shifted from speculation to coming to terms with the fact that Grimes and boyfriend, Elon Musk, had conceived a child together.

Since they first publicly stepped out at the Met Gala in 2018, there has been very little that made sense about Grimes and Elon Musk as couple. (Even Grimes couldn't explain why she was dating the Tesla billionaire.) Since then things have only gotten progressively stranger from the whole Azaelia Banks saga to Grimes' claims of having had experimental eye surgery and changing her name to the scientific value for light, c, by the time she rolled up to her Art Basel rave BIO-HAQUE in one of the new, very breakable Tesla trucks it felt like we had practically become numb to the cognitive dissonance of their relationship but here we are again.

Putting the concept of Grimes and Elon Musk fucking aside in a mental box marked "DO NOT OPEN UNDER ANY CIRCUMSTANCES," the idea of the pair's welcoming their offspring into the world is already more than enough to launch a new genre of fanfic on AO3. (It's almost a given that their child is going to be gene-spliced into an oblivion but we'll cross that ethically grey bridge when we get to it.) Suffice to say, the news sent the internet spiraling: