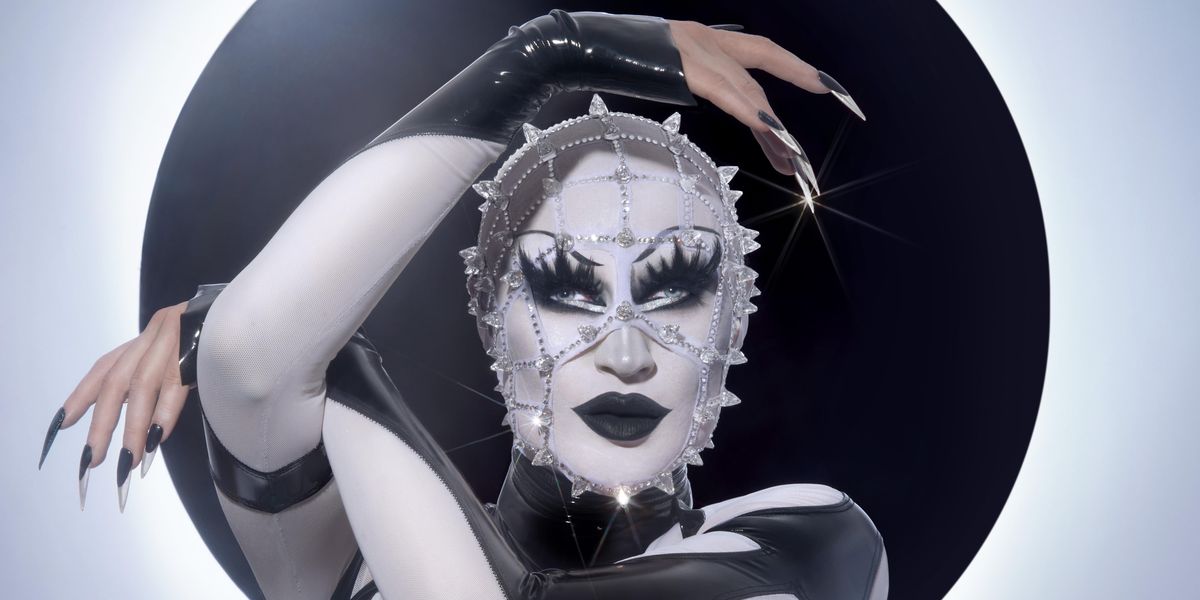 It's both cumbersome and cruel to remember a time when Kade Gottlieb AKA Gottmik wasn't a global superstar, so let's not. One of the few joys of sheltering in place for the greater part of the last year was getting to watch Gottmik serve up her signature brand of drag excellence each week on the 13th season of RuPaul's Drag Race. Even before turning heads on the competition, Mik was making herstory as the first out transgender man to compete on the long-running series.

"Time to crash the cis-tem," she said upon her entrance (Gottmik uses she/her pronouns when in drag). Already a seasoned make-up artist, having painted Cindy Crawford, Paris Hilton and Kaia Gerber, many expected Gottmik would be a lewk queen. But she turned it out in just about every aspect of the competition, most notably winning this season's Snatch Game for her performance as Paris Hilton.

Mik was knocked out during the semi-finals of the finale during a lip sync against Symone, but that's but a blip in the radar of everything she won just by competing in the competition, including making some friends for life and developing a fanbase in the millions (yes, millions). That includes a following of young trans kids who can see themselves in Kade, his journey to self-acceptance and the message of being true to who you are no matter what anyone says, especially not because of what anyone says.

Gottmik! Hi gorge! The Cock Destroyers are no more. Are you okay? I'm devastated.

Hi gorge! Oh my god I saw Sophie post about that so casually and I still don't believe it. Not the end of an era so abruptly. I need a warning!

Same. It's going to take some time for us all to heal. How does it feel to have crashed the cis-tem?

The cis-tem isn't fully crashed yet, but I am so proud of what I have done so far to stand up for my community and fight the patriarchy. There's a long way to go though, so we have to keep this momentum going.

Kade, as in Cade Maddox? Just making sure.

I may or may not have been watching his artistry online when the name clicked. Who knows!

Do you remember the first drag artist you saw that made you think "I can do that."

The first drag artist I ever saw was Rhea Litre at Phoenix Pride when I was 16. Seeing drag for the first time felt like my whole world clicked. I literally started practicing my drag makeup the second I got home and here we are.

Here we are! When was the last time you had one of those deep, belly laughs? And what was it that made you laugh?

Girl, I'm on tour with Vanjie right now and I have never laughed harder in my life. We are the most chaotic duo you will ever see, and I'm obsessed. They literally cut the microphones last night because we were still screaming into them from backstage.

What is the food that you could whip up to impress us all?

I truly can't cook to save my life, but I'd probably make some random not-hard foods like macaroni and cheese and avocado toast and turn it with the presentation so you don't notice.

Related | What Took 'Vogue' So Long to Give Drag Queens a Cover?

A feast… for the eyes! How did the pandemic change your outlook on life?

The pandemic definitely made me so much more grateful for everything positive happening in my life right now. I stop and take it all in and thank the universe every chance I get.

What's your best season 13 look? I think it's the Little Black Dress, FWIW.

The LBD is definitely one of my favorite looks. I was so proud to be able to go out on the main stage fully naked showing my full body top surgery scars and all. I also am so proud of every single one of my finale looks. Every look is a look inside of my brain and really was the most Gottmik artistry I have ever served!

What's been going down in your DMs?

My DMs are seriously wild, but my favorite thing is all of the people that share their stories about their gender or sexuality journeys and how I have helped them figure it out in some way. I've always wanted to see someone like me on TV, so seeing myself be that for so many other people is just mind blowing.

What celeb's mug would you most like the chance to beat?

Season six is my favorite because it's just chaos from start to finish and you know I'm a chaotic person, so I live. I also live for how absolutely stacked the cast of season seven was. The casting department really just put all the dolls together and said, "Let's fucking go."

Favorite song (besides "Lucky") to come out of Drag Race?

"Read U Wrote U" you still to this day gets me good when it plays. I'll fully be trying to leave a party and it'll come on and the next thing you know I'm standing on a table screaming, "I'm Roxxxy Andrews and I'm here to make it CLEAR!"

Tell me more about your time at Fashion Institute of Design and Merchandising. What first got you interested in fashion and what did you want to pursue while in school?

I have always been obsessed with fashion. I started out drawing and painting, so when I would design a look, it felt like my art was coming to life. I always saw myself living in LA, so when I found FIDM it was almost like I didn't need to look at any other school. Although I went with the intent to design, I had such an open mind and trusted wherever the universe was going to take me, and somehow while I was there my makeup career took off without me even really wanting to go in that direction. Thank God for that!

Who is your favorite up-and-coming fashion designer?

I'm not sure if he's considered up-and-coming because he's been inspiring me and my art since I was in high school, but Marco Marco is such an amazing designer that I'm so grateful to not only work with, but have in my life as a friend!

Who is your go-to pop diva?

I feel like Kylie Minogue and Lady Gaga are my go-to pop divas. I seriously have Disco and Chromatica on loop always.

What is your pop culture guilty pleasure?

I don't know if this is necessarily pop culture, but one of my main guilty pleasures is watching The Greatest Showman.

I can't help it! Sorry gorge, I live.

Who is one drag performer everyone needs to get privy to stat?

She is one of my favorite drag performers of all time and has been so supportive of me and my drag career since the day we met. She's an icon and we all stan Sasha.

Any advice or encouragement for trans youth reading headlines from p*liticians seeking to invalidate their humanity?

My advice for trans youth right now would be to try your hardest to find a balance of ignoring the hate and still staying educated. Even if it hurts, we need to know what's going on so we can stand strong together and grow as a community. No matter how hard it seems right now, we are going to get through this, because we aren't going anywhere and every day that goes by we are stronger and louder than before. I love you and I stand with you!