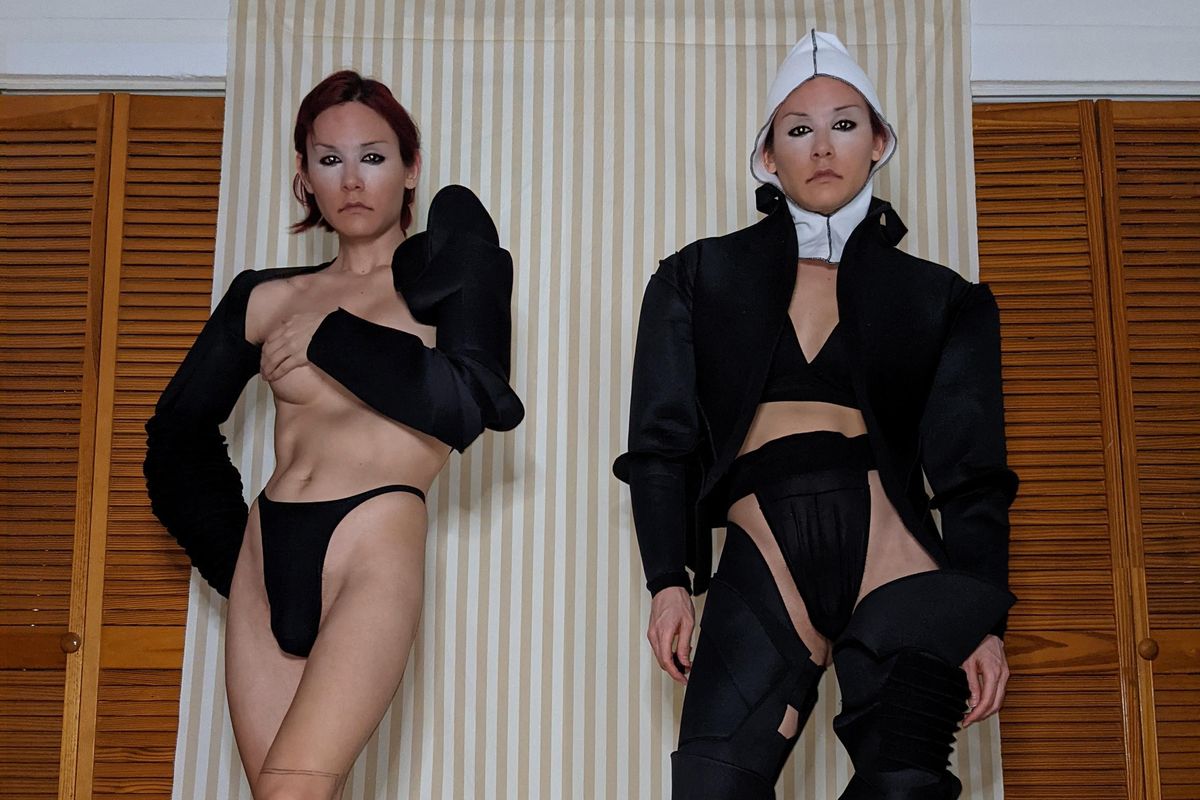 At the start of this year, Gogo Graham uploaded an Instagram post asking whether she should start a menswear line, prompting an overwhelming response of "yes" from her followers intrigued by the prospect. ("I'm just calling it that, clothing doesn't have gender, everyone can wear what they want!" she later assured one user in the comments.)

After the release of her Spring 2021 collection, "Curse The Ill Fortune That Led You To Me," which was inspired by the crux between her job at OnlyFans and the video game Soulcalibur, Graham needed a departure from her main fashion line. Designing clothes for sex work that were inspired by video game armor required a heavy amount of precision. As much as she enjoyed designing her mainline pieces and accessories, the amount of time and resources that went into production was costly and sometimes proved challenging to sell.

She soon began thinking about the men and masculine people in her life who've supported her work since its inception, which has long been known for prioritizing and celebrating trans femininity in the world of fashion. But the thought of transfeminine people being the primary source of her design income compelled to initiate change. "I actually think men should be the ones supporting my work financially," Graham says.

The result is the launch of FAGGOT, her first foray into menswear that coincides with the debut of her Fall 2021 collection "Sissies Pay Me to Tell Them What to Wear," a fantasy of what Graham herself wants men and other masculine people to wear. (She models the collection throughout in the lookbook.) It's medieval-meets-samurai, squire-meets-court-jester, mainly inspired by the Renaissance festivals wherein men dress as knights and squires.

"Submissive men like to be told what to wear," Graham says. "It's exciting for them to experiment with gender and not feel shame about it." Still, the shame is still very much prevalent in straight men's relationships with the trans women they desire — Graham included. "A lot of men are afraid to date [trans women]," she acknowledges. "So a lot of their interactions with the community are through sex work."

Indeed, men dressing in women's underwear is symbolic of the many secrets straight men keep private; a yearning worn in discretion, like a pair of panties underneath layers of clothing. If you protect yourself well enough, nobody will say you're a "faggot." But the derogatory term does not discriminate against gender; even cis, straight men can be called a "faggot," be it as trivial as their choice of shampoo or as grave as their choice of women. The difference is that "material objects don't possess gender," Graham says. "People do."

The release of FAGGOT and its debut collection "Sissies Pay Me to Tell Them What to Wear" is Graham's way of meeting men where they are. "Psychologically, it seems as though [the term] 'menswear' is a permission for men to feel like they have access to clothing, in spite of the fact that clothing has no gender and has always been accessible," she says.

Although a menswear line is new for Graham, it's also a way to engage her two audiences — trans women, nonbinary people and queer men from her mainline; and cis, straight men from Onlyfans — under a new umbrella. Ultimately, this collection is a sanction and invitation to venture out of the artificial etiquette of gender performance, something the designer has long championed and will continue to do.