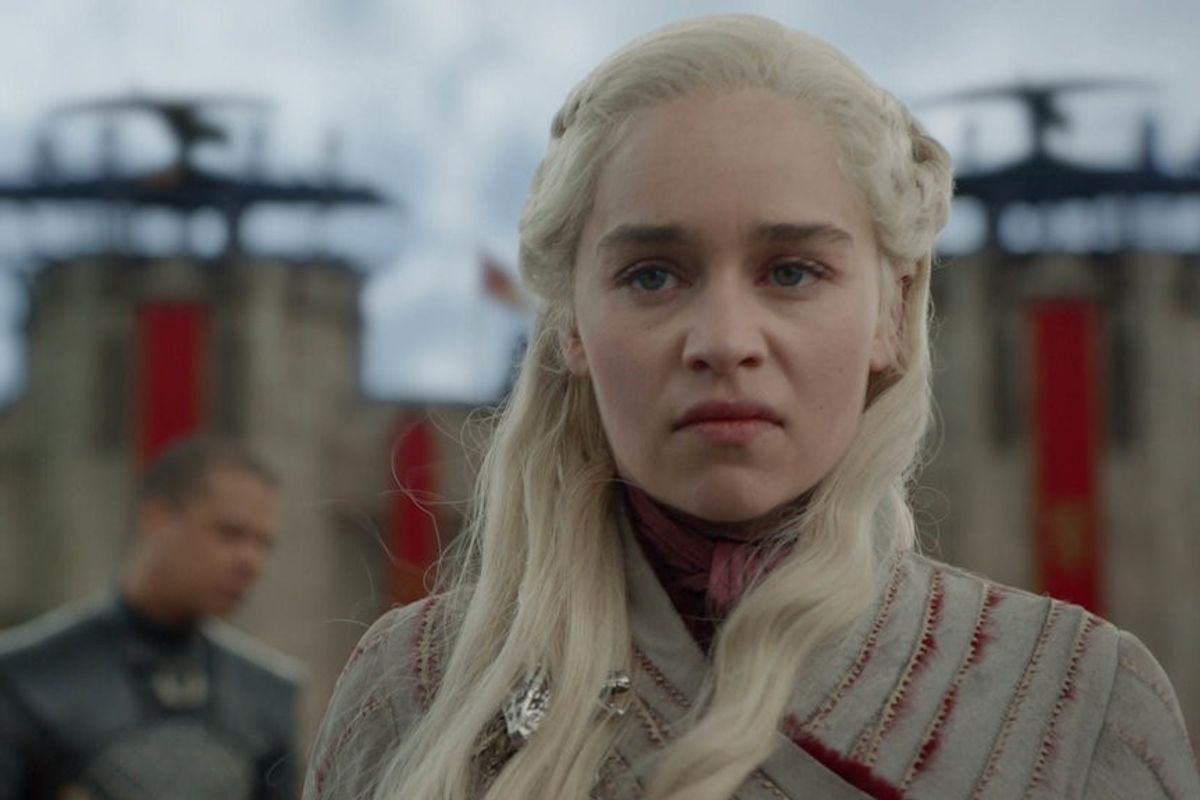 Game of Thrones Episode 4: The Episode of Realizing Things

To paraphrase Kylie Jenner: every episode has a new energy, and this episode was really about just realizing things. This episode was a much needed come down after the Battle of Winterfell, and a lot of our favorite and least favorite characters just kind of realized stuff. Here's what they realized:

Daenerys realizes that no one in The North likes her. It's almost sad to see her life's work becoming so unattainable for her. In her defense, she donated her army, her dragons, and her side piece (Ser Jorah) to save the damn North. Yet, after the dust settled, it becomes clear that The North is still cold to her. She also realizes that she should try being clever again, and not just resorting to dragonfire to make her point. Example: he promotes Gendry Rivers from humble bastard to Gendry Baratheon, Lord of Storms End. She does this knowing that Gendry (even though he never would) might pose a tiny threat to her dream job of ruling the world.

Danny also realizes, for what should be the 100th time at this point, that contrary to what she may think, her dragons are not fucking indestructible. In fact, when they're not breathing fire, they're just massive flying targets.

Jon realizes, or I guess remembers, that it is not normal to fuck your aunt. The bar is in Hell.

I honestly don't know what Jaime has realized. As soon as he hears of the impending battle between his sister-lover and the ragtag crew from The North, he rides off to get involved. Maybe he realizes that no matter what, he will always worship Cersei, or maybe he realizes that it's only right for him to die in his hometown.

Brienne had to realize (the hard way) that men ain't shit. After the writers for some reason decided to defy the natural laws of right and wrong and have Brienne and fucking Jaime get together, the Kingslayer takes off for King's Landing to return to Cersei. Brienne is left in tears and honestly I'm hurt for her.

It is implied that Sansa and Arya realize that Jon Stark is actually Aegon Targaryen, a hot piece of gossip that honestly is starting to get boring. We don't see their immediate reactions, but it's clear it moves them to act. Arya rides with the Hound to King's Landing with no plans to return, which I refuse to even acknowledge because sorry Arya, you are not allowed to die. Sansa reacts diplomatically. Like a Real Housewife pitted between two friends, looks like she's going to keep Jon's secret because he asked her too, but not with a smile.

Varys and Tyrion, like everyone watching at home, realize that perhaps Daenerys really isn't cut out for the job of ruling the Seven Kingdoms. After failing to convince Daenerys not to burn King's Landing and all its innocent citizens to the ground, they also begin to realize that perhaps Jon should sit on the Iron Throne. On paper, great decision. He's noble and wise and blah blah blah, but not wanting to sit on the throne could, in fact, prove to be an issue.

First of all, it's really good to see Cersei again. I've missed her energy, and she looks amazing in this red "I Rule the Fucking World" dress she has on. Anyway, she realizes that she's the only person on this show with the critical thinking and ruthlessness required to run the world.

Bronn realizes that the bottom line is a dollar sign. Oh wait, he's always known that.

Ghost, like Brienne, realizes that men ain't shit and that he's better off without Jon, anyway.

Honorable mention: Tormund Giantsbane and Samwell Tarly realize that they're over this shit and they're going home.

First and foremost, I realized that I am an idiot. I didn't know this, but right before watching this episode I seem to have put my clown wig on! And shoes and makeup to match! My dumbass really though Missandei and Grey Worm were going to live happily ever after and go on to start a Westeros chapter of the NAACP. Imagine my shock when that did not happen! Cersei, who I used to love and now hate, ordered Missandei's beheading. All for what? To push Daenerys to madness? Daenerys is mad already! She didn't need a push. I swear if the only other Black person on this show doesn't make it I will never forgive the two white men who control this show. If anything happens to Grey Worm — who admittedly has nothing left to live for — I say we start a class action civil rights lawsuit.

I also realized: not a single living Stark child has any personality. It's easy to think that just includes Weird Bran, who survived the Battle of Winterfell without a scratch on him while doing nothing. But think about it: Jon only ever goes on about honor and honesty. Sansa has some kick to her, but is so deadpan about everything. Arya is still That Bitch but, even then, would you describe her as funny? She's cunning, intelligent, strong, and again, That Bitch, but not much more. Of course they're a family suffering what I imagine is an extreme case of PTSD so I give them credit for even being verbal at this point, but as the old political saying goes, I wouldn't want to get a beer with any of them.

And the last thing I realized is: Winterfell should not have that much wine. After the White Walker army is defeated and a funeral is held for all of those who died fighting, the survivors enjoy getting drunk, especially Tormund. How is there possibly this much wine in Winterfell? Even if, say, 80% of the population perished during the Battle of Winterfell, how could there still be this much wine? They were just rationing out food — mostly soup — a couple days ago. Where would Winterfell even get wine? What is trade and commerce system in Westeros? This is essentially a World War so I don't see trade prospering. I digress, but Winterfell definitely shouldn't have that much wine.

And with that, episode four is over. There are only two episodes left. Episode five, thankfully, already looks like it's going to have more action than this. I hope we'll get to see the deaths we all wanted to see happen back in episode three. I'll be watching, but mostly to make sure Grey Worm isn't the victim of a hate crime.