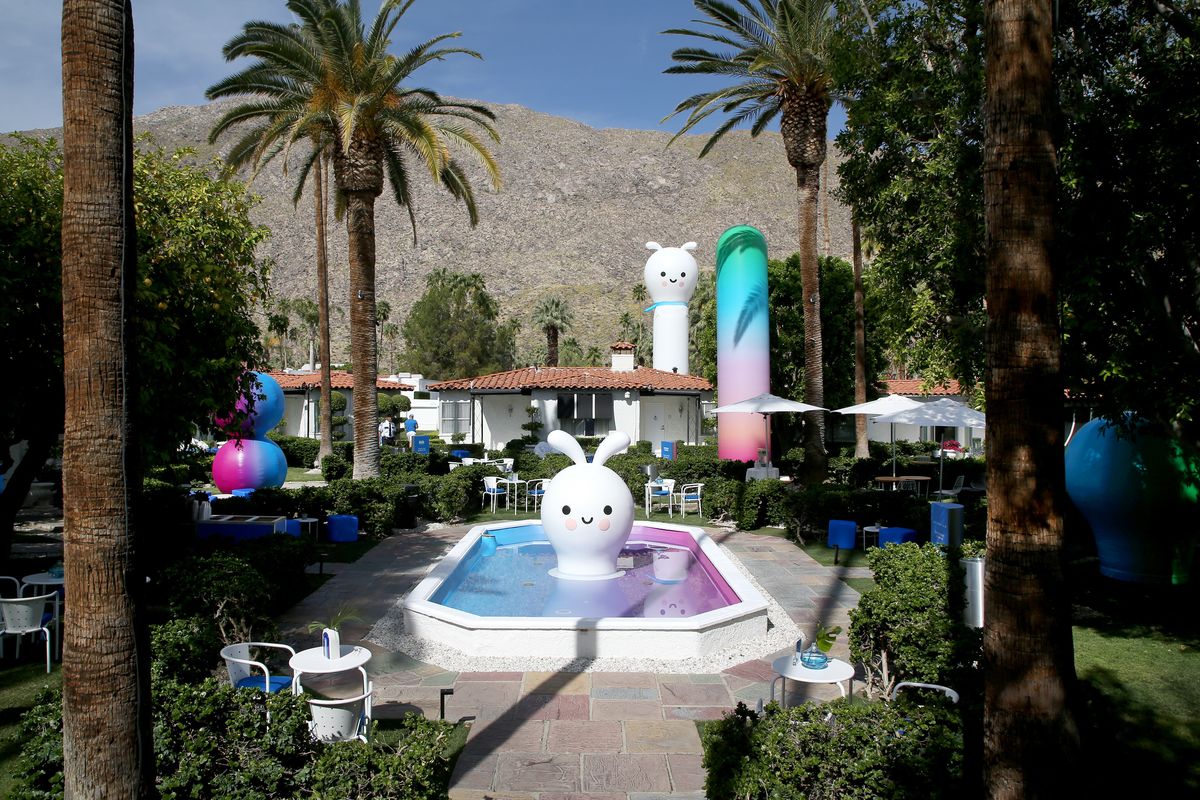 Friends With You Brought Childlike Optimism to Coachella

Coachella can easily be an extreme experience, only heightened by the chance that your shower could start on fire should you so choose to camp on-site. For American Express card members, however, this year's festival was unforgettably cushy, complete with dynamic activations across the California desert that made for a memorable time.

The American Express Card Member Lounge inside the festival grounds offered complimentary nails from celebrity nail artist Britney Tokyo, the go-to for everyone from Cardi B to Kim Kardashian. (She told me she'd once been called to a hospital to do the nails of an anonymous celebrity right after they'd given birth). The Lounge also sold exclusive Ariana Grande merch, which expectedly cleared out, and vital sneaker cleaning from expert Jason Markk.

In Palm Springs, the American Express Platinum House returned this year as a spot for festival goers to relax and revive themselves in the EQX Body Lab (cryo-facials, CBD massages, targeted acupuncture). For the more adventurous, assless chaps-wearing Coachella attendee, there were also signature cocktails and a lineup of all-star DJs (Republic Record's Metro Boomin' was a highlight).

In-between sipping Matcha cocktails and pretending Coachella Life was Real Life, I sat down with Friends With You to talk about engaging the next generation, designing for a more optimistic future, and creating J Balvin's technicolor Coachella set.

Why do you think your work resonates with events like this?

Samuel Albert Borkson: We're constantly trying to make an earnest attempt to connect and give people a break from the crazy shit we deal with all the time. How do we put a tiny bit of magic into the world — into this environment? Because that's kind of our backgrounds, just really embellishing these communal experiences. That's really what we grew our practice from. Now there's a lot more that we do, from pre-school shows, where we teach kids to love the world, to selling fine artwork. But really it all comes back to the idea of trying to make people feel a little bit better in this world — a little more positivity and love.

"Why are we still so against each other? It's all control, greed, and politics. [Arturo and I] don't believe in that."

Is the childlike energy of your work intentional?

Arturo Sandoval: I think it's intentional in the sense that [as an adult], you have to become stringent and hard to be able to deal with the world — you have to become rigid to face the world. I think that more and more in modern times, and this is widespread, we are more childlike because we're being held more. But it's also viewed as immature to be childlike. The whimsy of being childlike is not about being unstructured or not hard enough; I think to be childlike is to be flexible — to find yourself not locked into one storyline. Maturity is about sharing your ego and being like, This is the person I created. This is what I want to put into the world. A kid's mentality is when you're a little looser with that and still forming. We're trying to share symbolism that shows you can't take yourself so seriously, and hopefully something seeps out that's outside of your preconceived notion of who you are. That's where the magic is anyway — just relax, and let it come out.

Samuel: It's also this idea of our country being so adversarial. You don't know now by knowing me, but I fought almost every day in my life where I grew up. It was painful, I didn't want to be that person. I don't feel anybody wants to be in that pain. So we're gonna be so sweet [with our art], and I feel that resonates more and more. People do want to be kind, be loving, be cute. We don't want to be hurt and angry and pissed anymore, it's so exhausting.

That energy exists everywhere as it is.

Arturo: It'a actually easier to rattle us into aggression — easier to rattle people into a stance like, This is my court, you stay over there. [Being childlike] is the antithesis of that. It's the complete 180 of what we're trying to fight, which is people being like, This is who I am. This is America. No, we're still figuring it out, just relax everyone.

Samuel: Why are we still so against each other? It's all control, greed, and politics. [Arturo and I] don't believe in that. That's why we don't even fuck with the Trump shit, that is just the poison symptom of the last generation's bullshit. We have to come heavy and work like motherfuckers to be this loving force in the world, and no artist has done before across mediums like through TV — propaganda to children and their minds, spreading love. We have to come so fucking hard at our shit with us, our friends and other artists next to us and coming up under us that we support and grow this new thing. We have to be responsible. The world is ours. We can't be pissed or upset anymore. Fuck that, do some shit. Make a loving thing, be nice, get into politics yourself. It's all of our responsibility now.

How do you think you're engaging with the next generation to create this change?

Samuel: The first preschool show we made turned into an accidental hit. It's called True and the Rainbow Kingdom. We're teaching love and empathy. Nobody did that in a preschool show before we did it. They're like, We teach ABC's and cognitive thinking, but we need to teach empathy, we need to teach that the world is alive, we need to teach animism — that everything has a soul. We're friends with young artists and we're talking to them about what they're thinking. I think they're very in line with creating a positive future. They're not haters of each other, and they respect us and talk to us. When we were younger, everyone was a hater. We wanted all our heroes to fall. I don't feel like that now; I don't want my heroes to fall.

Arturo: It's interesting to see the generational shift. That's one of the hardest things for us as we grow older — to be able to have that perspective; it's almost impossible because it's their reality. But we feel there is a general sense that, yeah we are changing and that's changing fast for the positive. We often talk about how the media has hijacked the stands of the time and made everything seem negative. If you're really on the ground, people in general are being nicer and trying harder. It cannot be understated how much we've shifted — the dialogue, the gender conversations, the rights of all super minorities. It's moving at a trillion miles an hour, we cannot even see it happening. It's so interesting to see how fast culture is moving towards a positive thing. The media is praying that the bad things will get us to click, but we're saying that's complete bullshit. We have to create those symbols that we can rally around.

"Everybody now is on their Instagrams. [Andy] Warhol was right, but now we need to flip the script. You don't need to be egotistical."

Samuel: And we're just one of the artists doing it. The difference between [Andy] Warhol's Factory and us... I think they got so stuck in the idea of the ego. That's really where it all went. Everybody now is on their Instagrams. Warhol was right, but now we need to flip the script. You don't need to be egotistical. We can share. There's room, and there's so much art can do. It's not just like, Well that's my gallery, that's my collector. It doesn't have to be like that.

Arturo: I feel like the younger kids are less consumed by the Gram than even your generation is. Just from kids that I'm around and even younger, it's kind of old news already. They're already aware that IRL is what's up. They are so sensitive and get so hurt when they do share themselves out there [online] and don't get the feedback they want. It's brutal.

Samuel: My 12-year-old niece just went on Instagram and talked to my sister about exactly that thing. She's like, "It's not making me feel good, but I can't stop looking at it mom." And my sister's like, "I'm going to get off mine for the week and you're going to get off yours and we'll just see how that feels." They had fun, and they went back to it and now look at it differently. It can get dangerous and scary, and we don't know what we're doing with it. We're still figuring out all the new technology.

It's interesting because you're part of these IRL activations, but they're sort of designed for Instagrammable moments. How do you balance those two things?

Samuel: We were making these experiences before they became Instagrammable moments. The difference between us and Museum of Ice Cream-type things is that we really put soul and love into every direction, every space, every sculpture and idea. You can't just fake this shit. You can't just be a design firm that says, "I want to create this Instagrammable things," because it will only be that and it will have no soul. People will just get the picture, not experience the moment, and get five likes. We're coming at this from a very earnest, non-cynical, loving place to make a really impactful, important interaction — just make you feel a tiny bit of good inside. We don't know if it will change your life, and some experiences do impact people deeper. Our intention is to create a little bit of peace through your interactions with our work.

Arturo: You're not the first person to ask us that. Our art from the beginning, there's different levels of it. There is some art that you can't enjoy unless you have intellectual talent or a background to know what the thing is. We try to make our art accessible to everyone, and sometimes all people want is the selfie, and that's okay. We can't be held accountable just because that's the state of the world. We really want to make symbols that people can rally behind.

Samuel: We've been working for a while to create this traveling thing with [J Balvin], but it just so happens they wanted to speed it up and kick it off [at Coachella]. It's a full sensory experience that comes in and out of the graphics. We really went nuts with our world, which is cool — inflatable characters. We ended up just talking to him as friends, and he's bought fine art from us. He's such a good dude. He understands the message and wants to partner [with us] and be a good person and be loving and help the world. It's awesome, so that kind of collaboration only breeds real relationships.