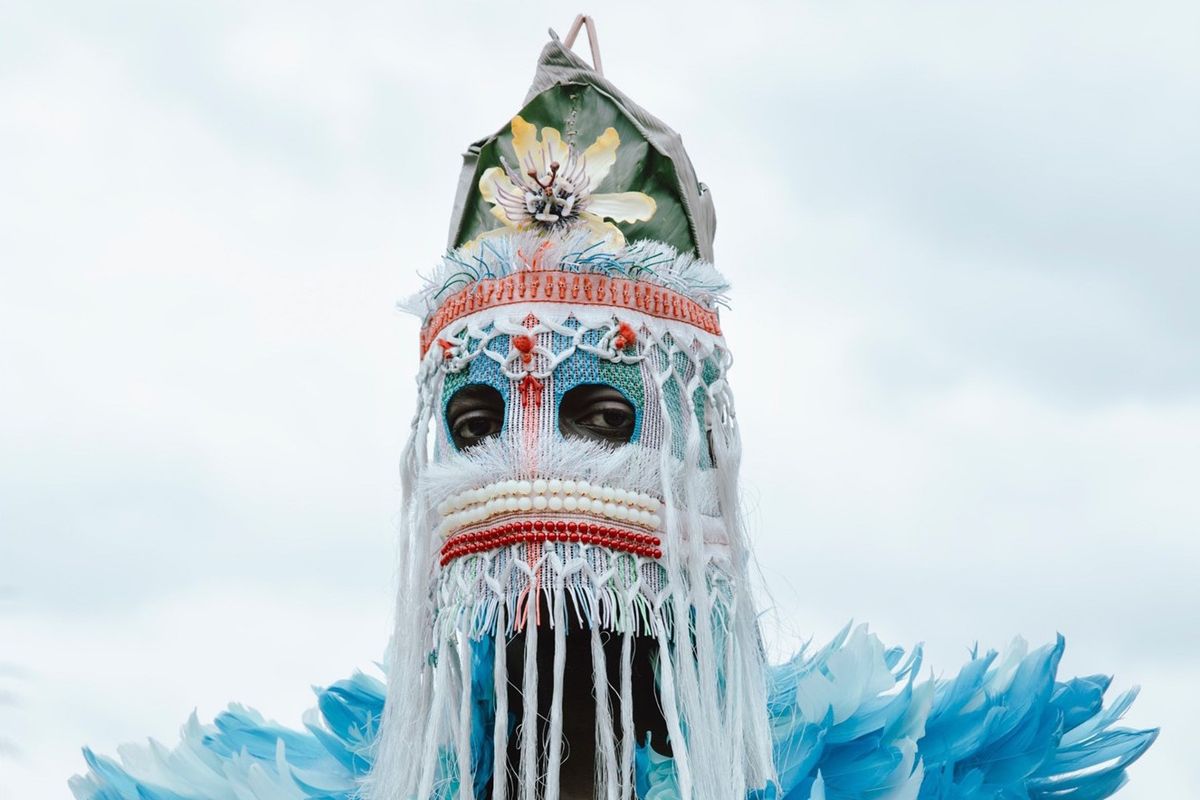 It brings me profound pleasure to kick off this week's series by saying we should all eat grandma before we begin. I can't with this band's name (in the best way), but Let's Eat Grandma — comprising British teens and childhood besties Jenny Hollingsworth and Rosa Walton, ages 18 and 19, respectively — have been making wonderfully weird pop since the release of their debut, 2016's darkly alluring I, Gemini. Upcoming sophomore effort I'm All Ears promises to be a reinvention tour for the dynamic duo, and "Falling Into Me" is an incredibly dreamy, daring first look. At almost six minutes, it sways to and fro like a demented prom anthem, full of cheesetastic, spaced-out synths, drum fills, and lyrics that harmlessly help set the mood, but as the track progresses, the bottom drops out and something really strange happens. "You got this" becomes a line the brings about a glitchy freakout that would make Grimes (and, maybe even grandma) proud.

David Guetta produces "Flames" and it honors all that Sia is well-known for at this point: inspiring but idiosyncratic lyrics, a to-the-rafters earwormy chorus, and sinewy vocal runs that if I tried to imitate I'd end up coughing mid-scale climb. It's all set to a beat that is vaguely 80s, vaguely tropical. Fans of Sia will grab right onto this, which doesn't reinvent or redefine her in any way. I know I'm describing something that doesn't seem remarkable, but Sia's really mastered the three-minute "if it ain't broke, don't fix it" pop-perfection formula. It's the toughest musical party trick hard to master, but she's got it, which is why "Flames" is worth your attention.

Beyoncé-endorsed sister singer duo and Grown-ish stars Chloe x Halle release their debut album, The Kids Are Alright today. So you already know that Bey wouldn't align herself with anything even remotely wack, and Chloe x Halle are anything but. (They also recently starred in Rodarte's latest Kirsten Dunst-fronted digital campaign, so there's that chicness too). But all that aside, the album is solid and promises to be a source of black excellence and empowerment for young women everywhere. "Happy Without Me" is a Joey Bada$-assisted trap&B standout, and it reminisces on good days gone by with a former lover who has found happiness with another. I'm obsessed with the sisters' jazz chanteuse vocals and the way heartbreak and warmth is captured simultaneously when they croon the word "bittersweeeeeet." I have a hard time teenagers can be this sophisticated about love, because when I was a teenager not soooo long ago, we all thought everyone had cooties. Obviously we are well past that now, and what a relief that is because Chloe x Halle are revelatory.

We featured KYLE on the inaugural Bops Only column, with his tripped-out "To the Moon," but who are we to deny a banger when we hear one? "Playinwitme" is a Kehlani-assisted jam about being toyed with in romance and how not cute that is. KYLE and Kehlani trade verses nicely and in a weird way, I'm reminded of the clever, saucy wordplay between Nelly Furtado and Timbaland in 2006's "Promiscuous." When a duet of any kind flows, it really flows, and it feels effortless. "Playinwitme" is the epitome of effortlessly rendered pop with R&B flourishes, and it manages to be pointed ("You don't even like girls," Kehlani hisses.) and adorable all at once.

What a cute song! My new favorite combo of emojis is the upside-down smiley-face and the knife emoji, which is probably a little scary to admit here, but MY POINT IS: "Kill Your Darlings," a breezy, wildly catchy new tune by Must Be Nice and Emelie Cyreus (no relation to Miley, thankyouverymuch) is the very embodiment of this subtly powerful emoji combo. No one sees cutesy-cray as a real threat until it is, and I think that's precisely what's special about this song.

Marian Hill is a Philly-based songwriting duo comprising producer Jeremy Lloyd and vocalist Samantha Gongol. The latest jam from their upcoming album Unusual, is a squelchy, slinky thing of quiet beauty. Gongol turns in an understated emotive performance with lyrics full of bite and shade: "Even if she sings like me/ Is a king like me / You'll be lost at sea," she sings. This tune doesn't readily reveal its beauty secrets, though. Multiple spins unlock a song full of Top 40 potential: there's that sick "Laffy Taffy"-esque bassline and a million different ways to rhyme the word "differently."

Here is a powerballad for the ages: a slow dance about the betrayal inherent in finding out the love of your life loves someone else. Ouch. Arkansan duo Joan brings the slow-burning heat on "I Loved You First," till it explodes into a guitar line that amps up the drama of such a scenario. Something about this track feels literary and studied, but not in a bad way. This song is about hetero people, but totally relatable content ~for all~. Think of how Elio felt at the end of "The Book Was Better" queer romance film Call Me By Your Name when he got that wack-ass phone call from Oliver talkin' bout how he was getting married. "I Loved You First" is pretty much that moment of reckoning. Yay!

Diplo's got a new EP out today, entitled California. "Color Blind" is the EP's standout single, featuring Lil Xan, who I've never heard of before, but apparently derives his moniker from Xanax. Seems apt, because I am enjoying the way his syrupy flow — a mix of singing and hip-hop swaggering — fits into Diplo's consistent arpeggio-lined space groove.

BLVK JVCK — you figure out how to pronounce it lol — is an LA rap and hip-hop production duo I've not heard of, but this came up on my list of songs to check out today and I couldn't help but click play when I saw Jessie Reyez was on the track. For those of you who loved her debut EP Kiddo, especially that screwed-up cautionary tale "Gatekeeper," this one is for you. She sounds both sweet and somehow menacing, which again, no one sees "cutesy-cray" as a real threat until it is.

Belgium emcee Baloji embraces Congotronic sound experiments with fullness and verve on new album 137 Avenue Kaniama. The whole thing is so sonically dense and enjoyable we included it below for your streaming pleasure. It deftly combines his knack of electronic sampling and the rich culture of his native Democratic Republic of Congo. A press release announcing the album includes this colorful bit about how the album got its name, which is lifted from the track "Inconnu a Cette Adresse": My mother's house was originally on Avenue Kaniama in the Katuba neighborhood of Lubumbashi. When I tried to meet her after 25 years, I couldn't find her house number. The street just got smaller and smaller, until it couldn't even be reached by car, so we thought it was a dead-end. But then I got out and started walking, and in the end I found her." Awwww.