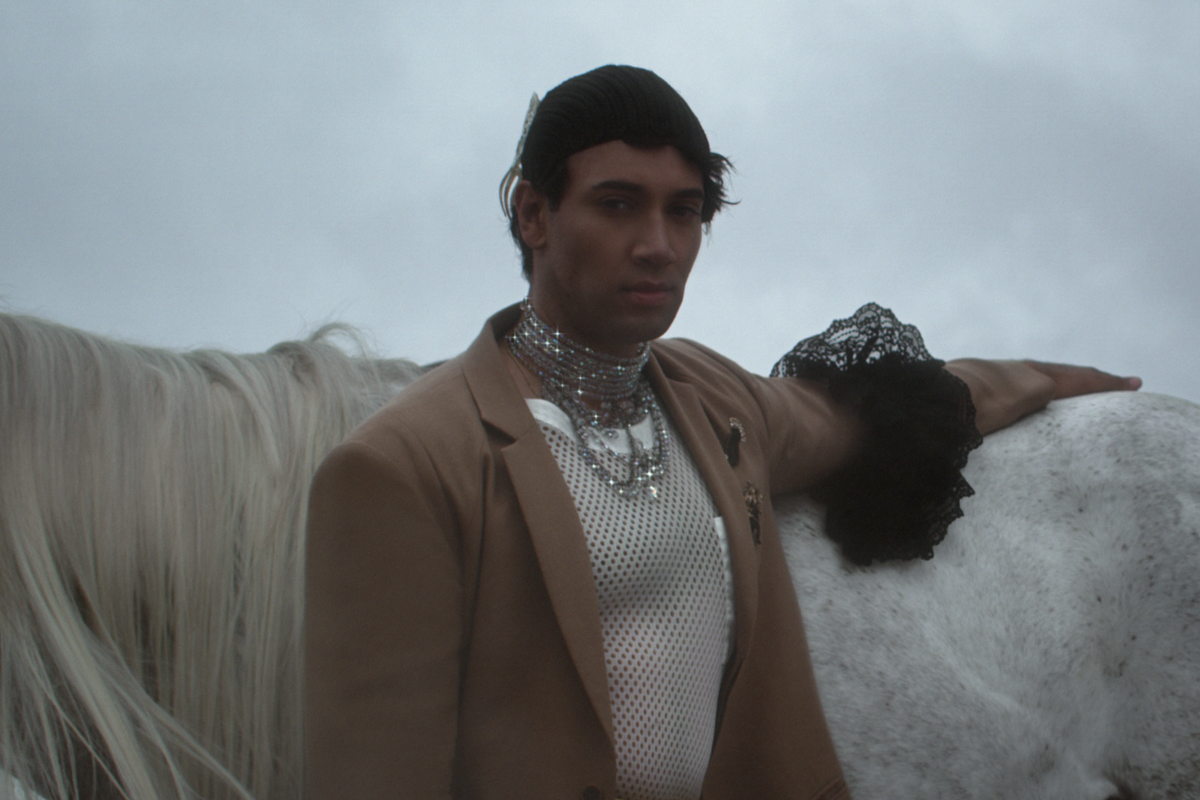 Sometimes you see a piece of art that transports you to the mystical corners of your own mind, and if you are already processing something difficult, what you see may provide a sense of tranquil relief.

It's hard to describe the beauty of "Fall Back," the video for the latest song by Los Angeles queer musician, Micah James, but alongside director Shahana Khan, serenity is exactly what you may come away with.

The video juxtaposes natural scenery with surreal imagery, creating a world both immersive and dreamlike. In the first few frames, James strokes the golden hair of a beautiful horse, before wandering the hills and ravines of his surroundings, seeing caped figures, apparently in search of a higher form of connection after losing someone (or something) meaningful to him. The song takes us on a similar journey. Using a familiar looped Maxwell via Kate Bush vocal moan, and the crash and swell of throbbing beats, dreamy harp and synths, and layered harmonies, James raps and sings — in a world-weary vocal quality that might remind listeners of pensive contemporaries like Drake — about love lost, grief, and the road back to oneself. The solitude of nature, then, is the perfect backdrop for this self-exploration, as sounds of rushing water and gentle breezes usher James forward.

"The video begins as the document of a strained relationship, and by the end of it we descend into nothingness, James tells PAPER, outlining the themes of "Fall Back." "Instead of the 7 Stages of Grief, imagine this as the 'Four Pillars of Breakup': you process; you then commit yourself to disbelief for a while; you eventually take stock, making the decision to be ok with everything, whether that's actually true or not; and lastly, you realize that the person you were is gone."

Khan notes that her collaboration with James was a seamless one, fueled by the energy present on set. "The relation between Micah and the environment continues to diverge, as he sashays through a field," she explains. "I felt the hills in the distance needed to be set ablaze to match Micah's strong performance. I digitally added fire to the scenes, and it felt like it was that thing you didn't know was missing until you saw it [...] The end presents a stark minimalism with Micah at its center; reborn from the ashes with a new found assurance."

Adding to the sense of peace emanating from the visuals is the presence of a mostly queer cast and crew consisting of Black and Brown people who love and respect one another and the ultimate vision for what "Fall Back" became.

James says that the creation of "Fall Back" can be a shining example of what inclusion should always look like. "It's just built into the life that I already lead," he says. "And I think I can say similar for Shahana. I know that the larger world either isn't cognizant or doesn't care about things like this, and for that we have to fight. We have to be vocal and push for visibility that creates equitability. I hope to make it clear that inclusivity isn't just a sensible way to exist, it's the only way."

Don't miss the PAPER premiere of "Fall Back," below.