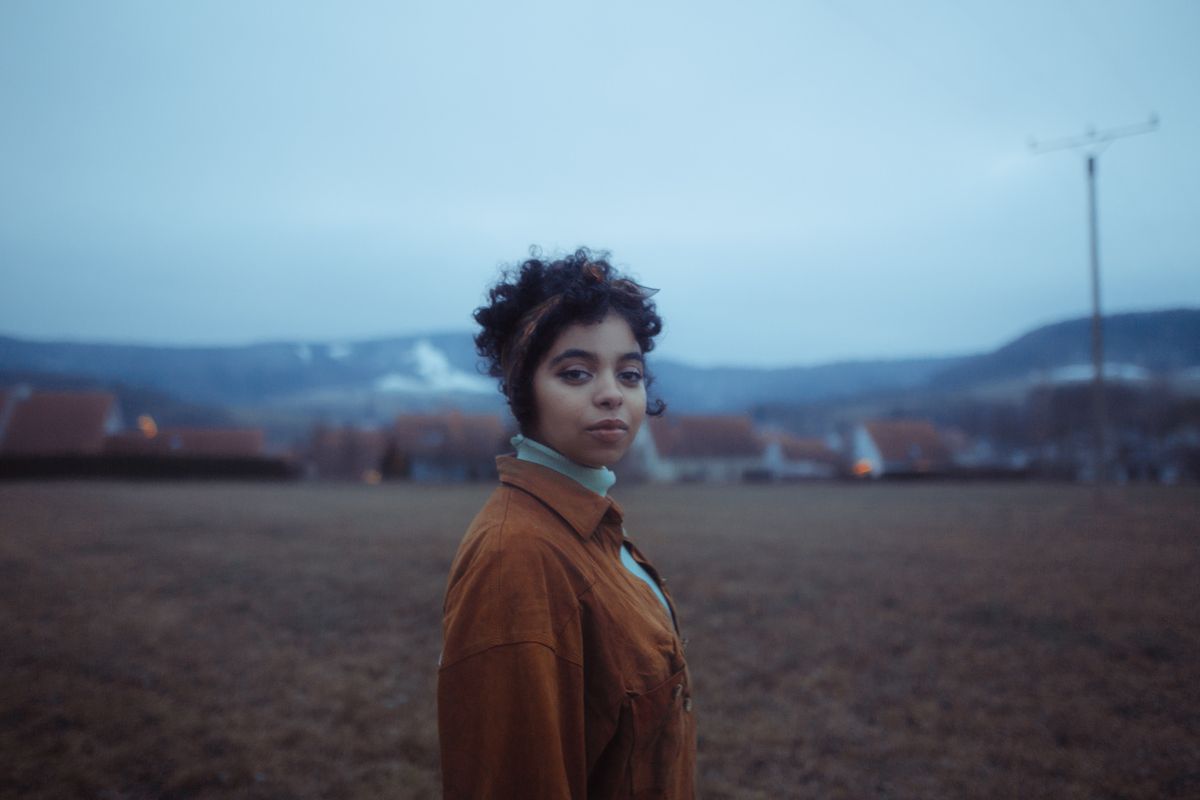 Candace Camacho makes the kind of music you might listen to in lieu of attending spiritual services. Under the name duendita, stylized as such because she "only really upper case[s] notions to God," the 23-year-old Queens native's debut project, the 10-track direct line to My Creator, has already caused a stir. The project, which served as Camacho's senior thesis project but sounds as equally polished and inventive as any major label output, begins with a dial tone and ends with a phone hanging up, and as Vrinda Jagota at Pitchfork writes is "expertly sequenced and intentionally self-contained."

For standout track "Magdalena," a 3-minute track that begins like a sparse piano lullaby — or even a hymn opining for divine (and by the transitive property, self) love — builds into a final third that is as blissful as it is layered. The video, premiering on PAPER below, was directed by Sandy Ismail and Godfred Sedano in an effort Camacho describes as nothing less than pure creative collaboration.

The video follows two young cousins as they go about a day in Queens, followed by a mythical and somewhat unsettling creature that Camacho hints is a representation of both grief and faith. We caught up with the soul singer to learn more about the song's meaning and what's next for her:

The visuals for "Magdalena" are so striking. What were you inspired by and what do they represent?

The video is a collaborative moment between me and my friends Sandy and Godfred. It's also a collaborative moment with the past. It was a reflection on love and loss, but also always being protected and having an angel or spirit near you. We were inspired by Spirited Away and a lot of animé and funny, beautiful fictions of death and transcendence. We just wanted to have our own conversation with that through the lens of the song, which is about my aunt who passed away.

Is "Magdalena" your aunt, or representative of that relationship?

Yes, the film is not necessarily as autobiographical, it's more so just an extension of that story. But it's a bit representative of my experience just being a person that comes from a family, and having to watch that family die, and just knowing that also I will die. direct line to My Creator is very existential and deals a lot with purposeful questions like: why are we here, and what am I doing, and what is this life for?

The relationship between the two girls was really sweet and also relatable to that experience of just killing time and spending the day alone with your sibling or friend.

Yeah they're super cute and sweet, and it was supposed to kind of represent my relationship with my cousin, which is something I think a lot of people (especially immigrants) can relate to. Your relationship with your cousin is like your sibling, just because of how close-knit your family becomes trying to survive and trying to live in New York City. So, my cousin is my best friend; she's only three years older than me, and I actually call her my Day Zero because she knew me when I was in my mom's belly, and that's something so deep. Even though we're from the same bloodline, we have such different life experiences and we're just having our own realities. That relationship has taught me so much, so it was important to me to represent that in the music video because it has impacted my life so much.

In other interviews you've talked about how important community is to you, as an artist and a person and spiritual person.

The directors of the video — they're some of my closest friends. They're filmmakers, and I work on their films, too, giving vocals here and there when I can. They also come to my house late at night and we play Uno! So there's a collective of us, and we like to just get together and know that we're going through life together. It's actually quite comforting, and it's something that makes sense as far as my basic function as a human on this planet to gather with other people physically and discuss this experience. I'm also working a lot more in Berlin, and I'm thinking about what it looks like to have a global conversation with a bunch of different people from different backgrounds, collaborating on a project. It's this really beautiful thing — borderless collaboration. It's the idea of building family, and knowing that a family can take many shapes and forms and include many different kinds of people. At the end of the day, we just love each other and express ourselves and to me, that's community.