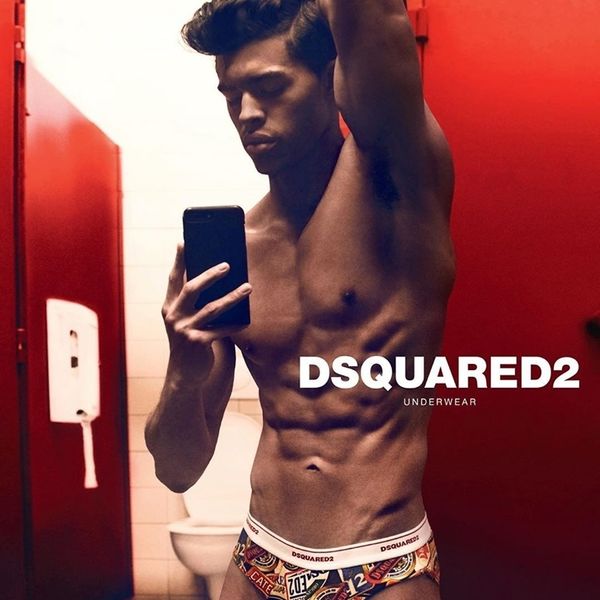 At any given moment in the cursed year 2019, you're either flexing or watching someone else flex. It's a vicious cycle — selfie angles are stressful, and gym memberships don't come cheap! So may we suggest taking a break from your own feed and enjoying an artfully curated one instead, courtesy of Dsquared². The label has once again partnered with Steven Klein for its latest underwear campaign, which sees some of Instagram's cutest boys stripping down for the phone camera.

Yes. This advertisement, with art direction by Giovanni Bianco, is literally a series of Instagram Stories with a fashun world twist. Yes, it happens to star the pecs and packages of Devin Truss, Diego Villarreal, Matthew Van De Sande, August Gonét, Alec Nysten, and Vincent Kowalski. Yes, everyone on your follow list needs to step up their game.

In case your eyes strayed from underwear to abs, the new season Dsquared² underwear designs feature retro beer labels, lace, zebra stripes, as well as some more anonymous monochromatic options. Trunks and briefs! Both equally suited to the front-facing cam.

Dsquared² designers Dean and Dan Caten posted an abridged version of the clip to the grid. You can shop for new thirst trap accessories while watching the full version on their official website, here.