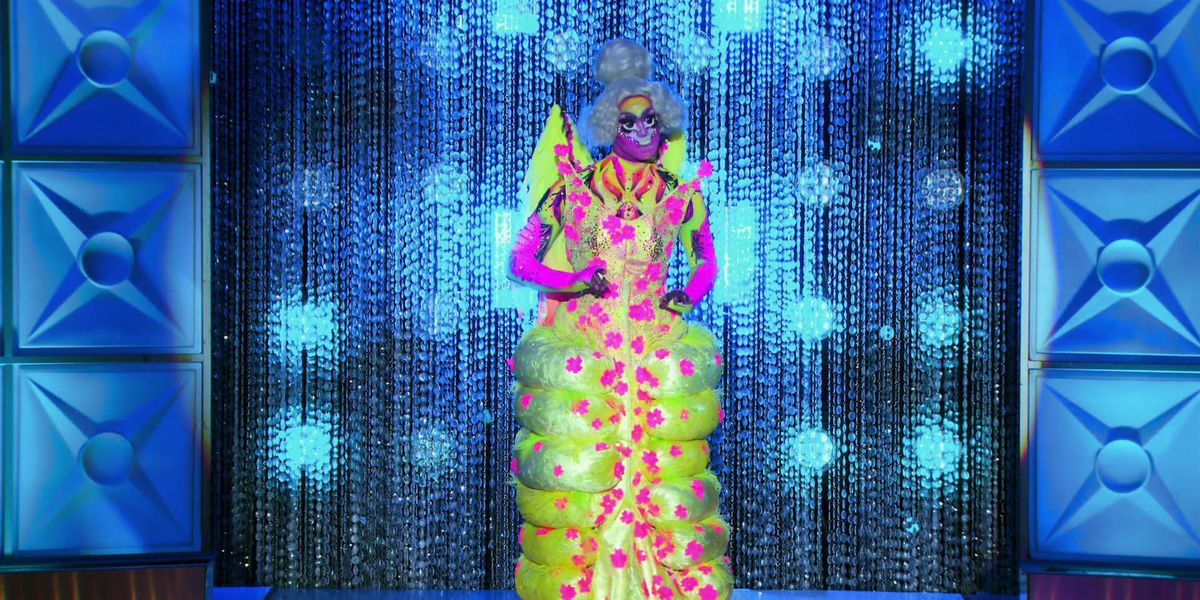 In 2021, though, judges and viewers expect nothing less than a head-to-toe look. Which creates questions around execution. While some queens conceptualize and in some cases sew their own clothes, others hire designers to craft intricate custom garments. There's no issue with the latter category — this isn't Project Runway, after all — until a queen is placed in the bottom two for a runway look that she constructed poorly due to timing and financial constraints.

Related | Why Did It Take 'Vogue' So Long to Give Drag Queens a Cover?

According to Scott Ormston, who runs the popular instagram account @fashioncandrag, the refusal to acknowledge or highlight queens who have created their own garments encourages contestants to commission and replicate designer looks instead, in an effort to reach the show's increasingly high bar for runway glory.

"Whilst I love Gottmik, to see the looks she brought from home that were created by a well-known celebrity costume designer take the design challenge win over the garment Utica created on the show — which has been heralded as the best design challenge look ever — is mind-blowing," he says. "It feels that design skills are so underappreciated that the design challenge can now be purchased."

Over the years, Drag Race has produced a cottage industry of drag designers, some of whom can earn an entire living by creating looks for the show or for a queen's post-show "glow up." Such has been the case for Florence D'Lee, who had just left his job as a costume maker in a Broadway studio when he got the call from Sasha Velour asking him to create one of her season nine finale looks.

"So much of a designer's client base in this industry comes by word of mouth," D'Lee says. "You make something for one Drag Race girl, and then when they tour they spread the word on who made what outfits. Networking is always vital in any career, but I'd say in the queer art community it is absolutely essential."

Since season nine, D'Lee has gotten work on every season of both Drag Race and All Stars, as well as post-production tours, meet and greets and music videos for eliminated contestants. All this exposure has laid a solid foundation for his brand: "There is really no better advertising than having an international television show to show off some of your best looks."

D'Lee was at the forefront of the show's heightened emphasis on fashion. The shift occurred around season seven, when Drag Race viewership surged and social media took hold: prior to then, appearing on Drag Race did not have the career jolt that it packs today. Fashion has always influenced drag. Now, it feels like drag influences fashion. Thanks to Instagram and adjacent Drag Race digital series like Fashion Photo RuView, Whatcha Packin' and The Pit Stop, Drag Race queens are often being looked to as trendsetters themselves. Even if they had nothing to do with their own designs.

D'Lee isn't too bothered by the lack of credit given on the show to the designs he meticulously creates. Mainly because he still sees a huge social media boost when his work appears online.

"Every time a queen from the current season airing posts a photo in your look, BAM, you see an immediate increase in activity and following on your own account," he explains. "So even though designers are not credited first hand on the show, I believe for the most part that we get the credit where it counts." (It's worth noting that design teams often go uncredited in the fashion industry at large.)

A larger issue is that design teams can take away from the scrappy craftiness that was once fundamental to drag. Take this Delta Work "bikini" from season three as an example of a look (one I love, mind you) that would no longer meet the bar. "It's just a T-shirt," I can hear Michelle Visage saying in my head, if this look were to sashay down the season 13 runway.

And designer costumes can be homogenous. "The world of Drag Race is a very trendy one, and a lot of queens get very complacent and lazy once they get on their season and start touring," says Kim Chi, a finalist on the eighth season of the series. "They literally take screenshots of another Drag Race queen wearing something, send it to that exact designer and say 'I want this in blue and add sleeves to hide my arms.'"

Kim Chi thinks this is likely why people find the runways of Drag Race UK, Holland and Thailand increasingly refreshing: "Because it's not the same five designers we've seen over and over on the US version of Drag Race."

A seemingly simple solution to the show's fashion excesses would be to enforce a Drag Race runway budget cap. Especially knowing that some queens have gone so far as to mortgage their homes in order to afford runway looks. But now that the drag fashion industry has been built up, it's difficult to tear down.

"I think a budget cap would actively work against the designers and creatives that now rely on drag race commissions as part of their income, and would also be difficult to enforce," says Ormston. "At the end of the day there are contestants such as Yvie Oddly who are able to innovate and create beautiful looks even without budget, which I think speaks to the true nature of drag — creating beauty and extravagance under constraints."

Related | Do Straight People Know About the Pink Nike Sweater?

Kim Chi, who created much of her Drag Race wardrobe before appearing on the show and thrifts for supplies, is inclined to agree: "I think it's up to the queens to be resourceful and utilize their money well before going on the show."

The precedent has been set. Some contestants — those who can afford it — are always going to spend in the tens of thousands of dollars on their big shot at fame. "And that's their choice. But you know how much I spent to prepare for season eight? $1500."