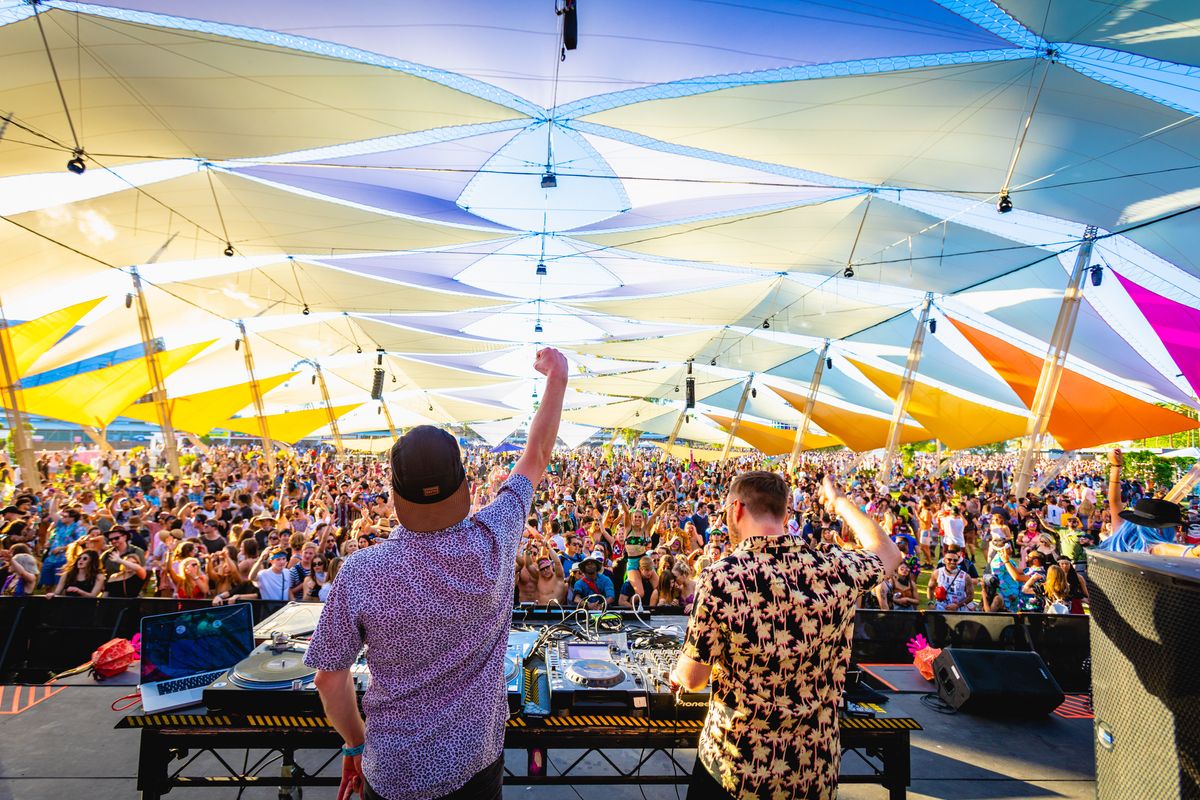 In its current iteration, Coachella tends to conjure images of sun-bronzed influencers bedecked with glitter and wearing other peoples' cultures as casual accessories. Coupled with its sheer size and reputation for being a celebrity hotspot, embracing "Nochella" as a personality trait can start to feel like it actually makes sense. But in spite of its perception, Coachella, like any festival, is largely what you make it. If the idea of a 60,000 plus crowd packed against the main stage like sardines sounds like your personal nightmare, there are certainly alternative spaces that offer a reprieve from crowds. One of the most enduring is the Do LaB Stage, which has quietly provided a springboard for emerging artists for 15 years.

Founded by brothers Josh, Jesse and Dede Flemming — who are also the minds behind the eco-facing Lightning In A Bottle festival — Do LaB started as a community art project between friends. "It wasn't started to be a production company, it was a collective of artists," Josh shared from the festival grounds. "Back then, festival culture wasn't a thing in America, so when got the opportunity to come out to Coachella in 2005 it was to build a small art project in the middle of the field."

Armed with a few thousand dollars and a shared background in production and design, the brothers built a 60-foot geometeric dome filled with sculptures and a fountain they dubbed "The Misting Oasis." In its early years, Coachella took place in April when temperatures in Indio easily skyrocket to 110 degrees or more. Do LaB's misting features were the only place on the grounds attendees could go to cool down; to this day, their buildouts always include a water element.

They also set up a few Mackie speakers and invited friends to DJ throughout the day and into the night after the festival ended. "Everything shut down at midnight so we just started throwing parties. The police were kicking everyone out except for us — since we were there and partying, they kind of assumed it was sanctioned by the festival and we just said 'fuck it, we'll keep going until someone stops us,' and that's really how the music aspect started. People don't realize this but Coachella came from punk rock culture. Goldenvoice was an old punk rock promoter so starting off they were very renegade."

By 2012, the brothers had expanded Do LaB's buildout and started to invite larger acts to play surprise sets — Major Lazer, ZHU, RL Grime and Glitch Mob are among those who have made appearances over the years. At the same time, Coachella was also undergoing a transformation. What was once a small-scale gathering with little infrastructure was shifting into a behemoth festival, emphasizing powerhouse acts and large-scale art initiatives. For its part, Do LaB expanded in the opposite direction, leveraging the brothers' grassroots connection to underground culture to curate a discovery space for emerging musicians.

Related | Friends With You Brought Childlike Optimism to Coachella

For instance, Bassnectar, who played the Do LaB stage in 2007 closed the Outdoor Theater this year to a crowd of more than 70,000 people. "I think that's part of the reason Coachella embraces us," said Jesse. "We bring an element of underground culture and a platform for new artists to show up."