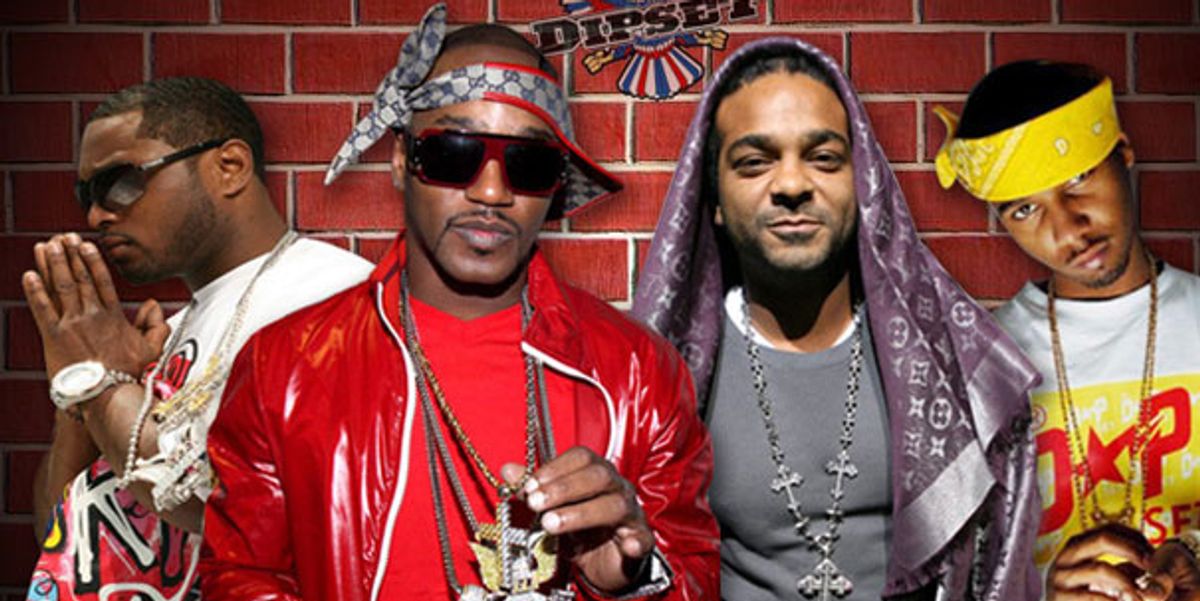 Dipset Is Back, So Here Are 6 Iconic Moments We Still Cherish

Looking at the group's enduring influence.

Harlem rap collective The Diplomats, commonly known as Dipset, are back! That's right: OG members Cam'ron, Jim Jones, Juelz Santana, and Freekey Zekey, have announced that their first new album as a group in 14 years, Diplomatic Ties is out on Thanksgiving, which falls on November 22 this year. (We should've seen this coming when the group released "Once Upon a Time" last year and "Stronger" on this summer's Uncle Drew soundtrack, after their official reunion party this spring.)

The album is their third overall, following their blockbuster 2003 debut, Diplomatic Immunity, and its sequel the following year. The group's members, which also once included J.R. Writer, Hell Rell, and 40 Cal, splintered off into solo projects over the years, too, always shouting out their original crew and maintaining a refreshing spirit of collaboration. It can be argued that Dipset's influence, which had immense crossover appeal, also ushered in new and numerous iterations of "party rap," where pioneering acts like Lil Jon (and his group the East Side Boyz, whose last album together was 2004's Crunk Juice), Soulja Boy, Mims, Ying Yang Twins, J-Kwon, and countless others reigned supreme in the early-to-mid aughts. Here are some celebratory moments from a glorious, glamorous, and delightfully gaudy era in hip-hop — so like, 2002 to maybe 2010, where Dipset pretty much defined what it meant to be the life of the party, without sacrificing their hard-hitting sound.

Ballin'! This song's original version, boosted by the strength of this all-star remix, soared to the top of the American charts in 2006. There are also cameos by Lil' Wayne and the aforementioned former Dipset member, J.R. Writer, for all you stans out there. This song also, in hip-hop lore, famously sparked a Jim Jones diss track in which Jay-Z rapped over the same beat, called "Brooklyn High." Jones and Juelz Santana responded with another track the next day. This song also enjoyed popularity in the NFL, when former New York Giants' defensive end and current Good Morning America host Michael Strahan and teammates took jump shots to celebrate sacks against the Washington Redskins, which created a viral dance video Jones called the Fadeaway. Even WWE wrestlers did jump shots during matches. Soulja Boy even sampled the song on "Report Card" from his debut album. It was a wave!

In the video to "Oh Boy," honoring Cam'ron and Santana's Harlem roots, there are cameos by Damon Dash, La La Anthony, Angie Martinez, and other New York entertainment icons. The catchy, Just Blaze-produced song is from Cam'ron's third solo album Come Home with Me, topped the charts for its instant recognizability (and maybe also its coy heroin reference), we were also excited when none other than Mariah Carey made sampled this song for "Boy (I Need You)" from 2002's Charmbracelet, which received an anime-inspired visual treatment of its own and was created as a "response" to Cam'ron's original. And to think that this song was almost given to Memphis Bleek (remember him?), though we'd be curious to hear what that version would've sounded like.

This song and video by a clearly iconic duo are important for many reasons (mostly for being so much fun) but this will always stand out to me as the moment Cam'ron pretty much invented the slogal "real men wear pink," introducing a slew of still-more memorable looks including but not limited to Cam'ron's love of blending colorful fur coats with matching hats. Glam! (We do hope though, that if Cam still does these looks, that he buys cruelty-free, because that's mega-important.) Also, Toya sang the hook on this ubiquitous 2003 tune. OMG remember her? She once played a nerd-turned-vixen character in the high school-themed video for "I Do!!", which was everywhere at one point. Wait, where's Toya these days?

Everybody knows this song. The end. You might have been booted from your high school sock hop by twerking aggressively and disturbing the teachers — what, just me? — but you know this song, and 2.) Something I can say with absolutely certainty about this decadent clip from Jim Jones and company is that the Dipset crew sure does love a cameo. But the era they pioneered was ripe for surprise appearances. Bring back random cameos! In this clip, we get appearances by Busta Rhymes, Mike Epps and Jessica Rich (aka "Rabbit") from Real Chance of Love, for your nostalgia-loving nerves.

Juelz Santana, "There It Go (The Whistle Song)"

Here is Juelz's big moment. I'll amend what I said previously by admitting that this song got me in so much trouble with teachers supervising those sock hops. I was told I was being "fast" and needed to sit my "hot tail" down someplace, which wasn't wrong. But regardless of my personal experience with this song as a barely-teen ho, this song is just an unadulterated, full stop banger. Nevermind that no one should whistle at anyone of interest on the street, in the club, in the checkout line, etc, but this was made in 2004, so we'll let this slide. Also, Keyshia Cole happens to be in this video, so again, with the notable, surprise cameos.

The whole crew, and the reason why we're all here. If you've made it this far: You're welcome and amen.

Also, check out some chic merch from the band, here.